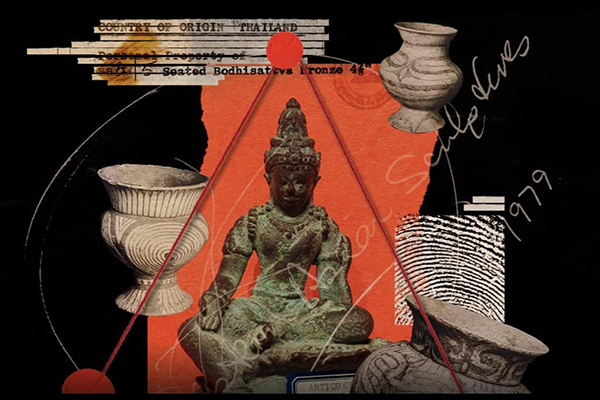 I’ve picked up the stone head of Lord Vishnu, the ultimate protector of the universe. It’s heavy, my fingers are slipping, and I think I’m about to drop him.

It’s a sculpture separated by time and space, carved by unknown hands an estimated 1,200 years ago.

Instead of being in its ancient jungle home, perhaps a temple, it’s propping up firewood inside a dusty garage on the NSW mid-north coast.

Hundreds of works like this arrived in Australia in the 60s and 70s.

But the story of how they got here has never been told.

For four months, I’ve been investigating these works for Background Briefing and what I’ve found is alarming: a story of dodgy dealers, looted temples and some of the world’s most exclusive collections. 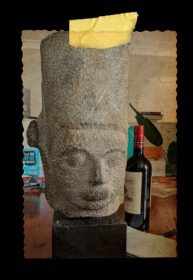 When I finally heave Lord Vishnu onto the dining table, his unblinking eyes stare at me.

I ask the owner whether this and other artefacts were potentially stolen. He shrugs.

In the jungles of Cambodia, Sopheap Meas is lifting old curses.

She’s an archeologist working for the Cambodian government and her job is to find ancient Khmer artefacts stolen from her country.

To many in Cambodia, the artworks are not just stone artefacts but “living” gods. To them, these sculptures weren’t stolen, they were kidnapped.

“It’s like they lost their ancestor, an ancestral spirit,” she says.

“So when they see the temple, they say, ‘I don’t want to go there because the God is not there, the God is living outside of the country.’”

Hundreds, if not thousands, of sculptures were smuggled out in the 60s and 70s, which were violent, desperate years for Cambodia.

Cambodia was a casualty of the Vietnam War, then the Khmer Rouge orchestrated a bloody revolution and herded the population into farming slave camps now known as “the Killing Fields”.

While Cambodia was being pillaged, the trade in stolen antiquities was booming. It was a smuggler’s paradise.

Refugees fleeing the country brought sculptures across the border to Thailand, where there were dealers ready to receive them.

But there was also organised theft of antiquities on a vast scale. In one case, soldiers closed off an entire temple complex, raided it during the night and carried off their spoils by helicopter.

Some looters have never forgotten their past misdeeds. Many feel they are cursed and this guilt has led them to Sopheap.

“Here, we really strongly believe in bad karma: people want to be born with God when they pass away,” she says.

The looters are sharing with Sopheap the stories of their theft, including the disturbing details of sculptures being hacked up and sold off.

As she listens to these stories, Sopheap struggles to contain her sadness.

“I cry, my hands are just shaking a lot,” she says.

“I almost fall down … it’s so painful to hear what happened to those objects.”

While she tracks down the statues in the field, another part of her team traces the journey of these works overseas.

“Australia is on our radar,” says her colleague Bradley Gordon, a lawyer working with the Cambodian Ministry of Culture.

“We know that a number of statues ended up there.”

And as my investigation has revealed, these artefacts have been hiding in plain view.

In July of 1974, the Australian Museum in Sydney hosted an exhibition of more than 100 Khmer and Thai artefacts from one of the most exclusive and extensive private collections of the day. 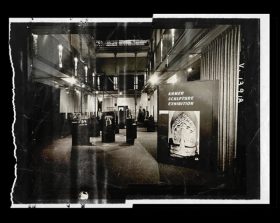 “The collection not only presents some fine examples of Khmer art but also attempts to show the influence the Khmers had on their neighbours.”

The dramatic centrepiece was a five-headed serpent rearing up on its tail, described as a “Naga ornament”.

The heads are framed by a hood, embellished with flourishes and decoration. The sculptor even captured the individual scales of the undulating snakeskin.

But something about the description is problematic: “From Preah Vihear temple on the border of Cambodia and Thailand.” 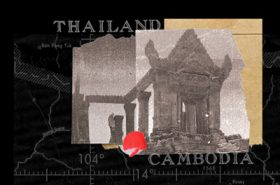 Preah Vihear is an ancient temple perched on a cliff that straddles the Thai-Cambodian border.

“In the art market generally, if you can identify the place where something came from, that’s seen to enhance the marketability of the object,” says Asian art expert Angela Chiu.

“This shows how the art market has turned this very disturbing provenance of the object into not something that should concern us about looting, but instead about marketability.”

So who did all these works belong to?

The ‘man from Hollywood’

Frozen in the camera flash for the Women’s Weekly “People and Fashion” pages stands a grey-haired man with a pencil moustache, beside an auburn-haired woman in a fur coat. 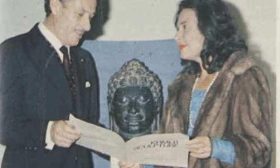 The photo is captioned: “The consul-general of the Khmer Republic, Mr. Doug Snelling, and Mrs. Snelling, lent their valuable collection of Cambodian sculptures for the art exhibition currently on view at the Australian Museum”.

Once I start digging into Douglas Snelling, I find he’s a person who seems to defy definition.

He worked as a writer, a publicist, a radio personality, a munitions factory worker, a representative of a foreign government and a Hollywood sketch artist.

But it’s perhaps his architecture and furniture design that he is best known for.

I track down a person who may just know more about Douglas Snelling than anyone else in the country — writer Davina Jackson, who wrote Snelling’s biography. 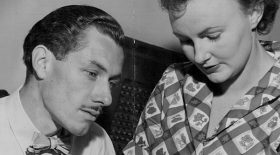 The Errol-Flynn look-a-like, Douglas Snelling, had many careers and many interests. Sydney Morning Herald.

“Snelling was very glamorous,” she tells me.

“I come from a background at Vogue Living and then the design magazines, and we’re always very, very interested in those particular magazines in glamour.”

She says he began his career in the late 1930s in America, where he hung out with some of the biggest stars of the day.

“He had met Errol Flynn and David Niven and the young Shirley Temple and quite a lot of you know, emerging stars, Laurel and Hardy …”

His passion for Khmer art began when he visited Cambodia during his honeymoon with his second wife, Patricia. 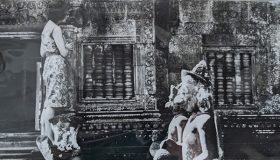 The trip also brought him into contact with the Cambodian ruler, Prince Norodom Sihanouk.

After returning from the honeymoon he continued the relationship with Sihanouk and the Cambodian elite, culminating in his appointment as Honorary Consul in 1970.

As Snelling’s star was rising, he became famous for his furniture design.

Buried in the ABC archives, I find an interview with Snelling from 1976 about his signature product — the “Snelling chair”. 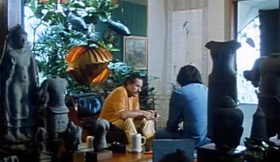 The Four Corners footage shows Snelling in his living room: an Aladdin’s cave of Khmer and Thai artworks.

There are seated Buddhas, torsos on wooden plinths and a majestic Dvaravati with free-flowing robes and a hand held up in Katakahasta.

Dr Jackson has a hot tip on where it all came from. Her research notes are at the State Library of NSW, and among them are letters from Snelling which might reveal where he acquired the works.

At the State Library, Douglas Snelling’s life and achievements have been condensed into 11 cardboard boxes.

And in those boxes, I discover an extraordinary letter from November 8, 1965, addressed to a close friend. 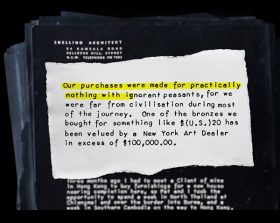 “Three months ago I had to meet a client in Hong Kong … so Patricia and I took the opportunity to spend a week in North Thailand … We had an absolutely wonderful time, and acquired many Cambodian antiquities in stone and bronze.

“Apart from some small bronzes given to us by the Royal Family in Cambodia, we acquired our other Angkor pieces outside the borders of Cambodia. Some of these we had to smuggle out of Thailand, even though they were originally stolen from Angkor.

“Our purchases were made for practically nothing with ignorant peasants, for we were far from civilisation for most of the journey. One of the bronzes we bought for something like $US20 has been valued by a New York art dealer in excess of $100,000.

“This sounds crazy I know, but similar extraordinary values apply to all the pieces we have, and we now have about 20.

“… One of the stone pieces, a seven-headed Naga with Buddha head, is carved out of basalt and weighs about 400lbs. The most valuable bronze piece, which I figured to be worth about $5,000, I never let out of my sight and carted it all the way through Asia back to Sydney.”

I flick through my notes. The seven-headed naga was captured in the Four Corners footage of Snelling’s living room.

Positions Vacant » View All
» Collections and Database Administrator – QVMAG
» Team Leader Learning & Engagement – QVMAG
Latest News » View All
British Library £500m community-focused extn
through planning major planning hurdle Read more.
Thornborough Henges off Heritage at Risk
Tarmac gifts to Historic England Read more.
AWMM’s Secrets of Stonehenge
- secrets explained – mystery remains Read more.
The half-formed idea of Aus: Julianne Schultz
on the importance of recognition Read more.
QMN’s World Science Festival & Curiocity
2023 incl Meganne Christian & Brian Greene Read more.
Top +
Council of Australasian Museum Directors c/o Lynley Crosswell, Museums Victoria, GPO Box 666, Melbourne VIC 3001, © CAMD 2023
Copyright: All information and resources provided on this website remain the copyright of the Council of Australasian Museum Directors. Permission is granted for viewing and downloading for personal and not for profit purposes. Those wishing to reproduce any materials for commercial, educational or other uses are requested to contact us.
Disclaimer: The content of this website is provided for information purposes only and is not intended as a substitute for professional advice. No claim is made as to the accuracy or authenticity of the content of the website. The Council of Australasian Museum Directors does not accept any liability to any person for the information or advice (or the use of such information or advice) which is provided on this website. The information on our website is provided on the basis that all persons accessing the site undertake responsibility for assessing the relevance and accuracy of its content. No responsibility is taken for any information or services which may appear on any linked web sites. Hostgator.
.