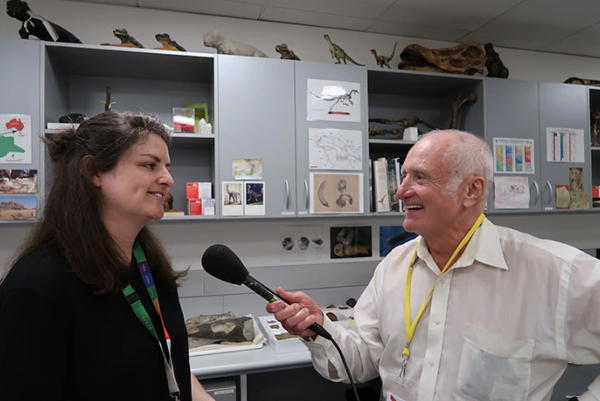 Robyn Williams interviewing Melbourne Museum’s Hazel Richards about the fate of the dinosaurs in his 50th year of broadcasting.(Supplied: Museums Victoria/Thomas Holloway).

Natasha Johnson, Robyn Williams, host of ABC RN’s The Science Show, on 50 years of broadcasting and the day Norman Swan saved his life, ABC Backstory, 28 May 202

As astronauts on board Apollo 17 carried out a momentous mission in December 1972 — the first Moon landing by a scientist-astronaut, Harrison Schmitt, and the last opportunity (so far) for humans to walk on the lunar landscape — a young Robyn Williams found himself taking a giant leap into the broadcasting unknown.

Earlier that year, the 28-year-old science (honours) graduate from the University of London had turned up at the ABC Science Unit looking for a job and, luckily, in what he calls a “sliding doors” moment, science journalist Max Bourke (future head of the Australia Council and founding director of the Heritage Council) had just resigned, and Williams was hired as a “gopher”. 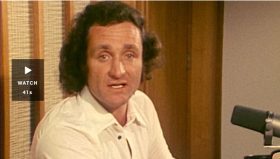 “They needed a gopher because during the Apollo missions that year — Apollo 16 launched in April — they wanted someone to collect facts for the broadcasters. For example, ‘If you put the rocket next to the AMP building at Circular Quay, which will be higher?’ That sort of thing,” Williams recalls.

“We’d be on air for about 24 hours a day. The ABC cleared the decks and we went live everywhere. We got messages from the astronauts on the Apollo. And then they landed on the Moon, and I thought, ‘Holy shit, this is happening, they’re actually doing it.’ It was very exciting.”

While studying in the UK, Williams had done some part-time acting, appearing as an extra on BBC television shows such as Doctor Who, Monty Python’s Flying Circus and The Goodies — and working alongside stars such as Tom Jones, John Cleese, and Peter Sellers — but he had no on-air radio broadcasting experience.

His work had been behind the scenes during the space broadcasts. Then, as the voices of the astronauts on Apollo 17 were aired on the ABC, Williams was suddenly presented with a sink-or-swim moment.

“[Director of the ABC Science Unit] Peter Pockley had been on air, brilliantly, for hours and he looked through the glass of the radio studio to where I was sitting, feeding him information, and he said, ‘OK, I’m going off now. Come in, sit there, there’s the switch, take over.’ And that was my training!” says Williams.

“But the point about doing five years of TV [previously], where I was often on live TV doing very simple things — like making sure you didn’t fall over the furniture or get in the way of the dancers — I knew how to deal with a live situation and perform how you’re supposed to. I’d learned how to concentrate, and I just thought, ‘Well, I’m just in a room and I’m talking to one person out there’.

“We were doing the first phone-ins [from listeners] on the ABC. Only the commercial stations had done phone-ins at that stage and the ABC didn’t have the equipment, so we used an army field telephone. I just concentrated on how to switch [callers] on and off and I was just so genuinely excited.”

It was the launch of a remarkable 50 years of broadcasting on the ABC.

After his on-air debut during the Apollo broadcasts, Williams worked on innovative radio programs produced by the Science Unit, including a three-hour episode of the “Investigations” series called The Media Game, which he later described as “the worst radio disaster I have ever experienced”.

Featuring media baron Kerry Packer and a line-up of leading journalists and editors, it provided a mortifying lesson on the danger of mixing alcohol and live radio, as Williams recalled in his book, Here Come the Philistines, published in 1989:

“I faced this line-up with experience of only one programme as a ‘live’ presenter and with no formal training whatsoever. I was assured that, on a signal from me, all present would attack Kerry Packer, and all I would have to do was interrupt now and then as a restrained but civilised mediator. No-one warned me of the quiet time needed before you present such a mammoth broadcast; instead, I was running to the pub to fetch scotch for the distinguished company who wanted more than the little wine we had thought of. Once under way, it was clear that more than one guest had become ‘tired and emotional’, and far from attacking Kerry Packer, they turned to attack me as representative of that snooty ABC, which dared criticise the commercial media. Paddy McGuinness took to opening beer cans as explosively and as close to the microphone as he could manage. The resulting shambles was appalling beyond belief. But the very odd thing was: we were not taken off. [General manager] Talbot Duckmanton even sent a note of congratulations. We assumed he had got the date wrong, had not heard the disastrous edition, but meant it for the launch. Then a nice man from management gave me a pep talk … and on we went.”

That he was urged to simply move on from such a spectacular failure was indicative of a spirit of radical experimentation and unbridled creative energy that, Williams recalls, throbbed at the ABC at the time. 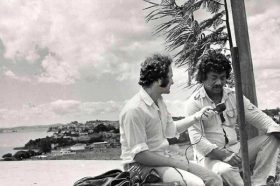 Robyn Williams in New Zealand in 1976 doing interviews for a program on Maori culture.(Supplied: Robyn Williams).

“The Science Unit had the most extraordinarily bright people, everyone was an intellectual star, personally wonderful,” he says.

“The ABC had then something called the Radio Action Movement, [a group of staff] which included heads of department, and it was all about loosening up the stodgy old stuff, going for big ideas and seeing where new technology could take us — what could be done using satellites.

“We were inventing programs, such as Lateline, that would take over the airwaves, sometimes for hours — we’d interview Jean-Paul Sartre and Simone de Beauvoir — overseas — together about existentialism.

“The famous in far-away places were touched by calls from well-read broadcasters in Oz — like Pierre Vicary [later a star in disguise in Tony Jones’s thriller novels] who spoke fluent French, and others, such as Malcolm Long, who brought formidable intellects to the airwaves.

“It was never before like this. The world opened up. We were breaking the rules and also being very cheeky.”

It was in this fertile environment, in 1975, that The Science Show, a one-hour program discussing a broad range of scientific issues, developments and debates — plus staging a few controversial pranks, more on the outrage over the fossilised beer can later — was born. 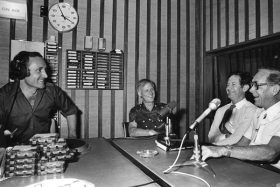 Robyn Williams interviews Professor Charles Birch from Sydney University and Dr Telford Conlon, one of the first advisers to a federal Science minister, in 1983.(ABC Archives).