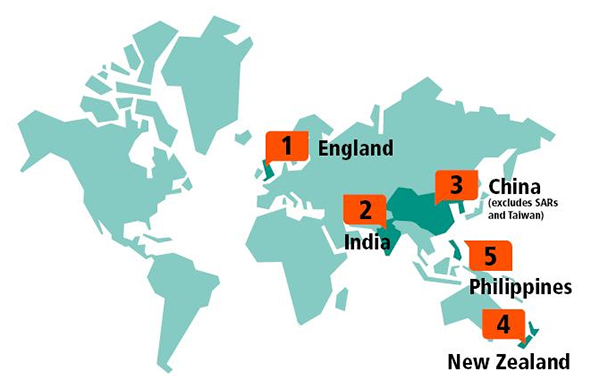 The Census collects a range of information that allows us to measure Australia’s cultural and ethnic diversity. Since the end of World War II, the proportion of overseas-born and second generation migrants in Australia has steadily increased. It is the suite of cultural diversity questions in the Census such as ancestry, country of birth, English proficiency, language spoken, Indigenous status and religious affiliation, which allow us to better understand the increasing complexity and growing ethnic diversity in Australia.

The terms ‘ethnicity’ and ‘ethnic’ can be associated with different meanings and there is no internationally agreed definition. The ABS has adopted a multidimensional approach to understand ethnicity in Australia. This approach was recommended by Borrie[1] and is consistent with the Law Lords definition of ‘ethnicity’ which refers to the shared identity or similarity of a group of people based on one or more distinguishing characteristics.

For more information on measuring cultural and ethnic diversity see Standards for Statistics on Cultural and Language Diversity and Australian Standard Classification of Cultural and Ethnic Groups (ASCCEG).

First generation Australians are people living in Australia who were born overseas.

Second generation Australians are Australian-born people living in Australia, with at least one parent born overseas.

In the first Census in 1911, the proportion of people living in Australia who were born overseas was 17.7%. The graph below shows how this has changed over time as economic, political, and social factors – including wars and immigration policies – have have influenced Australia’s migration patterns.

From 1911 to 1947, the proportion of people in Australia who were born overseas dropped to a low of 9.8% as migration was impacted by two World Wars and two major economic depressions[2]. From 1947, the proportion of overseas-born counted in the Census increased because of the post-war migration program, which included intakes of displaced persons and refugees from European countries.

Migration continued throughout the second half of the 20th century directed at population growth and economic development, and in response to humanitarian events in eastern Europe and Asia[3].

Since 2006, the proportion of people who were born overseas has increased more sharply, influenced by changes to Australia’s immigration policy including an increase in the intake of skilled migrants. 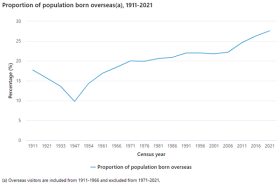 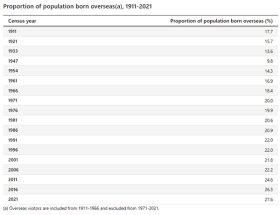