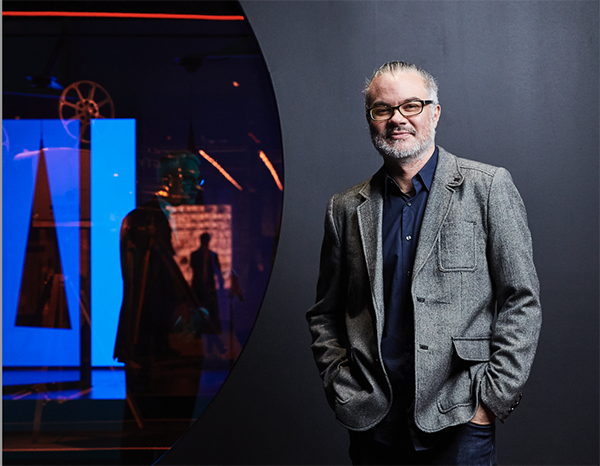 ACMI Board President Janet Matton AM has announced the appointment of the organisation’s Chief Experience Officer, Seb Chan, to the role of Director & CEO, following a global search for an inspirational leader who will continue to evolve Australia’s national museum of screen culture, after its 40-million-dollar renewal and transformation into a multiplatform museum.

ACMI Board President Janet Matton AM said: “The ACMI Board has enormous confidence and enthusiasm in appointing Seb Chan to the role of Director & CEO of ACMI. Despite healthy competition for this pivotal leadership position, Seb impressed us with his vision for the museum’s ongoing sustainability and his track record in delivering outstanding creative direction and partnerships during his seven years as ACMI’s Chief Experience Officer and trailblazing work for international museums.”

Relocating from New York in 2015, Seb was appointed to ACMI’s newly created role of Chief Experience Officer, signalling a pioneering approach to engagement in the Australian museum sector. The role saw Seb take responsibility for the museum’s Experience & Engagement division, guiding teams across visitor experience, marketing, brand and communication design, digital products and technology, plus the museum’s collections, including digitisation and preservation of videogames and interactive art.

Playing a leading role in the award-winning experience design and technology that underpinned ACMI’s renewal, Seb was a driving force behind The Lens, a take-home home device that allows visitors to digitally collect artworks and objects. He also created and heads up ACMI’s CEO Digital Mentoring Program (2021- ongoing), working with leaders across the Australian creative industries to foster their knowledge and understanding of strategic technology.

ACMI Director & CEO Seb Chan said: “It’s a huge honour to be appointed to ACMI’s top job to build upon the incredible work of former Director & CEO Katrina Sedgwick AM. Working with the Victorian Government, our state’s broader cultural ecosystem and the museum’s remarkable team, I look forward to consolidating ACMI.”

“Victoria has always been a global leader in screen innovation, from producing the early 20th century’s first feature film to interactive art of the early 21st century and our burgeoning local videogame scene. ACMI is a place where we gather to watch, play and understand how screen content is made and affects us. More than ever, ACMI provides a vital hub to come together and imagine alternative futures,” said Seb.

Victorian Minister for Creative Industries Steve Dimopoulos said: “ACMI is one of our most innovative, forward-thinking cultural institutions, and Seb is a groundbreaker and leader who brings great vision, imagination, and a deep commitment to making cultural experiences accessible and inclusive for all.”

Prior to ACMI, Seb led the digital renewal and transformation of the Cooper Hewitt Smithsonian Design Museum in New York (2011–15) and the Powerhouse Museum’s pioneering work in open access, mass collaboration and digital experience in the 2000s. Internationally known as a cultural sector innovator, Seb’s work has received a range of international awards across the museum, design and media fields.

Seb is also an adjunct professor at the School of Media and Communications in the College of Design and Social Context at RMIT; an international advisory board member of Art Science Museum (Singapore); and a board member of the National Communications Museum (Melbourne). Currently National President of the Australian Museums and Galleries Association and previously a board member of Diversity Arts Australia, Seb is also an alumnus of the Getty Leadership Institute, Salzburg Global Seminar and University of NSW.

While recruitment for a new CEO took place, ACMI was led by Acting Director & CEO Graham Jephcott, who now resumes his role as Deputy CEO and Executive Director Commercial and Operations.

Janet Matton AM said: “The Board is so grateful to Graham Jephcott and the wider leadership team for maintaining ACMI’s momentum during this time. Graham and the team didn’t miss a beat and will ensure that Seb’s transition into his new role will be as seamless as possible.”

ACMI is Australia’s national museum of screen culture. The museum reopened in February 2021 after a two-year, $40 million redevelopment – an architectural, programmatic and technological transformation. Navigate the universe of film, TV, videogames and art with ACMI. The museum celebrates the wonder and power of the world’s most democratic artform – fostering the next generation of makers, players and watchers. ACMI’s vibrant calendar of exhibitions, screenings, commissions, festivals, and industry and education programs explore the stories, technologies and artists that create our shared screen culture. More at acmi.net.au