AM Eureka Awards 2022 – past Questacon Dir 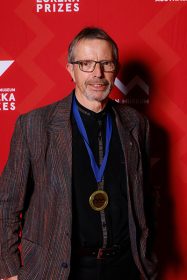 Professor Graham Durant AM, was awarded an AMRI Medal in recognition of his leadership within the museums sector, his support of the Australian Museum, and for championing science and science education in Australia.

The Australian Museum Eureka Prizes are Australia’s most comprehensive national science awards, honouring excellence across the areas of research and innovation, leadership, science engagement, and school science. Presented annually in partnership with some of the nation’s leading scientific institutions, government organisations, universities and corporations, the Eureka Prizes raise the profile of science and science engagement in the community by celebrating outstanding achievement.

Ground-breaking research into how diets impact the environment; new tech that will revolutionise cancer diagnosis; discoveries improving the treatment of sexually transmitted infections; and scientific pioneers spearheading their industries were just some of the winners announced at the 2022 Awards Ceremony, held at the Australian Museum on 31 August.

Former Director of Questacon, Professor Graham Durant AM, was awarded an AMRI Medal in recognition of his leadership within the museums sector, his support of the Australian Museum, and for championing science and science education in Australia. Graham was integral to the development and staging of the Australian Museum’s Spiders exhibition, and as a supporter of citizen science, Graham advocated for the Australian Museum’s successful submission for one of the first citizen science grants from the Commonwealth government. This initial grant kick-started the ground-breaking national citizen science project, FrogID. He was also instrumental in the establishment of the Eureka Prize for Innovation in Citizen Science and has served as a judge for this prize. Most recently, Graham has been a staunch advocate for action on Climate Change across the museum sector internationally and led the encouraged Australian museums to adopt the United Nations Sustainable Development Goals.

You can read more about the Australian Museum Eureka Prizes here.