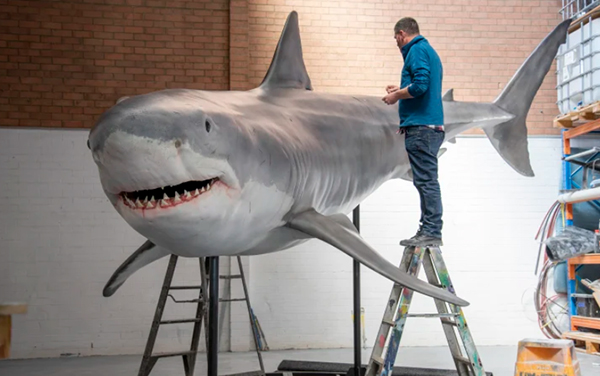 There’s a 230 kilogram, five-metre long great white shark charging along the edge of the Great Australian Bight towards Sydney.

But instead of muscle, blood and cartilage, this shark is made from metal, foam, resin and fibreglass, and it’s barrelling along the Eyre Highway in a truck bound for the Australian Museum.

The museum recruited model maker Daniel Browne, of Perth’s CDM Studio, to create 11 life-size, biologically accurate sharks that range from 40 centimetres to eight metres long for its upcoming exhibition on the ocean’s most notorious creatures.

“[Browne’s team] were so diligent and so driven to get everything spot on,” said Dr Kerryn Parkinson, a technical officer in ichthyology at the museum who guided Browne and his team on the sharks’ biological detail. “We’d consult our specimens and go, OK, the snout needs to be broader, or that dorsal fin needs to be taller.”

Museum specimens ranging from a preserved great white (a “baby” at 2.4 metres) to whale shark fins were used to ensure the models were the correct shape, size and colour. Well-documented species such as tiger sharks and grey nurses also had plenty of photographic reference points. Other species proved more difficult.

“The hardest ones to get agreement on were for specimens we don’t see very often, like the frill shark,” Parkinson said. “It’s a deep-water specimen. It kind of looks a bit eel-like. The gills on it almost have a frilled edge, which gives it its name.” 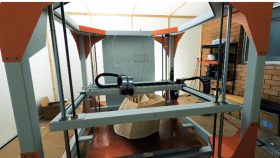 Only one grainy, seconds-long clip and a handful of photos exist of the two-metre long “living fossil”. They lurk at depths of 1300 metres and prey on squid and sea slugs with jaws filled by 300 backwards-pointing teeth.

“We do have one in the collection, fortunately, which helped immeasurably,” Parkinson said.

One of the models is based on a prehistoric fish, the helicoprion. Fossils of the shark-like creature’s teeth baffled scientists; it had a “tooth whorl” for a bottom jaw that resembles a possum’s prehensile tail, if it were barbed with teeth. The anatomy was so bizarre experts debated for decades if the teeth sprang from its bottom jaw, top jaw or even from a dorsal fin. 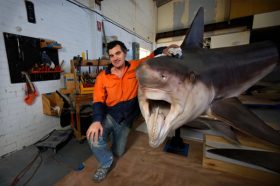 Each of the 11 models began as a symmetrical digital sculpture that the museum’s scientists would check for accuracy. Then the designers would “pose” the sharks into more dynamic shapes.

The internal metal scaffolding of the models were created in another program and approved by engineers, who had to consider how the 600-kilo, eight-metre-long whale shark, for example, could be safely strung up above people’s heads.

Then the sharks were 3D printed, which could take up to a month.

For the great white, the shark’s head was 3D printed in resin. A machine that Browne describes as a “robotic arm with a drill bit on the end” was programmed to carve the rest of the shark’s body from a hunk of polystyrene.

Then came sandpapering, a crust of fibreglass and layers of car paint. Eyeballs made by specialists in Los Angeles were popped into their sockets and rows of teeth, which were printed separately to the head, were painted and slotted into the shark’s gums. 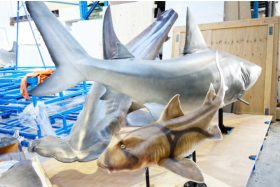 Particular attention was paid to an elaborate paint job on the “beautiful, spotted, slimline” epaulette shark – which took a week – and the grin of the gentle yet toothy grey nurse shark.

“It looks absolutely ferocious,” said Browne of the grey nurse. “It’s almost got these vampire teeth sticking out of its face. So many f—ing teeth. They were so thin and tiny. We sat there with tweezers and Super Glue just going insane for three hours, every afternoon for a week.”

When Parkinson visited the models at Browne’s studio she was “overwhelmed”.

“I may or may not have hugged several of them,” she admits. “They’re just beautiful, they really are the most amazing creatures. [The models] look so lifelike.” 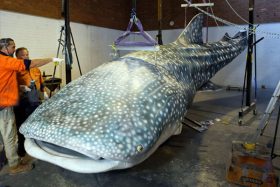 After Sydney’s first fatal shark attack in about 60 years, and amid debate surrounding the ecological effects and efficiency of shark nets, Parkinson hopes the models will encourage people to replace fear with fascination.

“For most people, when you say shark, they’re going to think of something dangerous that’s prone to attack humans. That couldn’t be further from the truth. There are so many species out there that have no interest in humans,” Parkinson said.

“They evolved a long time ago and they kind of got it right, and they haven’t changed since. Their diversity of size, structure and function is just incredible.”

See also: ‘Don’t thrash about’: Valerie Taylor on what to do if a shark attacks you