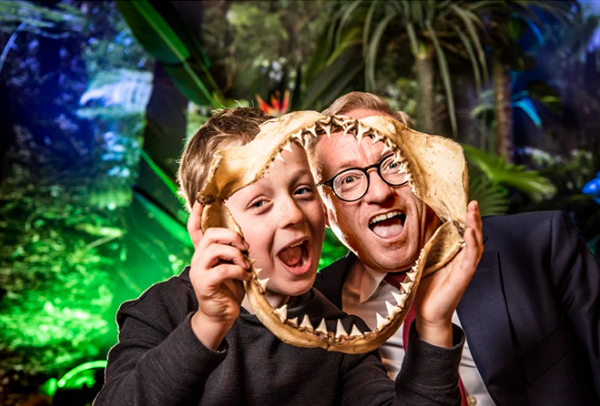 Minister for the Arts Ben Franklin (right) with Hunter Engelhardt, holding the jaws of a white shark. Credit: Steven Siewert.

A deep dive into the apex predator of the world’s oceans, via an interactive shark tank, will headline a summer of post-pandemic blockbusters planned to entice still-cautious visitors from their winter couches.

Sixteen life-sized models, including a prehistoric Helicoprion, a tiger shark, bull shark, hammerhead shark, great white, and a 14-metre-long whale shark, are now being created by a Perth model maker for the Australian Museum’s homegrown Sharks exhibition, set to open on September 24.

Arts Minister Ben Franklin said it was one of the largest and most significant glimpses into sharks that an Australian museum has ever produced.

The exhibition has been made possible by a four-year $40 million blockbuster funding agreement, which was announced in 2021 by the NSW government to assist the recovery of cultural tourism from the global pandemic.

A March survey of 2451 NSW arts attendees, part of broader national look at audience sentiment by researchers WolfBrown, found up to 40 per cent remain cautious in the aftermath of COVID-19 and that shorter-term ticket buying is more the norm.

While arts venues are seen as safer than public activities, like using public transport, audiences are still getting accustomed to living with the virus. 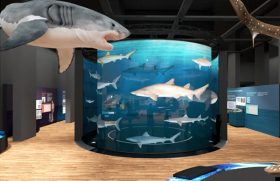 More than half of respondents said their attendance at events was inhibited by risks of transmission (52 per cent) or being a close contact (39 per cent). But uplifting content is expected to attract NSW audiences over the next year – with many eager to return to the things they love.

The blockbuster funding agreement aims to bring new international cultural attractions to Sydney’s museums and galleries and to develop homegrown blockbusters for overseas audiences, underwriting the cost of transport, promotion, installation and insurance.

At the Australian Museum, Jurassic World by Brickman will now be funded to run an extra five weeks through the school holidays until July 17.

Jurassic World has sold more than 120,000 tickets all up, with one-third of visitors coming from Western Sydney and one-sixth from the regions – proof, says the minister, along with Vivid’s big crowds, that confidence is already returning.

For Sharks, the museum’s next blockbuster, Franklin said a cylindrical theatre will be built in which 182 different shark species will swim around visitors.

The cutting-edge audio-visual and media presentations include an in-exhibit shark-tracking app in which shark activity can be monitored at your favourite beach area.

Visitors will be able to navigate through a shark body via a 3D interactive scan, and see the world in 360-degree view, through the eyes of a hammerhead shark.

Under the same funding agreement, the Art Gallery of NSW is to receive $750,000 to tour exhibitions to regional galleries.

At the Hyde Park Barracks, video artist Daniel Crooks has created a monumental tapestry of images from historic NSW sites as “never seen before”, Franklin said.

At the Powerhouse Museum, a retrospective of renowned Australian designer Carla Zampatti will open November 25, presenting the achievements of the fashion designer who died in 2021.

“It’s been a tough couple of years, and I encourage everyone to get out and enjoy themselves in everything the country’s largest arts and cultural institutions have to offer as these incredible exhibitions and events come to our shores,” Franklin said.

Attitudes and our actions would decide the fate of these ancient survivors, she said, and the Sharks exhibition was important in shaping both. After seven months in Sydney, the exhibition will tour North America with interest from two major museums “sight unseen”.

McKay is hopeful the NSW budget will approve the continuation of free admission introduced to the museum in November 2020. “In the realm we are living in now, kids need to have that interest in science and curiosity created in their lives. By removing the barrier of charging at the front door it does create that equity.”