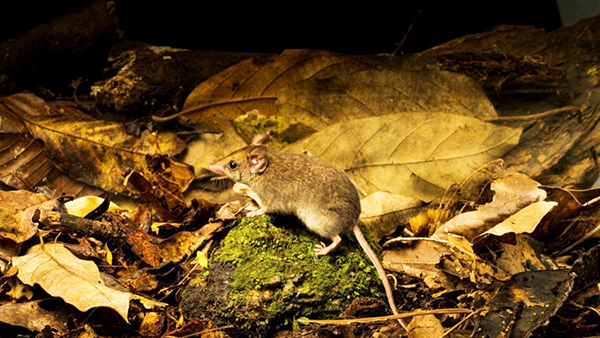 Scientists have tracked down and named a rare population of the White-footed Dunnart – a nocturnal native marsupial – in Queensland’s wet tropics.

Dr Tyrone Lavery from The Australian National University (ANU), who led the study, says what makes this so unusual is how isolated the population is.

“It’s around 1800 kilometres from the nearest population of the same species, which is really strange for a mammal,” Dr Lavery said.

“It also lives in completely different habitat in rainforests on mountain tops in north Queensland whereas the ones in Victoria and New South Wales tend to live in drier forests and heathland closer to the sea.”

This raised questions about what the elusive animal actually was. It had only ever been caught and documented three times until now, so information was scarce.

“We set off on a mission to check they were still there and to find out how they are related to other dunnarts. We wanted to confirm if it was a new species or something else,” Dr Lavery said.

“We looked at the morphology, so what it looks like, the shape of its skull, its fur colour and we compared its DNA with other dunnarts as well. It was different from its cousins in the southern states, but not different enough to be a completely different species.”

Dr Lavery said being so far away and in a completely different habitat, the newly named Wet Tropics White-footed Dunnart naturally has quite specific adaptations.

According to the researchers, given enough time it could develop into an entirely different species.

“That’s why we thought it was so important to track this group down and give it a name.”

The study has been published in Australian Mammalogy.