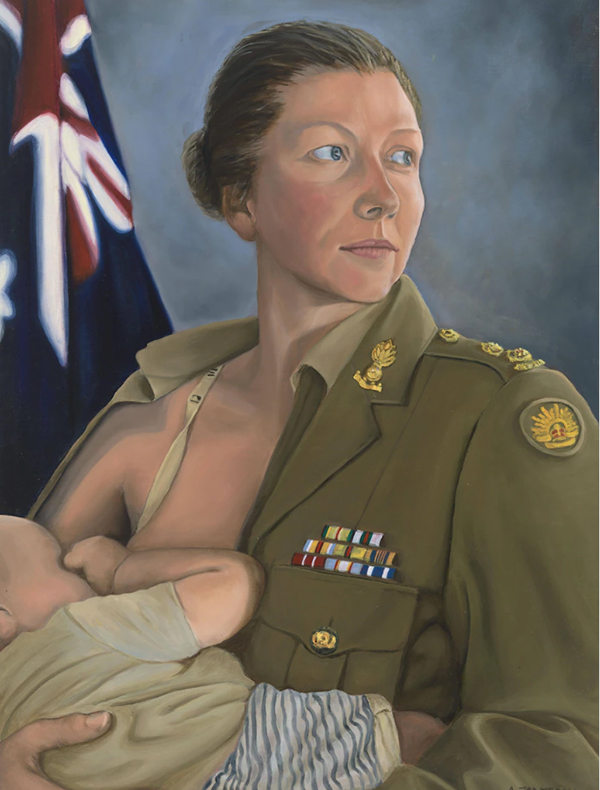 A portrait portraying the conflict between being a mother and an Army service member has won a prestigious art prize, run by the Australian War Memorial.

The Napier Waller Art Prize is open to all current and former service personnel in the Australian Defence Force, and is intended to encourage artistic excellence, promote the transformative power of creativity, and raise awareness of the experiences and talent of service personnel.

This year’s winning artwork of a servicewoman in uniform breastfeeding her child is now set to join the War Memorial’s national collection.

In her artist’s statement, Mrs Jamieson said The Promotion was an expression of her conflict between being a mother and being a service member in the Army.

“The mother in me could never make peace with the officer I wanted to be,”  she said.

“While pregnant with our first child I planned my return from maternity leave, blind to the person I would become when promoted to mother.”

“I’ve always admired the leaders I’ve served with – they give so much of themselves for their people. When our second and third children arrived, it was evident I couldn’t be both the officer I wanted to be and the mother I needed to be.”

‘I dedicate her to the mothers that serve; to their sacrifices and conflicted hearts’

Mrs Jamieson said the servicewoman in the portrait was not meant to be her, but the work had been inspired by her own experiences and the experiences of others around her.

She dedicated the portrait to all service members who are also mothers, and to their families. 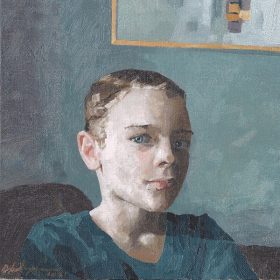 “I had incredible support from my husband and Army but it didn’t change my capacity to give of myself. Nor did watching friends manage the conflict with grace and determination. My choice was difficult but obvious and, in the end, empowering,” she said.

“But she is not me. She is the woman whose career came first. She has dedicated herself to her soldiers and her service and achieved so much. Yet now, as a new mother, she has returned from maternity leave changed in ways she never imagined; this promotion might be her greatest challenge yet.

“I dedicate her to the mothers that serve; to their sacrifices and conflicted hearts and to the families who support them.”

‘If you’re prepared to look at it from a different angle, you can only be better off’ 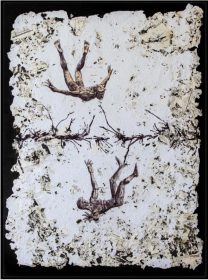 Glen Braithwaite’s submission, titled Falling Flying Driving Drowning, is ink and bleach painted on a canvas made from recycled Commando comics and a shredded slouch hat, and was one of the 14 highly commended works this year.

He said the piece, which is mounted on a 360-degree rotating bracket that allows any part of the painting to be the top, was an exploration of him “unlearning unconscious biases” surrounding post-traumatic stress disorder (PTSD) and military service.

“I’ve got some unconscious biases – now conscious biases – around PTSD and trauma because I’ve been on operations, I’ve seen things, and my perspective of those things I’ve seen was ‘okay, yeah, that was terrible’, but I didn’t take away any trauma from it, and yet a person standing next to me has trauma,” he said.

“I couldn’t understand why people had trauma, and it wasn’t until I went: ‘You know what? I need to look at it from their perspective’.

“Their perspective, their history, what they’ve grown up with, the cumulative effects of their upbringing, are all things that contribute to how they look at the world.” 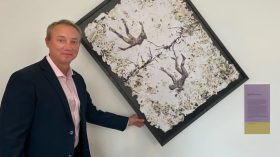 Mr Braithwaite said shredding and incorporating both his first slouch hat and Commando comics he read as a child represented his life experiences being the foundation on which he saw the world.

“I suddenly realised that I needed to incorporate my history into the canvas. I am who I am because of how I grew up and my experiences, and so that ended up being shredded and incorporated,” he said.

“That’s my acknowledgement that a person has their own experience that aren’t mine, and I needed to understand that their shredded canvas is probably quite different to my shredded canvas.”

He said he hoped anyone who saw Falling Flying Diving Drowning could see it as an invitation to consider other perspectives and begin examining unconscious biases they might have.

“However they do that, whatever the subject is, by looking at something from a different perspective it’s going to give you a better understanding, or at least an appreciation or some empathy for what it is you’re looking at,” he said.

“That’s my acknowledgement that a person has their own experience that aren’t mine, and I needed to understand that their shredded canvas is probably quite different to my shredded canvas.”

He said he hoped anyone who saw Falling Flying Diving Drowning could see it as an invitation to consider other perspectives and begin examining unconscious biases they might have.

“However they do that, whatever the subject is, by looking at something from a different perspective it’s going to give you a better understanding, or at least an appreciation or some empathy for what it is you’re looking at,” he said.

“If you’re prepared to look at it from a different angle, you can only be better off.”

This year’s shortlisted submissions ‘of an extremely high standard’ 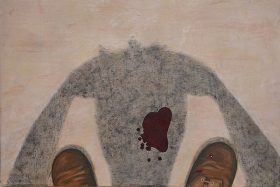 ‘Blood in my shadow’ by Jon Oliver, which was highly commended in this year’s Napier Waller Art Prize.(Supplied: Australian War Memorial).

The winning piece was selected from a shortlist of 14 highly commended entries, which will all be displayed in an exhibition in Parliament House until November 20.

The exhibit can also be viewed online, with 28 shortlisted submissions that are eligible for the People’s Choice Award.

Themes explored by the shortlisted works include mental health and trauma, the impact of moving on children and families of service personnel, and current events surrounding the Australian military.

Head of Art at the Australian War Memorial, Laura Webster, said the short-listed pieces were of a high quality and represented a variety of artistic mediums.

“This year’s short-listed works are of an extremely high standard,” she said.

“They are also quite diverse and show a broad range of artistic talent with a variety of mediums represented.

“The winning work is very significant because it tells the story of women and mothers in the Australian Defence Force.”

The prize is sponsored by The Hospital Research Foundation Group, the Department of Veterans’ Affairs and Thales Australia, and is supported by the University of Canberra.