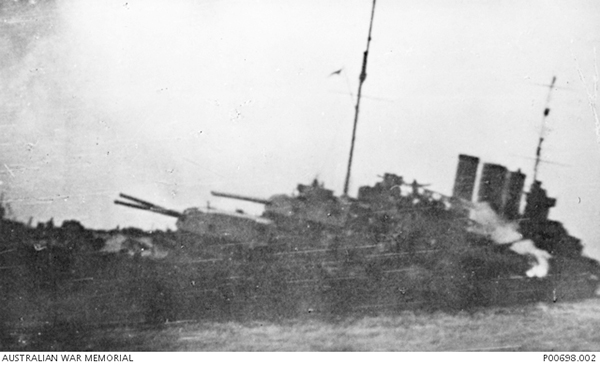 Tuesday marks the 80th anniversary of the sinking of HMAS Canberra (I). In the darkness of the early hours of 9 August 1942, the Australian heavy cruiser was sunk, having been severely damaged off Guadalcanal (Solomon Islands) in a surprise attack by a powerful Japanese naval force.

“Eighty years on from her sinking, it’s important we commemorate HMAS Canberra, the 73 crew members who lost their lives off Savo Island, the 11 who initially survived but would later die as a result of the attack, and those who survived to return home,” Australian War Memorial Director Matt Anderson said.

Tuesday’s Last Post Ceremony, held at the Australian War Memorial, will commemorate the 80th anniversary of the sinking of HMAS Canberra and tell the story of Electrical Artificer 1st Class Ernest Harrison, who was killed in action aboard Canberra.

Ernest Harrison’s name is listed on the Roll of Honour at the Australian War Memorial, alongside 83 of his fellow shipmates who also died as a result of the Battle of Savo Island.

“As long as we remember those who died in the service of our country, and in the defence of our freedoms, they did not die in vain. It’s important for the families of those who lost their lives on HMAS Canberra 80 years ago today, especially for the family and loved ones of Ernest Harrison and, that we pause to commemorate this action and to keep their memories alive,” Mr Anderson said.

HMAS Canberra was one of two 10,000-ton County Class heavy cruisers ordered by the Australian government in 1924. The cruiser was commissioned on 9 July 1928 and spent much of her career carrying out escort and patrol duties.

In June 1942 Canberra joined Taskforce 44, a group of warships from the US Navy and the Royal Australian Navy. In the early hours of 9 August, Canberra was patrolling between Savo Island and the northwestern tip of Guadalcanal, in company with US Navy ships, when flares suddenly lit up the darkness.

Canberra was seconds away from opening fire, once an aiming point could be established in the dark, when she was hit with a torrent of shellfire from the Japanese.

Within moments of the enemy opening fire, the Australian cruiser abruptly lost all power, leaving her unable to fire even one shot in her own defence. As the lead ship, Canberra received the full force of the Japanese barrage and was hit 24 times in less than two minutes. Canberra was eventually ordered to be abandoned and sunk if she could not steam by 6.30am. Once all the survivors had been evacuated, USS Selfridge fired 263 5-inch shells and four torpedoes into Canberra, although even then she refused to sink. Eventually a torpedo fired by USS Ellet administered the final blow. Canberra sank at about 8am on 9 August 1942 in an action that became known as the Battle of Savo Island.