You are here: Home » Articles filed under: 'News' » Article: 'AWM ‘Ink in the Lines’ touring exhibition' 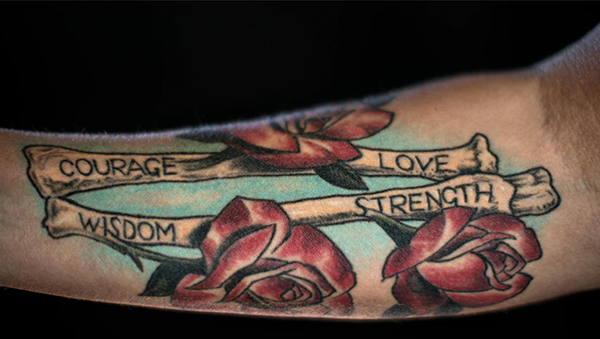 Stories of service and sacrifice are inked on the skin of current and former military personnel across Australia.

The Australian War Memorial has created a photographic chronicle of the connection between tattoos and the Defence Force, with the results on display in a powerful exhibition.

“Tattoos have been such a central part of people’s lives but have never been talked about,” senior curator Stephanie Boyle said.

“It’s an unofficial history hiding within the official military history.” 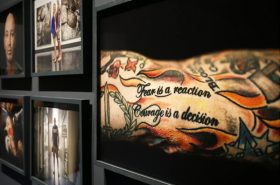 The exhibition is being held at the Museum of Tropical Queensland in Townsville.(ABC North Qld: Lily Nothling).

The Ink in the Lines exhibition took about three years to curate and is on tour around the country.

It features the stories and tattoos of 22 people from across Australia, including Townsville veteran and tattoo artist Rob Douma.

“A lot of the tattoos that I’ve done for the veterans have been about helping them process grief, trauma, loss of mates,” Mr Douma said.

“For others … it’s all about that identity and belonging.” 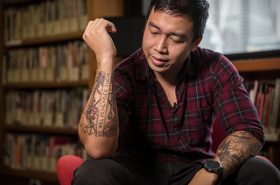 Newton got this forearm tattoo in his first year as a military engineer to affirm his identity as a soldier and pay tribute to the Army’s history.(Supplied: Australian War Memorial).

Despite more Australians being inked than ever, Mr Douma said there was still stigma around tattoos.

“I’ve travelled to other parts of Australia where I get stared at because I’m heavily tattooed,” he said.

“There are still people of every generation that look at me like, ‘What is that guy? Is he a bikie? Is he a criminal?'” 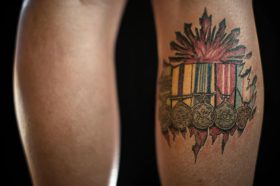 The medals on this soldier’s calf are a reminder that her service days are behind her.(Supplied: Australian War Memorial).

Ms Boyle said some people were surprised to find out about the War Memorial’s exhibition.

“A lot of people disapprove of tattoos … [but] once they had listened to the stories and saw the photographs and understood the background of why someone – especially an ADF veteran – might choose to get a tattoo, their mind was completely changed,” Ms Boyle said. 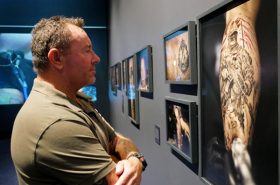 Brian Grace said he was overwhelmed to see his tattoos and story showcased at his home in Townsville.(ABC North Qld: Lily Nothling).

Brian Grace said he was overwhelmed and honoured to see photographs of his tattoos hanging in the Museum of Tropical Queensland in Townsville, Australia’s largest garrison city.

“There is a lot of personal stress and a lot of suicide in the defence force, and a lot of these blokes [featured in the show] say their tattoos have stopped him from going down that line,” he said.

“There were 18 fatalities from that and a number of the blokes from units that I’d served in were involved,” he said. 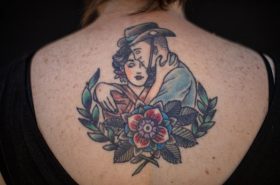 This woman’s tattoo was intended to represent the experience of military spouses.(Supplied: Australian War Memorial).

“We’ve got one person in the exhibition who’s not a veteran — but she’s married to one and she was so thankful for the safe return of her husband from Afghanistan that she wanted to embody that by getting a tattoo,” Ms Boyle said.

“She said that it’s not just for her, it represents all the families who worry and wait for their loved one to come home.”

Ink in the Lines is on show at the Museum of Tropical Queensland until October.