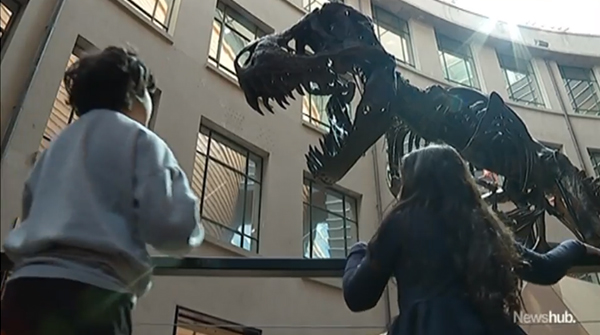 Prehistoric creatures are on the loose in Auckland’s War Memorial Museum with visitors unknowingly walking amidst them.

Eager dinosaur hunters can only find them with their phones by using new augmented reality technology.

‘You can feel dwarfed by them’: Full-scale sea monsters on display in new Auckland Museum exhibition

Armed with nothing but cell phones, fearless tamariki are hunting down some of the most ferocious predators to ever walk the Earth.

Roaming the museum are prehistoric creatures that can only be seen through augmented reality.

To become a dinosaur hunter all you need is a smart device.

“You can scan the QR codes around the museum and turn around to a space which is shown in a photograph and the model will just pop up,” Auckland Museum digital experience producer Rachel Welton said.

“We wanted people to have a new way to look at dinosaurs and explore a little bit more about the different dinosaurs, some of which we have in the museum as well,” Welton said.

When one is found you can get up close and personal and have your photo or video taken with them, only if fear isn’t a factor.

“You can learn a lot more about your favorite dinosaurs in here. There are six of them around the museum and there is a bit of information in every model that tells you a little bit more about it,” Welton said.

But if you want to see the real deal there’s Peter, one of the most completed T-rex skeletons in the world, also on display at Auckland Museum.

“It just adds some reality to it rather than just watching movies and reading books,” one person told Newshub.

“We’ve come up specially to look at this. It’s awesome, so impressive,” a second person said.

Impressing all ages, in the flesh and through the use of technology.

See also: Something big is here T. REX IS KING