You are here: Home » Articles filed under: 'News' » Article: 'AWM’s art colln as another way of describing'

AWM’s art colln as another way of describing

July 1st, 2022 | Browse other: News. | Tagged with: australian war memorial, The Australian War Memorial's art collection is another way to describe war and its aftermath | 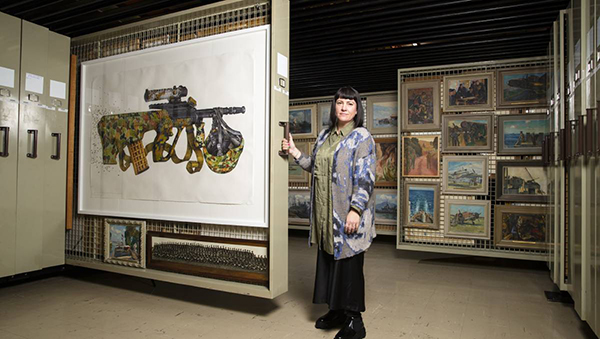 Sally Pryor, The Australian War Memorial’s art collection is another way to describe war and its aftermath, The Canberra Times, 23 June 2022

When Charles Bean first conceived of an Australian war memorial, he wanted it to be more than just a shrine of remembrance.

It would be a museum, a monument, a temple, and a place to help people understand the effects and the legacy of war.

To do that, the Australian War Memorial would need art, and lots of it.

The Official War Art scheme came into being in 1917, long before the memorial itself opened in 1941, and is now the longest running art commissioning program in Australia.

Over the years, the memorial has sent artists into conflict zones all around the world, to bear witness and interpret what they see, including both World Wars, and the Middle East, Korea, Vietnam and the Solomon Islands.

Today, the memorial’s vast art collection spans more than 100 years and some 40,000 works, including by some of the country’s biggest names, like Arthur Streeton, Sidney Nolan and Stella Bowen.

The head of the collection, Laura Webster, said many people were surprised to discover the memorial held more than just war paraphernalia in its collection, and that often artworks were the most potent way to communicate the horrors and aftermath of war.

“Artists are always quite often at the forefront of talking about difficult and interesting subject matter,” she said.

“I think the memorial’s collection very much does represent that, especially more recently.”

The collection has evolved over time, not just as a result of the official war artist scheme, but also through a process of acquiring and commissioning works to expand and complete what’s already there.

“If something pops up and we don’t have a broad representation of the topic that it’s representing, and if it happens to be a very important artist and artwork itself, that adds to it,” she said.

And the collection is not only populated with works by professional artists.

Begun in 2018, the prize is named after Australian artist Mervyn Napier Waller, who fought and was wounded in France in 1917 and later created the mosaics and stained glass windows in the memorial’s Hall of Memory.

The prize winner will be announced on Thursday.

One of this year’s judges is renowned artist eX de Medici, who the memorial commissioned to observe peacekeeping activities in the Solomon Islands in 2009.

She said the prize – which this year received 116 entries across various mediums – was a potent insight into the effects of modern-day conflict.

“The overwhelming thing that I’ve found as a judge for three of these prizes is the disturbance that is reflected in the work,” she said.

“I think we’re constantly reminded of the damage these people suffer from these horrendous things that they’re forced to do.”
Napier Waller Prize finalists are on display at Parliament House until November 20.
Positions Vacant » View All
» Te Papa Foundation Relationship Manager – Te Papa
» Development Manager, Bequests & Friends – NMA
Latest News » View All
1/4 Australians lack of knowledge of Holocaust
Gandel Holocaust Knowledge & Awareness Survey Read more.
NMA first major redesign is a triumph
Finally, bold and imaginative Read more.
NMA hosts Asia TOPA
Asia-Pacific Triennial of Performing Arts Read more.
Te Papa’s Hiahia Whenua, Landscape & Desire
- historical & new landscape perspectives Read more.
Te Papa lets Sir Charles’ cicadas sing again
& 15MYO cicadas in AM/ UNSW research collab Read more.
Top +
Council of Australasian Museum Directors c/o Mr Brian Oldman, South Australian Museum PO Box 234 Adelaide, South Australia 5001 Australia, © CAMD 2022
Copyright: All information and resources provided on this website remain the copyright of the Council of Australasian Museum Directors. Permission is granted for viewing and downloading for personal and not for profit purposes. Those wishing to reproduce any materials for commercial, educational or other uses are requested to contact us.
Disclaimer: The content of this website is provided for information purposes only and is not intended as a substitute for professional advice. No claim is made as to the accuracy or authenticity of the content of the website. The Council of Australasian Museum Directors does not accept any liability to any person for the information or advice (or the use of such information or advice) which is provided on this website. The information on our website is provided on the basis that all persons accessing the site undertake responsibility for assessing the relevance and accuracy of its content. No responsibility is taken for any information or services which may appear on any linked web sites. Hostgator.
.