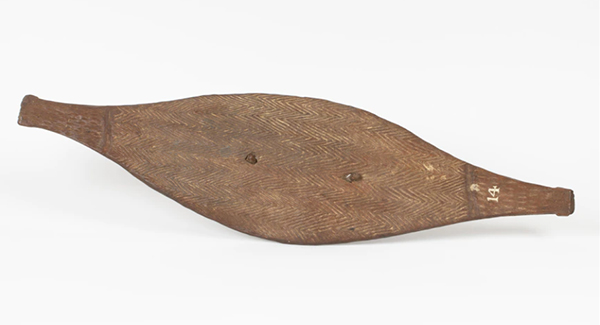 A broad shield, taken from the Kaurna people and held in the Burke Museum for almost 150 years. (Supplied: Burke Museum).

In 1878, the Burke Museum in the north-east Victorian town of Beechworth sent a collection of Aboriginal artefacts to the Paris World Expo.

Among them were 15 objects that had been taken from the Kaurna people, in what is now called Adelaide, and sold to the museum.

Until very recently, the Kaurna people thought the items had been lost after their journey overseas.

In fact, they returned to Beechworth and have been sitting in the Burke Museum ever since, almost 900km from where they belong.

But now these items are set to be returned, as part of the Burke Museum’s thorough repatriation program. 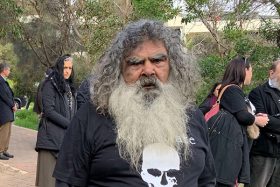 “Getting them back, I’ve never had the words to explain it. But inside there’s a great relief,” Mr Newchurch said.

“It’s a long time coming, but we’re preparing to bring this collection home.”

About 20 years ago, during a bad bushfire season, many items in the Burke Museum’s collection were taken down and put into storage for safekeeping.

Among them were the Kaurna artefacts, including tools, weapons and shields.

During that process, research was done about where the items had come from, and questions started to be asked about whether they should be returned to their rightful owners.

Burke Museum manager Cameron Auty said it was part of an ongoing conversation that was happening all across the museum industry.

“There’s been a change in the sector around who should own artefacts, the ownership of culture and how important that is.”

Mr Auty said many museums were returning ancestral remains and sacred objects, but they were one of the first museums to actively try to return the more everyday items.

“It’s quite a significant collection, the one that we hold, and returning them to their traditional owners is a really important thing for the museum to do,” he said. 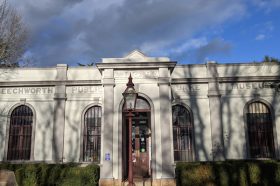 The Burke Museum in Beechworth is determined to return Aboriginal artefacts to their rightful owners.(ABC News: Katherine Smyrk).

For Mr Newchurch, it’s important people realise how significant all these items are – whether they’re the remains of his ancestors that had been held by the South Australian Museum until recently, or the broad shield in the Burke Museum.

“It’s about getting people to recognise they’re not human remains or bones, as people describe them, they’re people,” he said.

“And these artefacts [from Burke Museum], they’re the tools, the implementation of daily living.”

He said having items like these back in their rightful place was vital.

“This bears well for our younger generation into the future, but it also bears well for that education, sharing that knowledge, and the utilisation of this collection that’s been held away and denied too long from us.”

The reverse side of the broad shield, set to be returned to the Kaurna people.(Supplied: Burke Museum).

The Burke Museum had meticulous records kept by the amateur anthropologist who took the items and sold them on more than a century ago.

This made it much simpler to determine to whom these items need to be returned.

A few years ago, they returned a number of significant artefacts to the Dja Dja Wurrung community, in central Victoria.

“So much Indigenous cultural material was taken and dislocated and sent overseas or destroyed or given to the wrong people over the last 150 years, and it’s rare, these moments, where something can actually go home,” Mr Auty said.

“We profited and benefited for over a century by holding these artefacts, and there’s some small level of reconciliation benefit that can be gained by us working towards returning them.”

Dja Dja Wurrung message sticks that were gifted to the Burke Museum in 2018 after a number of artefacts were returned.(Supplied: Burke Museum).

Mr Newchurch said his work on repatriation had been an important part of his healing journey, and the return of these artefacts would help with that.

“I used to be one of those angry people, where you just scream and rant and the loss of energy and the hurt just gets deeper and you never get healed,” he said.

“But this enables us to deal with that grief, that trauma that always taunts us as Aboriginal people.”

He paid homage to elder Uncle Joe Mitchell, who he said taught him a lot about the healing process.

“We used to cry tears that run inside,” he said.

“It’s been a long journey, but it enables you to have that cry outwards, and you’re not ashamed of it. That’s the beauty of it.”

Mr Auty is hoping the work of the Burke Museum will inspire others to take the step.

“Often it’s a very daunting thing. A lot of museums have these collections and think, ‘I don’t know what to do about it’,” he said.

“It’s a learning process for everybody, and if we’re a step ahead of some other museums then we’re happy to help them out.”

“It’s a process, and we know it’s going to have that mushrooming effect on the whole of society,” he said.

“It’s these opportune moments that are going to be built together, with non-Aboriginal people, with the private sector and with the governments.

“We open up the door because we need you to walk with us.”