August 5th, 2022 | Browse other: News. | Tagged with: Birmingham’s museum sector contends with the legacy of colonialism | 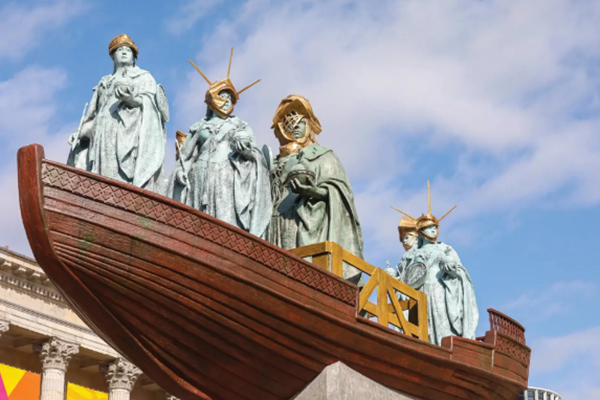 Tom Seymour, As the Commonwealth Games open, Birmingham’s museum sector contends with the legacy of colonialism, The Art Newspaper, 30 July 2022

The Birmingham Museum and Art Gallery is pursuing a project of mass participation in an attempt to fully involve the city’s many communities in the future of the museum.

“And now I’m going to do something the British government doesn’t always do—and welcome some foreigners,” said Joe Lycett. The Birmingham-born comedian was on stage at the opening ceremony of the 2022 Commonwealth Games, which launched in Britain’s second city last night (28 July) and continues until 8 August.

Lycett was welcoming to the UK the athletes of the 72 nations and territories that, at some point, were colonised by the British empire. The joke went viral, capturing the tension of a joyous sporting event that, at its essential heart, is a celebration of a chapter of British history which many in the art world and beyond feel to be unreconciled and problematic, even as it continues to exert a significant hold over the structural workings of modern British life.  This is strikingly apparent in the responses of Birmingham’s artistic community and cultural sector as they work out how to contextualise the Commonwealth in the midst of Britain’s ongoing reckoning with colonial legacies.

This is perhaps most apparent in Victoria Square, at the very heart of Birmingham’s centre, where the artist Hew Locke, on commission by the nearby Ikon Gallery, has dramatically reconfigured a historic statue of Queen Victoria, the monarch who oversaw Britain’s often-violent “discovery” of the world beyond our borders. The work, Locke told The Art Newspaper in an interview in June, is inspired by his “confused and complex” feelings toward the impact of the British empire.

Locke, who grew up in the former British colony of Guyana and passed a sculpture of Queen Victoria every day on his way to school, has formed a small, rickety rowing boat around the statue of the former queen. It gives the impression the queen is at sea on a dangerous journey with no clear destination. The work seems to echo the experience of migration that many ancestors of the citizens of Birmingham at some point experienced, often as a direct result of the British empire. 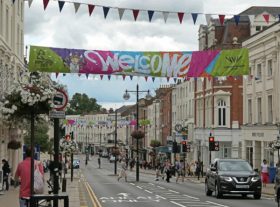 A banner in Birmingham welcoming visitors to the city for the 2022 Commonwealth Games
Photo by Amanda Slater, via Flickr.

Locke’s reinterpretation of the British monarchy forms the entrypoint for visitors to the Birmingham Museum and Art Gallery, a civic museum that, for much of its recent life, has had a reputation for being rather staid and traditional—but is now under new leadership and going through a dramatic reconfiguration.

The Birmingham Museum and Art Gallery, under the joint leadership of Zak Mensah and Sara Wajid, and with the aid of director of collections Toby Watley, is pioneering a new “mass participation” model that, Mensah says in an interview, is unparalleled for any other major museum in the UK.

“Museums are changing, and we’re determined to lead in that,” Mensah says. “We have to stay relevant. Otherwise we’re facing a slow death.”

Mensah envisions a new model of museum stewardship in which the institution becomes a responsive and reflective expression of the local communities that comprise one of the most diverse and multicultural cities in the UK.

“We are trying to forge a new path for this museum, one that’s orientated around an idea of mass participation, something we believe to be a really genuinely inclusive practice,” he says. “It’s being done in other places in pockets, but it hasn’t been done, as far as we’re aware, at this scale.”

The effects of this approach are felt as soon as one enters the museum. The museum, for many years, was known in cultural circles for its large collection of pre-Raphaelite paintings, as well as the permanent exhibition of the Staffordshire Hoard, the 4,600 gold fragments which remains the largest collection of Anglo-Saxon gold ever found, first discovered in 2009.

Today, visitors to the museum are greeted with rather different types of art and heritage: contemporary photography, conceptual artworks and readymade sculptures. Further in, temporary exhibitions recall Birmingham’s recent rave culture, as well as the coalitions of minorities that had to contend with Neo-Nazism on the streets of Birmingham and other cities across the UK in the 1970s and 80s.

Mensah and Wajid assumed directorship of the museum in November 2020, at the height of the Covid-19 pandemic. Lockdown and the forced closure of the museum provided them with a rare chance for a reset. “The pandemic gave us an opportunity to strip everything out, lay it out there and start again,” Mensah says. “It was a traumatic time for many of us, but we realised, for the museum, it was a once-in-a-century opportunity.” 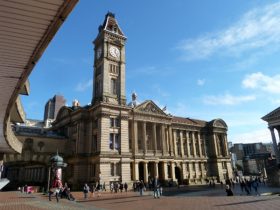 The Birmingham Museum and Art Gallery. Photo by Jimmy Guano, via Wikimedia Commons.

The pandemic, and the social impact of events like the murder of George Floyd in Minneapolis, have brought about “a moment of change for the cultural sectors a whole”, Watley says. “People understand and are receptive to that. And so, indirectly and directly, the feedback we’re getting is: ‘No, this is great, we want this, keep going.’”

Mensah appreciates that the mere act of entering a museum is intimidating for many people, especially those who don’t expect to find their lives and faces reflected there. “That was my experience as a kid,” he says. “I was always scared to go into museums.”

To change this, Mensah envisages a museum that acts like a facilitator for the cultural events happening in the community, on the street and far outside of the gallery’s walls, whatever they may be. He recalls, during the pandemic, the domino effect of museums around the UK publishing inclusivity and diversity statements in response to the Black Lives Matter movement. “Statements are great. And intent is great. But ultimately, you’ve got to then show proof of change,” he says.

Watley adds: “The old rules for what a museum should be have gone out of the window.”

For Mensah, who has family and ancestry in New Zealand and Ghana, there is a personal element to this work. “There are very few people of colour working in cultural organisations, let alone running them,” he says. “There’s definitely not enough.”

But his own background is not the issue here, Mensah says. Instead, he envisages a process of learning to be guided by the people of Birmingham—a basic inversion of the idea of a museum knowing best and bestowing its judgement on the city’s populace. “I know I can’t speak on behalf of other communities that aren’t my own, because I’m not in those communities,” Mensah says. “So we have to welcome them in and make them feel they can be a true part of this. That requires a lot of trust on both sides.”

Mensah has no illusions about the challenges that lie ahead. “Mass participation is hard,” he says. “Leading the organisation in this way is scary. But I think it’s about getting used to being uncomfortable. We’re looking to be led by others, whichever way they take us.”

Athletes from around the world will be putting their careers on the line over the next two weeks in Birmingham. Mensah likens his stewardship of Birmingham’s biggest cultural institution to their experience.

“We’re going to run as hard as we can, we’re going to jump and we have to hope we land in the sandbox,” he says. “We don’t know whether we will land it, but we have to try.”