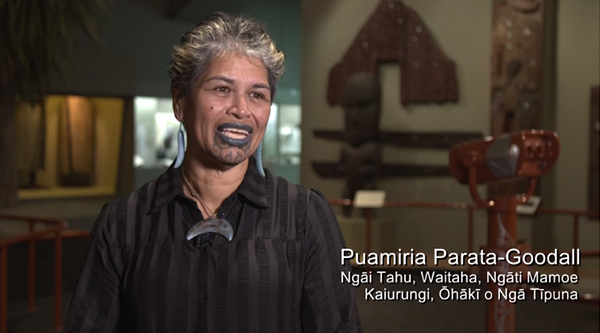 Ten mannequins from dioramas depicting early Māori life in Te Waipounamu (the South Island) have been removed by Canterbury Museum. Click here to view the video.

Canterbury Museum has removed “offensive and inaccurate” Māori mannequins from its dioramas, more than two years after complaints were first made.

Canterbury Museum director Anthony Wright said people had told the museum the mannequins were the most offensive part of the dioramas.

For over two years, the dioramas have been partially covered with a message apologising for any offence that may have been caused. The dioramas were developed in the 1980s and based on earlier archaeological research.

A former museum board member previously claimed he asked for the exhibits to be removed in 2005, while earlier this year, race relations commissioner Meng Foon called for urgent action to rectify them. 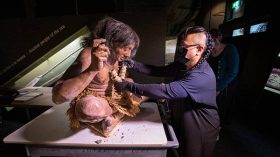 The museum’s associate curator for Māori and Pasifika ,Hatesa Seumanutafa (pictured), says there are several inaccuracies with the way the mannequins are depicted, including their hair, facial features, nudity, and stances. Canterbury Museum/supplied.

Mana whenua and museum staff held a ceremony to mark the removal.

Hatesa Seumanutafa, the museum’s associate curator for Māori and Pasifika, said the mannequins needed to be removed because they were not created for Māori, or by Māori.

“Their state of nudity is inaccurate, the way their hair is placed, their facial features, there’s a lot that is wrong with how they’ve been represented, their stances even,” she said.

Puamiria Parata-Goodall, a museum board member who represents Te Rūnanga o Ngāi Tahu, said it was emotional having the mannequins removed because they had been there for a long time. 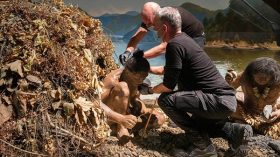 “This was part of our healing to have this opportunity to remove the mannequins and to start to rebalance that narrative from an iwi perspective,” she said.

She said the relationship boded well for the future.

Museum chair David Ayers said the museum had listened to mana whenua and the wider community. 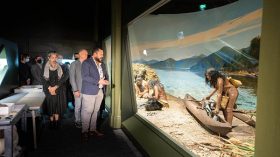 The dioramas were developed in the 1980s and based on earlier archaeological research. Canterbury Museum/supplied.

Their overwhelming message was the “offensive and inaccurate depiction” no longer had a place in the museum, Ayers said.

Wright, the museum director, said the rest of the dioramas would be dismantled later this year as the museum prepares to move out for a major redevelopment.

It had planned a major $195 million redevelopment, which would see the museum closed for about five years, though costs have skyrocketed.

The project budget is now $205m, but that will not cover all escalation. The board has said it is looking at other options to get back within their budget.