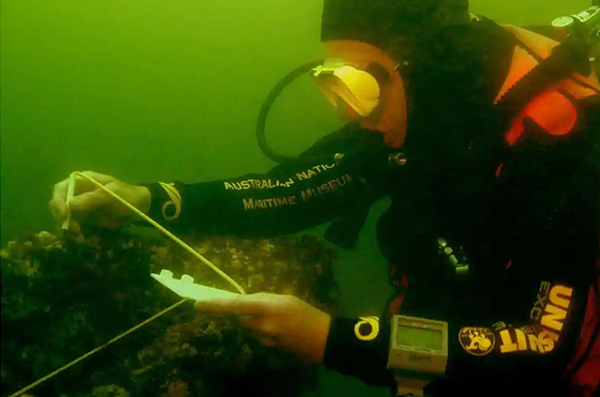 Experts say marine animals such as fish and lobsters pose a threat to the Endeavour shipwreck, but humans can stop the damage. Photograph: Australian National Maritime Museum/AFP/Getty Images.

Fish and crustaceans eating wreck to prey on shipworms and snails while storms could expose more wood to damage.

The wreck of Captain James Cook’s Endeavour is under threat not just from shipworms, but also from fish, crustaceans and the ocean itself, maritime archaeologists warn.

The wooden ship rests off the coast of Rhode Island in the US, and is already worm-eaten. Experts from the Australian National Maritime Museum say time is critical in the race to save parts of the wreck that are important both historically and for future study.

In February, the museum announced the identity of the wreck at the site known as RI 2394. That announcement caused a stoush with the Rhode Island custodians, who said it was premature. However, the museum says it has the evidence it needs and wanted to use the declaration to push for the site’s protection.

Reuben Shipway, a University of Plymouth marine biology lecturer, has dived the site. He found Teredo navalis – worm-like molluscs known as shipworms or the “termites of the ocean” – riddling the wood, along with boring crustaceans called gribbles.

Australians have no power to directly intervene, but hope the Americans will take measures to preserve what’s left. The museum has discussed site protection with the Rhode Island Marine Archaeology Project (Rimap), and has warned that it needs “active management”. The museum has also raised it with the local Rhode Island heritage authorities.

After the report that the exposed wood was already riddled with shipworms and gribbles, experts now say fish, lobsters and other marine animals are eating the wood to try to get at the worms inside. Meanwhile, a storm could shift the sand on the ocean floor, exposing more wood to animals and the elements.

Dr James Hunter, the museum’s curator of naval heritage and archaeology, said many people think about looters when they hear about the need to protect shipwreck sites.

“That’s an immediate concern and one that’s legitimate, but the natural processes can get overlooked,” he said.

“You have issues with shipworm and with gribbles [and] fish; I’ve watched fish chew on timber.

“They feed on just about anything, and what they’re trying to get out is worms and snails and whatever happens to be in the wood.”

Kieran Hosty, the museum’s maritime archaeology manager, said the threats were “nothing new” and that wrecks had “no chance” if timber was above the sea bed and in temperate waters.

“We have encountered shipworms before on all the timber sites in Rhode Island,” he said.

“If the Endeavour is left exposed, there’s a continued threat to the site.”

While there’s a chance storms could expose more of the wreck, he said, it was also possible they could return to the site and find it entirely buried and therefore protected.

But there are also ways humans can stop the damage.

Hunter said any parts that were buried were “deoxygenated”, so nothing could get at them. It’s also possible to use a “geotextile” – similar to a shade cloth – to keep the worms out.

Hosty said the easiest and cheapest way is sandbagging the site, using sand from the local environment.

“[Or] you can have sand pumped on to the site. In more extreme circumstances, you can use artificial seaweed – basically a [neoprene] seaweed frond on a mesh base – which attracts sand as it goes past,” he said.

“We’ve used all these techniques successfully.”

Cook sailed the Endeavour through the South Pacific and to New Zealand and Australia, where he claimed the eastern coast for Great Britain in 1770, calling it New South Wales.

During the American war of independence, the ship, by then known as Lord Sandwich, was scuttled.

After the museum declared earlier this year that the wreck was the Endeavour, Rimap’s head, Dr Kathy Abbass, blamed “Australian emotions or politics” for the “premature” announcement.

Abass declined an interview but said the reports of damage would be included in a Rimap report due to be published shortly.

“You will see an interpretation of Dr Shipway’s results as part of Rimap’s archaeological study,” she said.