You are here: Home » Articles filed under: 'News' » Article: 'Daniel Weiss, The Met’s Pres to step down'

Daniel Weiss, The Met’s Pres to step down 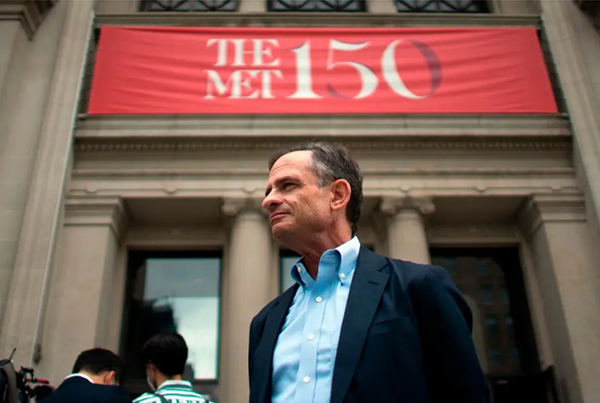 Daniel H. Weiss, president and chief executive of the Metropolitan Museum of Art, at the reopening in August 2020 after a pandemic shutdown. Credit: Kena Betancur/Agence France-Presse — Getty Images.

He came aboard in 2015 to stabilize a troubled Metropolitan Museum of Art, led the museum after one director was ousted and then shared power with another. But on Tuesday, Daniel H. Weiss told the museum’s board that he would step down as president and chief executive in June 2023.

“The institution is in a strong and positive place — I’m proud of the work that we’ve done,” Weiss, 65, said in an interview. “I think it’s always best to know what the right moment is. I’m ready to do something else.”

Weiss, the former president of Haverford College and an art historian, said he was unsure what his next chapter would be, though he looks forward to returning to more writing and perhaps some teaching. The board will now evaluate whether to replace Weiss or to abandon its two-pronged leadership structure, which is unusual for art museums and was put in place in 2017.

The model appeared to serve the Met well, with Weiss, as president, serving as the business and administrative leader, while its directors — Thomas P. Campbell, who resigned under pressure in 2017, and Max Hollein, who was appointed in 2018 — provided the curatorial vision and programmatic ideas.

Under Weiss’s guidance, the Met balanced its $310 million budget; turned the Breuer building on Madison Avenue over to the Frick; and moved forward on its delayed Modern Wing, with the help of a $125 million gift from Oscar Tang, a Met trustee, and his wife, Agnes Hsu-Tang.

“Dan brought maturity and empathy to the museum and really stilled troubled waters,” said Hamilton E. James, the Met’s co-chairman. “He got us to financial stability and navigated the place through all these weird curveballs you wouldn’t ordinarily expect.”

Weiss also guided the museum’s decision to change its 50-year admissions policy, requiring out-of-state visitors to pay a mandatory admission fee of $25. Weiss has helped steer the museum through the pandemic, difficult discussions around race and the controversy over Sackler donations.

When Met staff members in 2020 urged the museum’s leadership to acknowledge a “culture of systemic racism at our institution,” the Met subsequently enacted 13 Commitments on Anti-Racism and Diversity, hired its first chief diversity officer and raised funds to underwrite paid Met internships.

But his departure inevitably raised the question of whether he was the loser in the power-sharing arrangement. Having started as president and chief operating officer in 2015, Weiss in 2017 added chief executive to his title in a striking leadership reorganization, which meant that the museum’s next director would report to Weiss, rather than the other way around.

That next director was Hollein, who was long accustomed to being the person in charge, having served as a museum director since age 31. His résumé included 15 years at several institutions in Frankfurt and two years as director and chief executive of the Fine Arts Museums of San Francisco.

In San Francisco, Hollein managed to take the reins, despite the museums’ powerful board president, Diane B. Wilsey, known as Dede, who had a reputation for being loath to relinquish control.

Weiss, too, was used to running the show at Haverford College and, before that, as president at Lafayette College, where he also taught art history, and as dean of the Krieger School of Arts and Sciences at Johns Hopkins.

In addition, by the time Hollein was hired at the Met, Weiss had had a tantalizing taste of being boss, running the museum after Campbell resigned as director under pressure in 2017.

But both Weiss and Hollein said that, despite their admittedly different management styles and occasional disagreements, they had enjoyed a constructive working relationship.

“I have a real belief in shared governance,” Weiss said. “Max and I are very different people, but we work really well together as partners. That’s why the museum has been thriving.”

Hollein said in a statement: “Dan has led the Museum through unprecedented times. He has been an extraordinary partner, whose wisdom and judgment have set an example for us all.”

Among the major infrastructure projects completed during Weiss’s tenure are the $150 million replacement of skylights over the European Paintings Galleries, a reimagining of the British Galleries and the renovation of the Musical Instruments Galleries.

In addition, the Met recently introduced the reconstruction of the Michael C. Rockefeller Wing (which houses collections of art from sub-Saharan Africa, Oceania and the ancient Americas). The museum is also renovating the Ancient Near East and Cypriot galleries.

Weiss has continued to keep his hand in writing. Next fall, Yale University Press will publish his book “Why the Museum Matters,” which examines the role of art museums in our culture. In 2019, while serving as Met chief, he published a biography of a Vietnam War helicopter pilot, and poet who died in the war (it is soon due out in paperback). 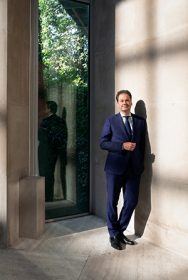 Max Hollein was appointed director of the Metropolitan Museum of Art in April 2018. Since then he assumed the artistic leadership and won support from the staff with a more inclusive exhibition program, and collection.Credit…Lelanie Foster for The New York Times.

Among the challenges facing the Met are the realization of its new Modern wing as well as who will oversee that important branch of the museum: Last month, the Met’s top curator of modern and contemporary art, Sheena Wagstaff, announced that she would leave this summer.

The dual partnership at the Met also extended to the board of directors in November 2020, when James and Candace K. Beinecke were appointed to replace Daniel Brodsky, the first time the board had two leaders.

Asked if the museum would continue Weiss and Hollein’s shared structure, James said, “We’re about to start on that — thinking about the right leadership structure, should there be a president and if so what is the definition of that role.” He added that the board would consult Weiss and Hollein about their experiences in addition to seeking input from staff members and trustees.

The museum has experimented with management configurations over the years. Its long-serving director Philippe de Montebello started out in 1977 reporting to the president, William Macomber, and later became coequal with William H. Luers, who became president of the museum in 1986 after a career in the U.S. Foreign Service. When Luers retired in 1999, the board added chief executive to de Montebello’s title, and the museum’s next president, David McKinney, reported to him, as did McKinney’s successor, Emily K. Rafferty, in 2005.

Facing a projected deficit of $40 million and low staff morale after Campbell’s departure, the Met looked to Weiss as something of a calming parent who would draw on his background as a capable manager. In addition to having led academic institutions, Weiss had an M.B.A. from the Yale School of Management and early in his career spent four years as a management consultant at Booz Allen Hamilton.

Despite his lack of museum experience, Weiss warmed to the role of arts leader in the wake of Campbell’s departure — meeting with curators about upcoming shows, and becoming the public face of the Met.

When Hollein was hired, Weiss’s role became more clearly defined as the less-sexy operations side. The new director assumed the artistic leadership and quickly eclipsed Weiss with strong moves toward a more inclusive exhibition program, collection and staff.

Hollein has also leaned into the contemporary art world, building on his European connections and lessons learned early in his career at the knee of Thomas Krens, the former Guggenheim director who made that New York institution a global powerhouse by expanding its reach in Bilbao, Spain, while stirring the pot by mounting shows of Giorgio Armani suits and Harley Davidson motorcycles. Hollein during his career has curated numerous influential shows of living artists, like Jeff Koons and Julian Schnabel.

An elegant figure with a Germanic accent, Hollein has also become a regular presence in the swirl, comfortably clinking glasses with power players at art fairs, biennales and gallery openings.

Weiss, in contrast, has a quieter, college professor aura, though by all accounts he has been no less ambitious or opinionated.

But Weiss insisted that his decision to leave was unrelated to any tensions or rivalry with Hollein. “We have a great deal of respect for each other,” Weiss said. “There is no issue between Max and me at all.”