You are here: Home » Articles filed under: 'News' » Article: 'Daryl Karp AM takes up Dir, ANMM' 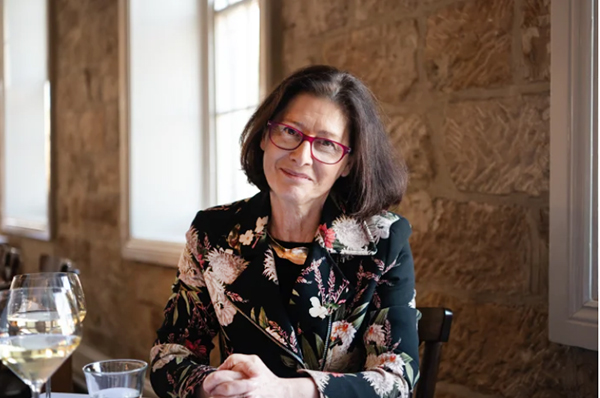 Daryl Karp is the new director and chief executive of the Australian National Maritime Museum. She has been in the job four days. Her new office is a room with a view.

“I have the most extraordinary view that anybody could dream about, let alone actually have,” she says. “It is gobsmacking. I have ferry boats, I look across to Barangaroo. You feel like you want to pinch yourself, and then you think, hang on a second, you’re working.”

We are upstairs in the brasserie of the Lord Nelson in The Rocks, Sydney’s oldest continually licensed hotel (est. 1841). Plenty of maritime history here. A couple of drinks too many in the 1800s at one of the hostelries in this neighbourhood and someone might slip you a mickey fin, a drugged drink. You’d be press-ganged out the door and wake up on a square rigger bound for wherever. Today we are drinking a less incapacitating Barossa chardonnay.

Karp arrives amid interesting times for the museum. With Prime Minister Anthony Albanese pledging a referendum on an Indigenous Voice to parliament in 2023, all interpretation relating to the European invasion and Cap’n Cook will be under the microscope.

There’s also the recent stoush with American search partners to identify the final resting place of HMB Endeavour. When the museum declared the vessel positively located in February the Rhode Island Maritime Archaeology Project promptly dismissed the claim as a “breach of contract” and “premature”.

There was no harbour view in her last job. “That’s what drew me to it [the job] and I love the ocean.” She arrives fresh from the Museum of Australian Democracy at Old Parliament House in Canberra where she was director. 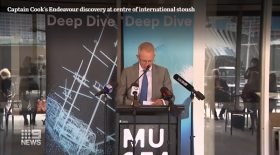 More than 200 years after Captain Cook sailed into Botany Bay, the Endeavour is at the centre of an international stoush after US officials claimed Australia jumped the gun in announcing its discovery. Click here to view video.

On her watch of almost 10 years visitor numbers more than doubled, she says. Until COVID-19 hit. Then there was the unfortunate incident last December when protesters set fire to the front doors temporarily closing the museum and causing $5 million in damage.

“That was probably the most shocking experience for as far back as I can recall,” she says. “I never thought in Australia that we would see that sort of deliberate attack. To have that assault on the building to me actually felt like it was an assault on our democracy.

“I didn’t want to have the sort of security you have at new Parliament House with people going through metal detectors or being searched. It was really about the openness and a space where any voice and any position could legitimately be heard when presented in a peaceful way.”

There have been other protests. Statues have been toppled abroad and Captain Cook statues here have been defiled and daubed in red paint around Australia Day. 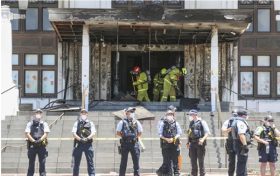 “How do you deal with ugly history? How do we redress some of the untruths and injustices,” she says. “There is no doubt there are substantial obstacles. We, as museums, have a really substantial role to play in having these difficult conversations that we, as a nation, need to be having.

“If the outcome is to draw attention and to really make a statement you could possibly mount a case for removing a statue but, for me, it is always about context. It is always more interesting to have multiple perspectives and multiple voices and we [museums] can present the evidence that allows you to reach your decision.”

What about objects perceived to have been stolen by museums? The Gweagal shield was dropped by a warrior opposing James Cook’s landing party at Botany Bay on April 29, 1770. A shield held by the British Museum, thought by some to be the Gweagal shield, is the subject of a campaign for its repatriation.

“I think where you have a substantial cultural object where a spirit [is involved] or where it belongs back in community and it has a life beyond sitting in a glass case, objects need to be returned. It’s about a balance between ownership and research. Many of our objects around the world are in pristine condition because they have had good treatment. It is an absolutely fraught and complex area.” 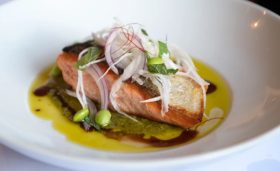 The maritime influence on our lunch extends to our ordering. We share Spanish Ortiz anchovies lined up in their tin and served with charred sourdough. For mains, Karp chooses the pan-seared king salmon (so wonderfully fresh she invites a sample tasting) with pesto, rice wine vinegar and edamame. My choice is chilli crab lobster spaghettini with bountiful and luscious seafood among the pasta.

Karp has a Jewish background and was born in South Africa. When television arrived in that country in 1976 she decided that film was the future. Aged 17 she went to Tel Aviv university to study film, became a production assistant then came to Australia in 1982 and landed a job on Behind the News (BTN) the children’s program, which embraced her twin loves of science and history.

Her CV is a marriage of media and museums. She was a board member on the Sydney Jewish Museum where the outgoing maritime museum chief executive Kevin Sumption is the newly appointed CEO. She is chair of the Canberra Writers Festival, served as chair of the Council of Australasian Museum Directors, past chief executive and managing director of Film Australia, head of factual programs (Television) at the ABC, and non-executive director for SBS. That’s just the edited highlights as they say in television. She is married to executive coach Brendan Higgins.

Talk about museums and the issue of funding is never far away. “I loved the statement from our new [arts] minister Tony Burke,” she says. On appointment, Burke issued a press release saying: “The nine-year political attack on the arts and entertainment sector is now over. The neglect, the contempt and the sabotage of the previous government has ended.”