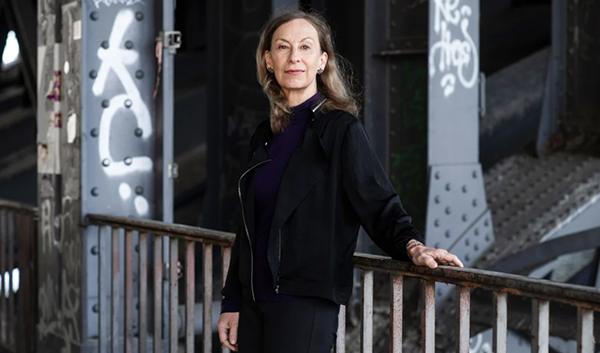 South Australian fossils dating back more than 500 million years and representing the story of the dawn of animal life on Earth have inspired a new work by composer Cathy Milliken set to premiere in an Adelaide Symphony Orchestra concert.

The ASO commissioned Milliken, its composer in association, to create Earth Plays V: Ediacaran Fields, which is supported by arts lover and chair of the Ediacaran Foundation in the Flinders Ranges Mary Lou Simpson.

Milliken says it was Simpson’s knowledge of the Ediacara fields at Nilpena in the Flinders Ranges that pushed her to research them further, leading to a greater appreciation of “how fossil imprints give us clues in the search for the development of life forms”.

The Ediacaran Period occurred between 635 million and 542 million years ago, and, according to the Ediacaran Foundation, the fossils of Nilpena – visited in 2010 by Sir David Attenborough and proclaimed as a national park last year – are the world’s single greatest record of the era. The soft-bodied Ediacaran creatures lived on shallow seafloors, with palaeontologists uncovering fossils preserved in sandstone across numerous sites, examples of which can be seen at the SA Museum.

“Being a retired high school teacher, I appreciate the educational values of the Ediacaran fossils,” Simpson says. “Their scientific significance is important in helping us understand climate change and evolution; by understanding the past it can help us better deal with the future.

“These fossils have already inspired many artistic people including composers, artists, poets and dancers.”

Milliken’s new Ediacaran Fields composition is the fifth part of an orchestral cycle titled Earth Plays and will be performed by the ASO under the baton of Benjamin Northey at its Symphony Series concert Serenity on June 24 and 25.

“The Ediacaran world seems magically peaceful, with soft-bodied creatures – sometimes quite large ones – co-existing with more plant-like biota living in a marine environment,” Milliken says in a program note, adding that the fossils preserved in layers and folds of sandstone rock have been caught in a “momentary immortalised” event.

“One wonders what they were doing just before  that moment – perhaps grazing on microbial mats, enjoying their warm, sun-filled, shallow-watered basin?”

In this edited Q&A, the Brisbane-born composer (who is now based in Berlin) offers further insight into the creation of the new work and what audiences can expect to hear.

How were you inspired by seeing the fossils at the South Australian Museum?

After visiting the museum with Mary Lou, I returned home with facts, pictures, curiosity and, somewhere along the line, the feel for the new composition.

One has to love these soft-bodied creatures that once were. Varied in shape with the fact in common that they didn’t have a mineralised skeleton and therefore were without any hard or sharp appendages, they appear very peace-loving and gentle, without the means (or desire – my interpretation) to expand their territory, seize the livelihood of others or show any militaristic opportunistic traits. No “sabre rattling” in Ediacara. 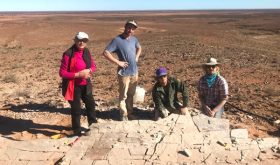 Mary Lou Simpson with a team at a Ediacara fossil field in Nilpena. Photo: Supplied.

Has Mary Lou Simpson also taken you to Nilpena to see the fossils in the Flinders Ranges?

We haven’t been yet. I know that this will add to my sense of wonderment. I visited the Thingvellir National Park [in Iceland] as a field trip for the first movement of Earth Plays. Although it was more my knowledge of the formation of rock there and the history that informed me, it meant a lot to me personally to simply visit and listen to the complete silence there whilst watching a lone bird wing its way across the plain.

I hope to visit the Ediacaran fossil field one day and will bring the experience of writing about them with me –perhaps there will be a new work that arises from the visit that includes the sound of their vastness.

What does the new work sound like and what can audiences expect?

I wanted to write a piece that exists somewhere in swirling oceans and tides as well as shifting sands, and that does justice to these small symmetrical life forms that existed peacefully in their surroundings without the more aggressive tactics of the creatures of the following age. I felt a challenge to not create musical structures that develop, but rather to create smaller cyclical cells or elements.

Reflecting the knowledge of the Ediacaran life form’s inexplicable extinction due to some event, and also the varied gentle forms that these fossils portray, the composition hovers between gentle depictions and their harmonic and rhythmic interrelations and the darker premonitions of a cataclysmic event to come. Here, overlays of all previous musical elements, teeming with life in a frenzied dance to ensure their existence, could be questioning our own environmental commitment to our existence on this planet. 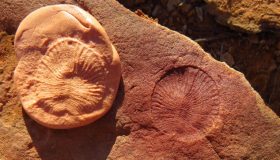 One of the most iconic Ediacaran fossils. Photo courtesy SA Museum.

Will you be in the audience for the world premiere? And what are your future hopes for Earth Plays V: Ediacaran Fields?

I will certainly be at the performance, with bells on!

I plan to issue a recording of the complete Earth Plays, with the Australian movement being the ultimate movement of the cycle. The other movements also reflect on imprints of sound, voice and life in other localities in Iceland, Japan, the USA and Greece… They are united in their reflection on human beings’ search for the meaning of life and how the traces of life are preserved over time as a reminder for us to heed.

Earth Plays V: Ediacaran Fields will have its world premiere at the ASO’s Symphony Series concert Serenity at the Adelaide Town Hall on June 24 and 25. One hour before the concert the ASO will present a Classical Conversations event at the Meeting Hall (located behind Adelaide Town Hall) with Associate Professor Diego García-Bellido, composer Cathy Milliken and Mary Lou Simpson.

The Ediacara Biota gallery at the SA Museum showcases examples of fossils found in the Flinders Ranges.