You are here: Home » Articles filed under: 'News' » Article: 'Edward Burtynsky – In the Wake of Progress'

Edward Burtynsky – In the Wake of Progress

September 8th, 2022 | Browse other: News. | Tagged with: Australian Museum, Edward Burtynsky – In the Wake of Progress | 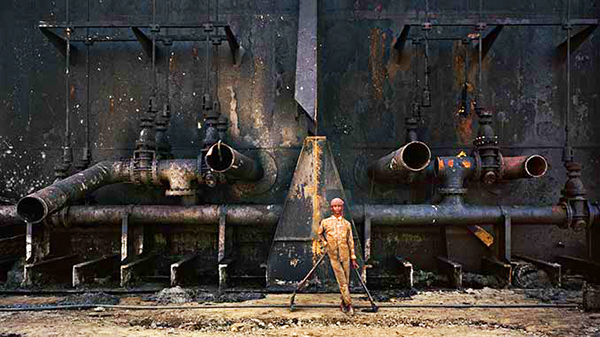 In a special out-of-season presentation, Sydney Festival will bring the work of revered Canadian photographer Edward Burtynsky – known for his large-scale depictions of humanity’s impact on the planet – to Sydney’s Oxford Street Precinct this August.

Towering across three immense nine-metre screens, Burtynsky’s staggering new work, In the Wake of Progress, will envelop and illuminate Taylors Square until 18 September 2022.

40 years in the making, In the Wake of Progress is an immersive multimedia artwork combining the most powerful photographs and film footage of Burtynsky’s career, characterised by award-winning aerial visuals and dramatic industrial landscapes.

From scenes of shipbreaking in Bangladesh to images of hazardous nickel tailings in Ontario, audiences are invited to absorb themselves in the mesmerising patterns and epic panoramas of our planet – both the natural and unnatural.

Burtynsky’s images tell the epic and confronting story of humanity’s influence on Earth with alarming artistry and extraordinary scale, urging us to rethink our legacy and seek a more sustainable future.

“I am absolutely thrilled that Sydney Festival can host the Australian premiere of In the Wake of Progress —  a powerful and urgent work from one of the world’s foremost photographers, Edward Burtynsky,” said Sydney Festival Director Olivia Ansell.

“Given the Festival’s history of transforming underutilised spaces and presenting some of the best artists from around the world, we’re pleased to work with NSW Government, to animate Sydney with this epic outdoor installation and accompanied talks at the Australian Museum- ahead of our January festival,” said Ms Ansell.

“It’s incredibly exciting to have In the Wake of Progress travel across the world to be presented by the illustrious Sydney Festival right after its world premiere in Toronto,” said artist Edward Burtynsky.

“I’m so grateful to know that we are officially at the beginning of having this work seen by as many people around the world as possible at a time when awareness of and the need for action on the climate crisis has never been more urgent,”

Premiering at Luminato Festival Toronto in June 2022, In the Wake of Progress now comes to Oxford Street’s Taylor Square, where passers-by and art pilgrims alike will experience this urgent call to action, and search for hope through the power of art.

Alongside the presentation of this ground-breaking installation, Burtynsky himself will head to our shores to take part in a series of fascinating talks, co-presented by the Australian Museum and Sydney Festival, in early September (see below!).

Edward Burtynsky is regarded as one of the world’s most accomplished contemporary photographers. His remarkable photographic depictions of global industrial landscapes represent over 40 years of his dedication to bearing witness to the impact of humans on the planet.

Burtynsky’s photographs are included in the collections of over 60 major museums around the world, including the National Gallery of Canada, the Museum of Modern Art, the Metropolitan Museum of Art, and the Guggenheim Museum in New York, the Reina Sofia Museum in Madrid, the Tate Modern in London, and the Los Angeles County Museum of Art in California.

Edward Burtynsky’s In the Wake of Progress will be on display at Oxford Street’s Taylor Square until 18 September 2022. For more information, visit: www.sydneyfestival.org.au for details.

In the Wake of Progress Talks Series at Australian Museum:

Edward Burtynsky in Conversation: Thursday 1 September – 7.30pm
Edward Burtynsky is one of the world’s most accomplished contemporary photographers. His remarkable depictions of global industrial landscapes represent 40 years dedicated to bearing witness to the impact of humans on the planet. His photographs are displayed in over 60 of the world’s major museums and most recently he was awarded the Outstanding Contribution to Photography (2022) title by the World Photography Organisation.

Many of Burtynsky’s most impactful images have now been collected and choreographed to an original score to create In the Wake of Progress, a moving digital art experience tracking humanity’s impact on the planet. Premiering at Luminato Festival Toronto last year In the Wake of Progress now comes to Sydney, and along with it – Edward himself. Hear about the life and work of this extraordinary artist in his own words when he settles in for a conversation with ABC Radio’s James Valentine.

The Power of Photography: Saturday 3 September – 11.00am
Scientific data and statistics alone can’t connect with people – but photography can. It bridges almost any gap, transcending cultural, social and political barriers to evoke emotional responses and remind us that protecting nature today means a better planet for future generations.

Join host Daniel Browning with acclaimed Canadian photographer Edward Burtynsky, the winner of the 2022 Australian Geographic exhibition, and curator and artist Dr Kristen Wehner of the National Museum of Australia, whose practice centres around transforming people’s relationships with the non-human world.

Sustainable Fashion: the Next Frontier: Saturday 3 September – 2.00pm
Every second, the equivalent of one garbage truck of textiles is landfilled or burned globally. The rise of fast fashion has dramatically accelerated global production and carbon output.

Today, textile waste accounts for 92 million tonnes annually with predictions of 148 tonnes per annum by 2030. So how do you slow down a clothing juggernaut, and temper the consumer’s obsession with everything new?

And in celebration of this special presentation of In the Wake of Progress, Sydney Festival is partnering with local restaurants and bars Cafe Freda’s, Claire’s Kitchen at le Salon, Big Poppa’s, Bitter Phew, Kinselas, and Courthouse Hotel, with a range of one-off menu items and specials inspired by the work available to patrons across its three week run.

In the Wake of Progress is proudly supported by the NSW Government.