You are here: Home » Articles filed under: 'News' » Article: 'Exit interview with Daryl Karp AM'

Exit interview with Daryl Karp AM 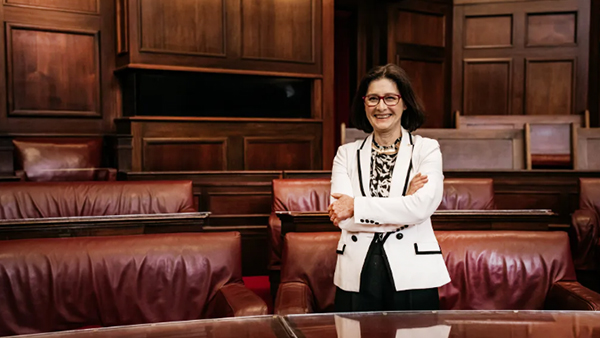 After nine years in the role, the Director of the Museum of Australian Democracy (MoAD) is moving on.

Daryl Karp AM is no stranger to executive positions in the arts. Previously, she’s held roles as the CEO and Managing Director of Film Australia, Head of Factual Programs (Television) at the ABC, and Non-Executive Director for SBS. She has also served on the Boards of the Sydney Jewish Museum and the Australian Children’s Television Foundation.

Now, as she prepares to leave what she describes as one of the most cherished roles of her career, she reflects on the privilege of sharing stories of Australian democracy with the wider community.

Transforming a museum for the people

When Karp started in the role of Director of the Museum of Australian Democracy (MoAD) in 2013, she remembers telling an Irish friend of hers about the new job, and his response planted an important seed of ambition in her mind.

‘He said to me, “Oh, that is just like Australia to put democracy in a museum – ours is a living thing,”’ Karp recalled.

‘I suddenly thought yes, it is a lived and vital experience, and that’s the vision I want to bring to the Museum.’

Among Karp’s other aims was to double MoAD’s visitation in three years, in a place she describes as sometimes having ‘more staff in the building than visitors’.

‘We ended up achieving that goal in less than three years, and now we are one of the top two or three places to visit [in Canberra] on Trip Advisor,’ Karp said. ‘That’s certainly one of my proudest achievements,’ she added.

Karp also reflected that alongside changes to the Museum’s public reputation, significant internal cultural shifts have taken place during her time.

‘I don’t think it’s right to say that I created that [cultural] change,’ Karp said, ‘because I am part of an extraordinary team of visionary people who all contributed to that. But I think I enabled that new [organisational] culture to emerge.’

Witnessing democracy as a lived experience

It’s clear that Karp is pleased with the Museum’s upward trajectory over her time in the job, though she’s also aware that the idea at the very core of the Museum’s existence has been subject to a more mixed reception.

There has certainly been a decline and growing dissatisfaction in democracy in Australia over the past decade.

‘And I think that, especially at this time, where around the world democracies are coming under threat as never before, this is certainly not the time to take democracy for granted,’ she observed.

Karp also cited the deliberately lit fire at Old Parliament House (where MoAD is located) in December 2021 as an unsettling low point in the Museum’s history.

‘The fire was devastating,’ she said. ‘In Australia, we’ve very rarely resorted to violence and vandalism as part of an action to be heard, and it was awful to see that happen in this case.

‘Then to see the physical damage it caused to the Museum, and the temporary closure that followed – that was a difficult time,’ she added.

Leaving on a high

After overcoming these challenges, Karp has recently overseen the Museum’s reopening (in April 2022) and launched its new permanent exhibition space Democracy DNA. After these momentous highlights, she admits she is not quite ready to leave.

‘This role is served in five year terms,’ she explained. ‘And there is a maximum two term [10 year] tenure, which means I will finish just six months shy of its ten year limit.

‘That’s actually one of the regrets I have,’ she continued. ‘I’m leaving a little bit sooner than I would have liked. There is a bit more work that I wanted to be here to be part of, but my new role was too good an opportunity to pass up.’

Karp will soon take up a leadership position at another national institution – the Australian National Maritime Museum – and says she will remain closely connected to the arts.

‘The Museum of Australia Democracy isn’t actually considered part of the arts portfolio as it is,’ she commented. ‘We’re currently part of the Department of Prime Minister and Cabinet.

‘But I see art everywhere,’ she continued. ‘I think there is theatre in everything! I mean, look at moments of sport, and politics.’

Interestingly, in terms of how prominently the arts feature within Australia’s democracy, Karp still sees room for change.

‘I actually think too many people still view art in Australia as an elitist thing, and it’s simply not. So, I think there’s a recalibration that needs to happen at all levels – in government and in the minds of the general public to change that,’ she said.

Daryl Karp will begin her role as Director of the Australian National Maritime Museum on 4 July 2022.