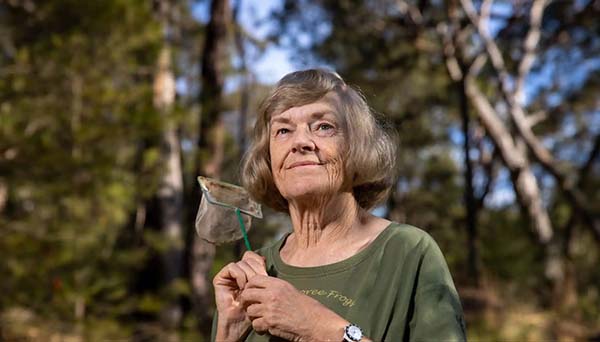 Donna Lu, Frogs that lay eggs on land – new WA genus named after teacher whose lab was a campervan, The Guardian, 27 June 2022

Anstisia biological group named after Marion Anstis, who wrote an acclaimed book on amphibians after retiring as a music teacher

Four frog species in Western Australia that lay their eggs on land have been identified as a new genus and named after a retired high school music teacher-turned-scientist.

Researchers have classified the frogs into the distinct biological group Anstisia. Their tadpoles develop entirely on land and never contact the water of a creek or pond before becoming adults. Instead, they swim around in a jelly-like pool created by laid eggs and are nourished by yolk reserves. 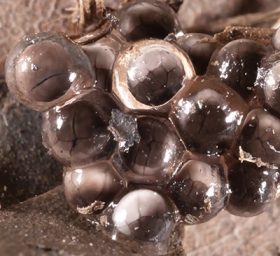 The genus has been named in honour of Marion Anstis, who worked as a high school teacher for 31 years before cataloguing virtually all known frog species on the Australian continent.

“Her book, Tadpoles and Frogs of Australia, is one of the best publications on frogs out,” said Grant Webster at the University of New England, one of two scientists who classified the genus.

“She looked at the … life history and tadpole development of basically every species of frog in Australia. That’s over 200 species.”

Webster said he had met Anstis when he was 11 or 12, at a frog and tadpole study group. “She’s been a bit of a mentor to me for the last couple decades,” he said. 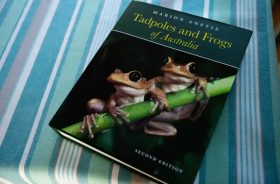 ‘One of the best publications on frogs out.’ Photograph: Carly Earl/The Guardian.

Anstisia was the first frog genus in Australia to be named after a person, Webster said. “It does happen a lot in plants – like Banksia, for example, after [Joseph] Banks.

“Usually, a frog scientist of such prestige and contribution will get a frog [species] named after them eventually. She’d never had anything named after her.”

Anstis herself described six new species of frog. She developed an interest in the amphibians at an early age, and in her teaching years spent her free time studying them.

After retiring from teaching in 2001, she spent a decade travelling around Australia in a campervan and four-wheel drive, doing the research that would form the basis of Tadpoles and Frogs of Australia and a PhD thesis at the University of Newcastle.

“The campervan was my laboratory whenever I stopped at caravan parks,” Anstis said. “I would set up my microscope in that and study the tadpoles and eggs when I got them.”

Now 73, Anstis is a research associate at the Australian Museum and continues to carry out fieldwork.

She recalled being “a bit embarrassed” when Webster suggested naming the genus after her. “I think it’s jolly good of Grant to give the recognition and not something at all that I expected,” she said.

Fittingly, Anstis has studied the frogs in her namesake genus.

One of the species, Anstisia alba, is listed as critically endangered and occupies a total area of less than 2.5 sq km. Anstisia lutea is considered near threatened, while Anstisia vitellina is vulnerable and Anstisia rosea is listed as being of least concern. 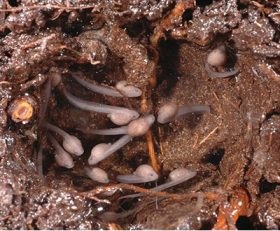 The four species had previously been classified as belonging to the Geocrinia genus, which has three other species of frog.

Geocrinia frogs also lay their eggs on land but rely on rain to wash their tadpoles into bodies of water. They also have a biphasic call while Anstisia frogs have a monophasic call, according to Webster.

Anstis had previously documented the differences between Anstisia and Geocrinia tadpoles, he added. While these differences have long been known, it took longer for the evolutionary distinctions to be established. 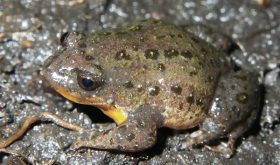 One strict rule for a genus is something called monophyly – the requirement that all the species within it must share a single common ancestor.

Webster said research showed Anstisia and Geocrinia were both “monophlytic groups that could be partitioned into two genera” – they have two distinct ancestors that, if you go back further in the phylogenetic tree, share a common ancestor. “That genetic data is what really upholds the entire proposal.”

Tim Beshara, manager of policy and strategy at the Wilderness Society, said WA had some of the most unique lifeforms on the planet.

“To have an entire new genus, part of an already Australian endemic frog family, really shows how isolated this part of the world was from the rest of Australia,” he said.

“It’s good that we’re seeing things like the abatement of native forest logging in WA and governments starting to look to what the conservation future is for the area more broadly.

“We’d like to see the Western Australian and the Australian government really put a microscope over whether the national heritage system has captured all of the special Australian natural values appropriately.”

The new genus was described in a paper published in the journal Zootaxa.