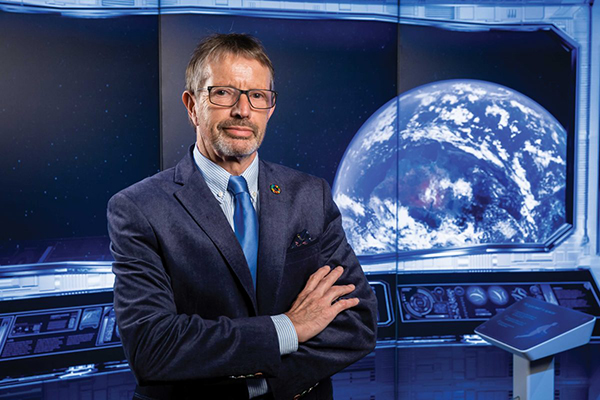 Director of Questacon, Professor Graham Durant AM, will leave the science centre next month after almost 20 years at the helm. Photo: Questacon.

For Graham Durant AM, working as Director of Questacon hasn’t been a job – it’s been a passion. But after almost 20 years at the helm of the National Science and Technology Centre, he says it’s time to go.

“When I celebrated my 70th birthday this year, I figured it was time to step aside for someone younger – and it was also time for me to repay the large debt of time owed to my family over the past 45 years of my working life,” he says.

Professor Durant describes his work at Questacon as the best of times. He estimates he has worked with a total of 25 ministers and parliamentary secretaries over the near 20 years, quickly getting used to explaining “what you do and who you are”, not the hardest of tasks for a man who has spent most of his working life as a science communicator.

He began his career training as a geologist at the University of Wales before moving to Scotland and the University of Glasgow where, for the next 25 years, he was responsible for the management of the geology collection, research and lecturing.

“It was when I was working at the University of Glasgow that I got involved in exhibitions, so progressively, my interest in geology morphed into an interest in science communication – explaining to people what we were doing. That put me in the frame for coming to Australia.” 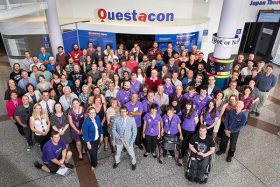 Professor Graham Durant gathers, pre-COVID, with his staff and volunteers for a class photo. Photo: Questacon.

His first visit to Australia was in 1996 when he was setting up the Glasgow Science Centre and had come down to see how Questacon worked. Six years later he was back as a delegate, this time when Questacon hosted the Science Centre World Conference.

It hadn’t started as the best of trips, but was soon to improve. He flew over from India where he had caught a nasty bug only to arrive in Australia to find his luggage had not joined him. “I was in a bit of a state, I must say,” he says.

But it was while he was here the second time in 2003 that he got the phone call offering him the job to head Questacon.

“I remember saying to my wife, were we up for an adventure? It was only supposed to be a five-year contract but we threw ourselves into Australia … and here we are, more than 19 years later.”

Professor Durant says he didn’t have a deep knowledge of Australia prior to moving here, but the first early surprise was the scale of the country.

“There were rivers that didn’t reach the sea,” he says, “and the desert … we hadn’t seen anything like it before. The cultural aspect was also very different. I had no deep knowledge of Indigenous Australia so that was a steep learning curve too.” 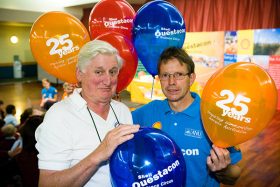 “But part of the fascination of Australia for me has been with this job, I have learned as I go. The fact that there’s so much to learn is one of the joys of working at Questacon.”

But it hasn’t always been an easy time for the former geologist. He describes 2020 as the most challenging of times.

“It wasn’t just COVID,” he says. “It was COVID on top of the hail storms, on top of the Namadgi bushfires – it was a pretty dreadful year for all of us.

“We had to switch from a centre that was open to the public every day to one of digital delivery – and we had to find work for a lot of people. Lots of our staff went to work with Services Australia to help them process claims – so we managed to ride out the storm.”

While not everything is back to normal, Professor Durant says seeing about 3000 people come to Questacon on one day over a recent weekend, was the best reward.

Professor Durant will leave Questacon on August 12 – and what’s the first thing he’ll do?

Chances are there’ll not be an office involved – at least for a while. He plans to get to know his bicycle, kayak and walking legs again – and his garden.

“After a few months of that we’d like to do some travel around Australia, then next year we plan to go to the UK.

“After that, I’ll think about my third career – whatever that will be.”

But he does know it will be in Australia. “Canberra is our home now”.

Positions Vacant » View All
» Executive Support – Canterbury Museum
» Visitor Experience Host – Australian Museum
Latest News » View All
Grassroots movt restores respect for science
Evidence-informed decision-making in Canada Read more.
Prof Graham Durant AM valedictory address
- science centres’ origins & critical mission Read more.
Carbon offsetting is just greenwashing
& art world must stop pretending otherwise Read more.
Antony Gormley’s Alan Turing approval
at Cambridge but work at Imperial pending Read more.
AM 100k & Powerhouse 49k visitation records
in 2 wks July school hols with NSW Gov support Read more.
Top +
Council of Australasian Museum Directors c/o Mr Brian Oldman, South Australian Museum PO Box 234 Adelaide, South Australia 5001 Australia, © CAMD 2022
Copyright: All information and resources provided on this website remain the copyright of the Council of Australasian Museum Directors. Permission is granted for viewing and downloading for personal and not for profit purposes. Those wishing to reproduce any materials for commercial, educational or other uses are requested to contact us.
Disclaimer: The content of this website is provided for information purposes only and is not intended as a substitute for professional advice. No claim is made as to the accuracy or authenticity of the content of the website. The Council of Australasian Museum Directors does not accept any liability to any person for the information or advice (or the use of such information or advice) which is provided on this website. The information on our website is provided on the basis that all persons accessing the site undertake responsibility for assessing the relevance and accuracy of its content. No responsibility is taken for any information or services which may appear on any linked web sites. Hostgator.
.