August 18th, 2022 | Browse other: News. | Tagged with: Evidence-informed decision-making in Canada, How a grassroots movement restored respect for science | 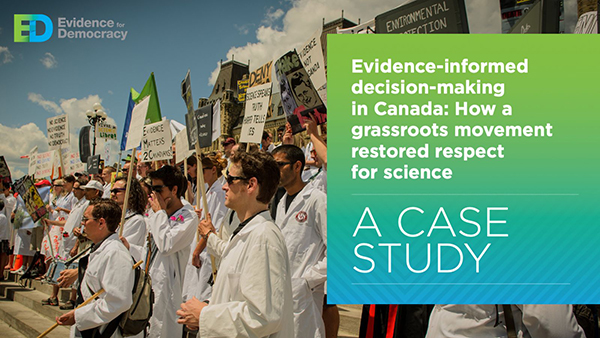 Evidence-informed decision-making in Canada: How a grassroots movement restored respect for science | A Case Study, Evidence for Democracy, August 2022

In 2012, evidence-informed decisions were becoming an endangered species in Canada. In its sixth year in power, the Conservative government under Stephen Harper was making increasingly bold attempts to sideline science in an effort to weaken objections to Conservative policies. The wilful exclusion of science from policy decisions and the muzzling of government scientists eventually sparked a rebellion by scientists and their supporters, leading to the creation of Evidence for Democracy (E4D). Canada’s grassroots movement eventually restored evidence-informed decision-making (EIDM) in government. This case study explores the events from 2006 to the present to understand what worked and highlight what other jurisdictions may be able to learn and apply from how this was accomplished. Spoiler alert: the creation of a centralized hub like E4D and the availability of scientists who are willing to push for EIDM are indispensable components.

This case study is also available in French.