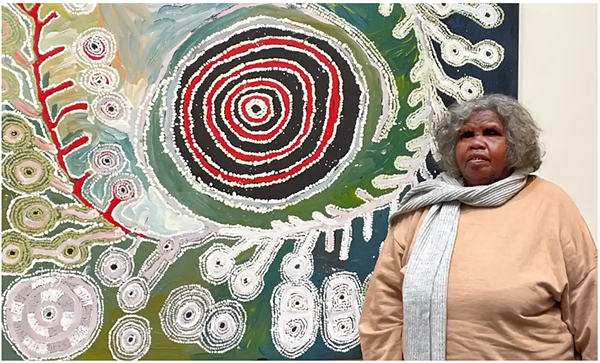 The senior Pitjantjatjara artist is the first woman to win the $100,000 award since its inception in 2017.

Senior Pitjantjatjara artist Tuppy Ngintja Goodwin has become the first woman to win Australia’s richest landscape prize since its inception in 2017, with her work titled Antara.

Announced in Hobart on Friday, Goodwin’s work was chosen from among 35 finalists for the $100,000 acquisitive Hadley’s art prize, with the works exhibited across two galleries in the city’s historic Hadley’s Orient hotel.

Goodwin is the chairperson of Mimili Maku Arts centre, which lies 500km south-west of Alice Springs. Her winning painting is about the Tjukurpa story of the witchetty grub, a storyline of the Antara region, in the Anangu Pitjantjatjara Yankunytjatjara (APY) lands of north-west South Australia.

“The Witchetty Grub story is the main [story], it’s truly huge, it’s a big ceremony,” Goodwin said in an artist statement. “It’s a very old storyline from a long time ago, and I was taught about it when I moved to Mimili as a young girl. Now I look after it and teach the children about it, the Antara story.” 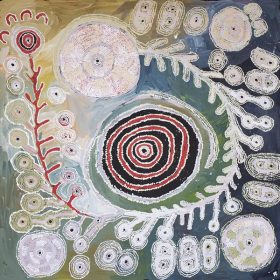 The judges – acclaimed Waanyi multimedia artist Judy Watson, the Art Gallery of New South Wales’s head curator of Australian art, Wayne Tunnicliffe, and the Tasmanian Museum and the Art Gallery’s senior curator of art, Mary Knights – praised Antara as “an incredibly resolved work … The colour palette is fascinating – the colours push and pull across the painting. The work generates movement. You can imagine the artist singing; it’s almost like a performative work.”

“The Tjukurpa resonates through the work,” they said. “There is a diversity of brushstrokes and mark-making in a distinctive, raw, and energetic way. This powerful painting is full of life.”

Speaking through interpreter Partimah Fielding, daughter of the artist Robert Fielding, Goodwin said she was “pleased to show the storyline that holds so much for her community” and “happy to share the story with the whole of Australia”.

Tasmanian-based artist Catherine Woo won the packing room prize for her mixed media on aluminium work A Moment in the Day.

“The work aims to evoke a particular quality of light that occurs in the landscape,” Woo said in her artist statement. “Scattered sunlight – reflected and iridescent: bouncing off rippling water, moving leaves, salt lakes, shards of quartz.”

The $10,000 residency prize, which houses the winning artist at the Salamanca Arts Centre for a month, went to Darwin artist Max Bowden for her work And a nice day was really had by all. 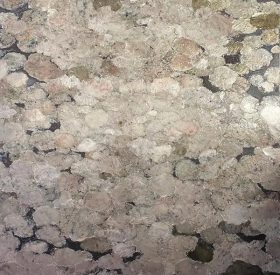 A Moment in the Day by Catherine Woo. Photograph: Hadley’s art prize.

Established in 2017 by Tasmanian philanthropists Don Neil and Annette Reynolds, who own the 1834 hotel that hosts the exhibition, Hadley’s arts prize is double the win of the $50,000 Wynne prize for landscape and sculpture, which has been held every year since 1897 and in conjunction with the AGNSW’s Archibald prize since 1921.

With his large acrylic, oil and lacquer on aluminium work Entering Macquarie Harbour, Tasmanian artist and academic Neil Haddon has earned the distinction of being a finalist in the prize every year since its inception. 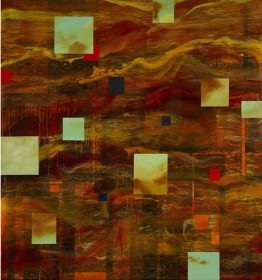 Haddon said Entering Macquarie Harbour was inspired by the 1815 handwritten account of James Kelly’s circumnavigation of Tasmania in a whaling boat. As Kelly approached the west coast harbour, the vessel became shrouded in smoke from what he assumed was a local hunting expedition from the island’s Indigenous people.

Haddon’s earlier work The Visit, an imaginary depiction of British author HG Wells cycling through a Tasmanian landscape, won the Hadley’s art prize in 2018 and occupies one of the hotel’s pride of places on the gallery’s walls.

Through sheer size, Haddon’s work is one of the most dominant in the exhibition, along with Whyoulter’s Wantili, Canning Stock Route Well 25.

Speaking through her grandson Cyril Whyoulter, the Kartujarra artist, who is in her 80s, said in her statement that her family travelled the Canning stock route many times. 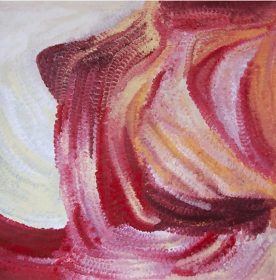 “She saw whitefellas there for the first time, Canning mob when they were travelling up and down the stock route with the bullock,” her grandson says in the statement.

“She was a young girl walking around the Wantili.”

Whyoulter is a four-time finalist in the National Aboriginal and Torres Strait Islander art awards, the general painting category of which she won last year.

Along with Whyoulter and Haddon, other well-established artists featuring among the finalists include Baker, Pat Brassington, Paul Miller, Mary Tonkin, Michelle Woody and Ken Done.