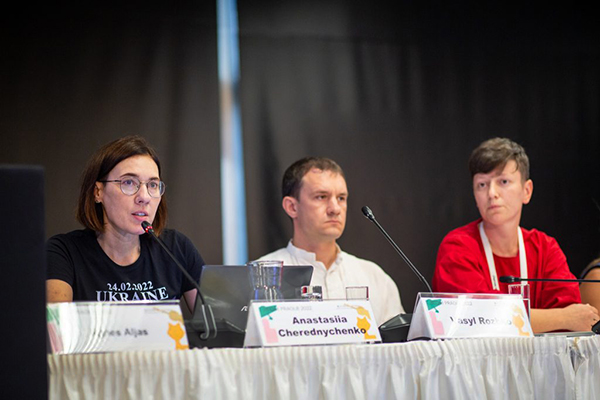 Anastasiia Cherednychenko, the vice-chair of ICOM Ukraine; Vasyl Roshko; and Kateryna Chuyeva of ICOM Ukraine. Cherednychenko called for the expulsion of ICOM Russia at the “Heritage Protection Responses in Ukraine” panel at the ICOM General Conference Prague 2022. Photo courtesy of ICOM.

Anastasiia Cherednychenko, the vice-chair of ICOM Ukraine, called for the expulsion of ICOM Russia from the organization.

Russian museum staff members from the International Council of Museums (ICOM) have violated the organization’s code of ethics with their actions in Ukraine, according to charges made by several ICOM members at the organization’s General Conference Prague 2022.

Ahead of today’s official opening of the three day event, ICOM representatives from 10 nations participated in a Sunday panel titled “Heritage Protection Responses in Ukraine,” about how they have been working to protect the nation’s cultural heritage in the face of war. They also discussed how Russian museum workers have aided and abetted the invasion, which one panelist likened to “genocide on cultural grounds.”

Most strikingly, Anastasiia Cherednychenko, the vice-chair of ICOM Ukraine, called for the expulsion of ICOM Russia from the organization. She alleged that Russian museum employees have helped Russian forces illegally transfer artifacts from Ukrainian collections, and have organized exhibitions that serve as propaganda supporting the invasion.

Since its founding in 1946, ICOM has never expelled a nation committee. ICOM Russia did not send a delegation to this year’s conference. 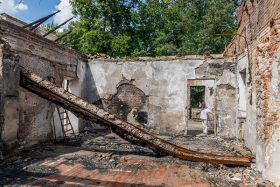 The completely destroyed building of the museum of the Ukrainian philosopher Hryhoriy Skovoroda after a Russian bombardment. Photo by Mykhaylo Palinchak/SOPA Images/LightRocket via Getty Images.

Many of the panelist were outspoken in their criticism of Russia, with Klaus Staubermann, CEO of ICOM Germany, apologizing for “getting emotional” in his plea for an end to cultural destruction.

In response to concerns about the actions of ICOM Russia, the parent organization has announced plans to establish a protocol for following the ICOM Code of Ethics for Museums at times of conflict. This will be a priority for ICOM’s Standing Committee for Ethics (ETHCOM) after the conference.

“I hope it’s a start for a new stage of discussion inside ICOM,” said Kateryna Chuyeva, Ukrainian Deputy Minister for Culture a board member of ICOM Ukraine, during a press conference following opening remarks.

To date, 450 cultural landmarks have been destroyed or damaged during the fighting, including 34 museums, according to the Ukrainian Cultural Foundation’s map of cultural losses. 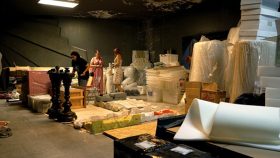 Employees of Khortytsia, a museum-island in Zaporizhzhia prepare artworks to take away for safekeeping in the west of the country in Zaporizhzhia on August 12, 2022. Photo by Marina Moyseyenko/ via Getty Images.

Numerous presentations at yesterday’s Ukraine panel included photographs showing the nation’s museums demolished by Russian bombings. Chuyeva also shared a photograph of a Ukrainian museum gallery stripped down to the studs, its contents evacuated for safekeeping.

One slide offered a series of damning quotes from Mikhail Piotrovsky, director of St. Petersburg’s Hermitage Museum, from an interview with Russian news outlet RGRU. 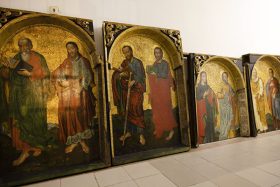 Artifacts are moved to storage in case of possible damage from shelling at the Andrey Sheptytsky National Museum in Lviv, Ukraine, in March 2022. Photo by Dan Kitwood/Getty Images.

“Our latest exhibitions abroad are just a powerful cultural offensive. A kind of ‘special operation,’ if you will, which a lot of people don’t like,” Piotrovsky said. “But we are coming. And no one will be allowed to interfere with our offensive.”

“My opinion on the military actions is not that straightforward either. On the one hand, wars bring blood and murder,” he continued, “but on the other, this is how people, this is how nations affirm themselves.”

ICOM has been cognizant of the dangers facing Ukrainian cultural heritage since the start of the conflict, issuing a statement condemning Russian military aggression on February 24, the first day of the invasion. 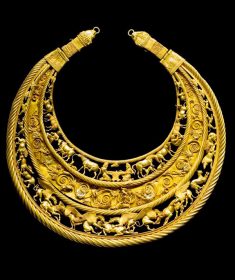 Scythian golden pectoral from the royal grave at Tolstaja Mogila kurgan, 4th century BCE, collection of the Museum of Historic Treasures of Ukraine, Kiyv. Works like this are in danger of being looted during the Russian invasion and could appear on ICOM’s Red List for Ukraine. Photo Pictures From History/Universal Images Group via Getty Images.

In an effort to fight the trafficking of looted Ukrainian cultural goods, ICOM is planning to release an Emergency Red List of Cultural Objects at Risk in the coming weeks. The project, announced in late June, follows a red list for 10 countries in Southeast Europe released last October. Previous red lists have highlighted risks to cultural heritage from nations such as Iraq.

In Ukraine, objects that may be targeted by traffickers include Scythian artifacts, manuscripts, paintings, folk art, rare coins, and religious items.

“ICOM condemns the deliberate destruction of Ukrainian cultural heritage and reminds Russia of its obligation as as a state party to the convention of The Hague and for the protection of cultural property in conflict,” ICOM president Alberto Garlandini told Artnet News during a press conference at the event. “The deliberate destruction of cultural heritage is a war crime and can be prosecuted by the international court.”