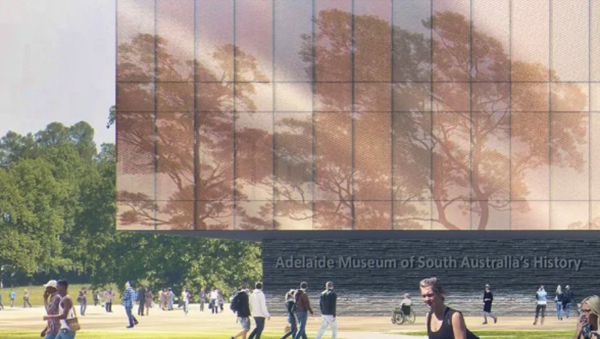 UPDATED: First images have been revealed of a concept design for a new Adelaide Museum of South Australia’s History, with the state government currently considering a $250,000 business case for the project.

An early design of a new museum by Baukultur architects is one of three business case concepts delivered to the History Trust of South Australia, after the Trust was awarded $250,000 from the former Marshall Government to explore options.

History Trust chief executive Greg Mackie played down the importance of the initial designs saying it was “purely illustrative of a concept for a non-specific site” and it was early days to be speculating about an “ambit vision”.

However, it is the first glimpse of the ideas being investigated by the History Trust after it was awarded the funding to develop the business case for a new museum.

The funding was focused on the trust exploring possible locations for a museum dedicated to displaying precious items from the State History Collection’s thousands of artefacts, along with assessing its cultural and economic merits. 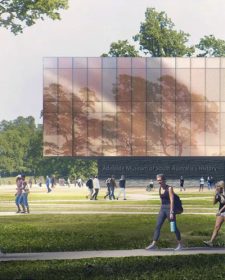 At the time funds were announced for the business study, Trust chair Elizabeth Ho said a new museum plan had been in the group’s sights for 40 years.

But Mackie said this week that the concepts were part of a larger outline business case that had no formal status at this stage.

Baukultur this afternoon released a second proposal for the museum, showing it located inside the heritage-listed Freemasons Hall on North Terrace.

Mackie told InDaily in April that the History Trust was considering moving into the the Freemasons Hall as one two potential new homes.

It comes after the incoming Labor State Government cancelled the History Trust’s plan to move into  Ayers House on North Terrace, after previous tenant the National Trust was ejected by the Marshall Government. 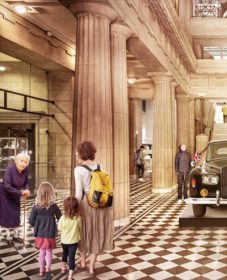 “We are regularly in discussions about how we can best support the work of the History Trust to reach more South Australians and the South Australian Government is currently considering the initial business case,” he said.

The History Trust of South Australia was started in 1981 by an act of parliament that enshrined its role in preserving the state’s past.

Over 40 years, the Trust’s State History Collection has grown to more than 40,000 objects including Colonel Light’s original plan for the City of Adelaide and Governor Gawler’s ceremonial plumes.

The Trust already runs the state’s Migration Museum, the National Motor Museum and the South Australian Maritime Museum plus works with the State Library to manage the Centre of Democracy.

Construction started on Adelaide’s new Aboriginal and Torres Strait Islander arts and cultures centre on North Terrace last year, with expectations it will attract around 700,000 visitors to South Australia each year when it opens in 2025.

The $200 million centre will be called Tarrkarri, which means ‘the future’ in Kaurna, the language of the traditional owners of the Adelaide Plains.