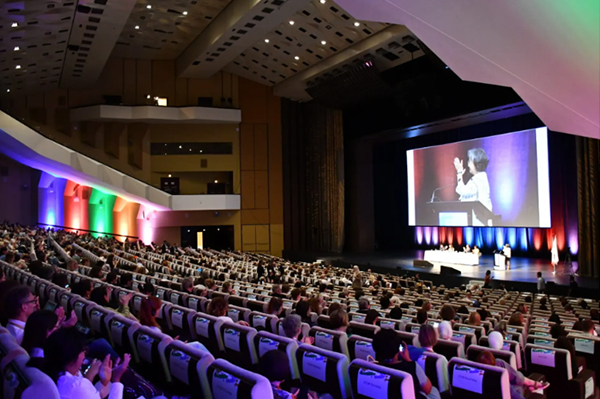 A new definition for museums has been voted in at the International Council of Museums conference in Prague today. Courtesy of Icom.

Tom Seymour, What is a museum? Icom finally decides on a new definition, The Art Newspaper, 25 August 2022

The 50-year-old statement has been overhauled at the International Council of Museums conference in Prague today.

The definition of a museum has significantly changed for the first time in 50 years after an unanimous vote by members of the International Council of Museums (Icom) in Prague today.

Representatives from more than 500 museums globally voted to pass the new definition at the Icom Extraordinary General Assembly in the Czech Republic capital, with 92% voting in favour of the new definition. It includes, for the first time, phrases like “inclusivity”, “accessibility”, “sustainability” and “ethics”.

Alberto Garlandi, the president of Icom, said the new definition, was “common ground for museums all over the world.” He tells The Art Newspaper: “This new definition is aligned with some of the major changes in the role of museums today. We have been forced to change. I really think that this this decision will improve the role of the museum around the world.”

The new definition, in full, reads as follows:

A museum is a not-for-profit, permanent institution in the service of society that researches, collects, conserves, interprets and exhibits tangible and intangible heritage. Open to the public, accessible and inclusive, museums foster diversity and sustainability. They operate and communicate ethically, professionally and with the participation of communities, offering varied experiences for education, enjoyment, reflection and knowledge sharing. 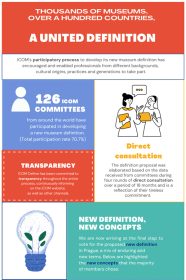 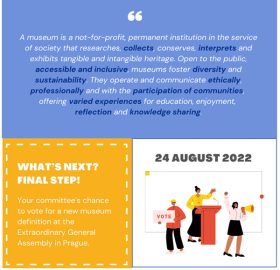 Icom’s infographic for the new museum definition. Courtesy of Icom.

The definition will be assumed by Unesco, and will help to determine whether new private galleries and institutions around the world can describe themselves as an official recognised museum.

The new definition has been hard fought. In 2019, at Icom’s last conference in Kyoto, Japan, a consensus on a draft definition was not reached by the General Assembly before it came to a vote. The lack of a resolution meant the old definition of a museum—one created in the 1970s and last amended in 2007—remained firm.

“The old definition did not reflect the reality of Icom or the reality of museums around the world,” Bruno Brulon, the co-chair of “Icom Define”, the standing committee for the museum definition, told The Art Newspaper.

Brulon recognised that the new definition was necessarily the result of a process of negotiation. “A compromise has taken place,” he says. “We had to speak to and listen to people with very different perspectives. Some people think a term like repatriation is a very political word. But this new definition is still, I think, a very progressive statement.”

Phrases such as decolonisation, repatriation and restitution—the central issues for many museums in the developing world—were notably absent in the new definition.

Notable voices, including spokespeople from Icom’s own National Committees, said they felt the definition was not progressive enough, and was perhaps the result of an over-compromise from more conservative bodies in the museum community.

“To be honest, it’s not progressive enough for me,” said Inkyung Chang, the founding director of the Iron Museum in Seoul, Korea, and the vice president of Icom Korea, in a panel debate about the new definition. “But we have to find common ground. Any museum can now take it and use it. It can be interpreted. Maybe it’s not strong enough, but you can do strong things in your museum.”

Muthoni Thangwa, the development manager at the National Museums of Kenya and the spokesperson for Icom International Committees, paid homage to the definition during the panel. She said: “We are the generation that has chosen to make changes. This is the time for transformation; a time to rethink the idea of a museum.”

But Thangwa was vocal about the fact that the term of deaccessioning—the process by which a work of art or artefact is permanently removed from a museum’s collection, often to return to its place of provenance—was not included or recognised in the new definition. She said deaccessioning of artefacts to once-colonised and now independent nations is happening throughout the world, but has not been adequately recognised by Icom.

“We are sitting here and debating what should be and what can be a museum, but life and the world and the forces of the current activism in the world, have set in motion a new museum. That new museum exists out there,” she said. “Whether we define it or don’t define it, it is already in motion. Ladies and gentleman, it is going to happen. It is the future of our sector.”

She cited recent examples of restitution concerning the British Museum in the UK, the Humboldt Forum in Germany and the Smithsonian Institution in the US. “I hope at some point the definition of the museum can be ahead of the processes of deaccessioning that are taking place out in the world,” she said. “We are not giving enough thought to the communities to whom these precious works are going to be returned. They have to re-accession them into their living culture, and that is much more difficult than deaccessioning. We should be recognising that.”

The development of a new definition is the result of the largest outreach project in the organisation’s history. Museum representatives from 126 of Icom’s National Committees—encompassing the organisation’s more than 50,000 members were spoken with over an 18-month period and over four distinct rounds of consultation by the the Icom Define committee. Museums across Africa, Latin America and the Asian Pacific were consulted extensively in the development of the new definition.

The details of how the definition will now be materially implemented are still to be worked out. A new president and executive board will be elected during Icom’s forthcoming Ordinary General Assembly and will then meet “in due course to set the next steps for the implementation and adoption of the new definition”.