You are here: Home » Articles filed under: 'News' » Article: 'India & Pakistan 75 – exhibitions around'

August 18th, 2022 | Browse other: News. | Tagged with: India and Pakistan turn 75: exhibitions on independence and partition to see around the world | 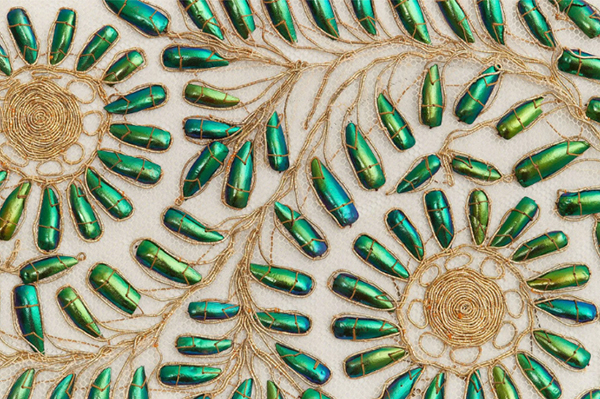 Kabir Jhala, India and Pakistan turn 75: exhibitions on independence and partition to see around the world, The Art Newspaper, 12 August 2022

From Kolkata to Chicago, here are 11 shows that deal with the many histories of nationhood and freedom in the subcontinent.

As the nations of India and Pakistan celebrate 75 years of independence—and commemorate the act of partition that brought them into being—cultural institutions are hosting exhibitions and artistic interventions to mark the moment. These provide not only educational information on an important period of history, but also a chance to reflect on the state of both nations today. In doing so, artistic responses can help us to consider partition as an ongoing process; an act that is continually reperformed and still shapes the futures of both countries.

Many of these exhibitions also consider how the mass displacement and violence that occured 75 years ago is connected to other communities and historical events across the world—such as the expulsion of South Asian migrants from Uganda exactly 50 years ago. Accordingly, not only will independence day-related exhibitions take place in South Asia, but also in countries with significant South Asian diasporas such as the UK, the UAE and Australia, whose migrant communities also have their own unique relationships to partition and colonalism. 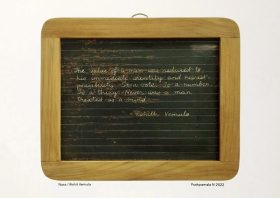 A chalk tablet containing lines from the 2017 suicide note of the Dalit (the lowest rank within India’s caste system) student Rohith Vemula is one of the more poignant inclusions in a show that casts a critical eye back on 75 years of Indian history to ask: what exactly has the nation achieved with its independence? More circumspect than celebratory, this extensive group exhibition of paintings, poems, historical artefacts and digital installations questions the definitions and limits of the freedoms that have been won during India’s post-colonial period, and how they are being further eroded in its current political climate.

Accordingly, the show eschews the triumphant narrative being pushed forth by the Indian government in the run up to independence day celebrations. A number of works broach charged recent chapters of the nation’s history, including the protests around the Citizenship Amendment Act (CAA) and National Register of Citizens (NRC) and the Hindu nationalist, casteist and majoritarian impulses that prompted them. The exhibition is organised and hosted by Safdar Hashmi Memorial Trust, a forum for promoting democratic unity among artists named after the 20th-century Communist playright. Its co-founder, Ram Rahman, says that the exhibition will travel to a number of different Indian cities this year.

More than 160 works from the collection of the Indian commercial art gallery DAG are on show in the country’s oldest art institution, the Indian Museum in Kolkata. Watercolours from the 18th-century depicting East India Company traders join paintings of 20th-century protest movements to tell a non-linear story of Indian independence that stretches into the modern day. Later this year, four galleries in the museum will reopen to the public after a major refurbishment. 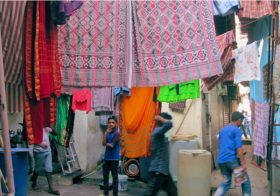 Pictures taken by photographers from Dharavi will be on show at the first annual Independence Project exhibition at IFBE.
Courtesy of Dharavi Art Room and Aqui Thami.

The newly launched creative hub IFBE, located in a former ice factory in Mumbai’s Ballard Estate, will host its first annual Independence Day exhibition: a creative arts festival taking place across six days. This includes a selling show of photography by seven artists who grew up in the city’s famous Dharavi slum, all proceeds of which will go the non-profit Dharavi Art Room.

The foundation behind Pakistan’s most prominent art exhibition will soon create a digital repository around 75 years of Pakistan, with the intention of establishing a virtual museum of the nation’s cultural history. Curated sections for this project include the women’s movements of the 1980s, national cinema and oral histories.

Google Arts and Culture has launched “a celebration of the unwavering and undying spirit of India, and its 75 years of independence”. It features illustrations of the historic milestones of the nation’s path to freedom from colonial rule and beyond. These include India’s space programme, women’s rights movements and its first democratic votes. The project was initated by India’s tourism minister G. Kishan Reddy. 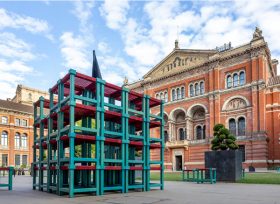 Stools akin to those used in the villages where Osman Yousefzada’s parents were born are placed in the V&A’s courtyard for What Is Seen and What Is Not
© Victoria and Albert Museum, London.

Osman Yousefzada: What Is Seen and What Is Not, Victoria & Albert Museum, London, until 25 September

The British-Pakistani fashion designer-cum-artist Osman Yousefzada has made a series of artistic interventions across one of the most splendid—and imperial—buildings in all of London: the Victoria and Albert Museum (V&A). A second-generation immigrant raised in Birmingham, Yousefzada presents aspects of his family’s history in tandem with that of their colonisers, questioning the hierarchies that have long-dictated the institutional presentation of both.

A trio of tapestries made in a Karachi factory hang in the atrium depicting figures from an Indian and Ottoman book of omens. In the museum’s courtyard, stacks of daybeds in bright green and blue mimic those from the villages both his parents come from. Besides them, a wooden vessel typically used by coastal, mangrove-dwelling communities in Pakistan pertains to the vulnerability of entire villages to climate change and sea level rise. These works were commissioned by the British Council in partnership with the Pakistan High Commission as part of the festival Pakistan/UK: New Perspective.

The Delhi-based artist stages a recreation of her ongoing series Postcards from Home, in which she photographs artists from both India and Pakistan. The exhibition has been shown across major exhibitions in both countries, including the Lahore Biennial and the Kochi Biennial. It is perhaps the most significant public art project in recent memory to be shown across this contested national border.

Read a comment from the artist detailing her project here.

This group show curated by the Mumbai artist Jitish Kallat includes five rare, handwritten letters that Mahatma Gandhi wrote to Lord Mountbatten in 1947, one day before the Indian Viceroy signed a decree to partition British India into two separate nations. They form the basis of an exhibition around language, violence and national borders, featuring works by Kader Attia, Henri Cartier-Bresson and Zarina, as well as a new installation by Kallat.

Read more on the show here. 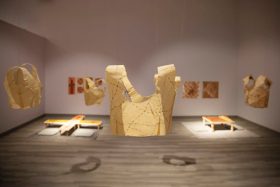 Since 2007, Pritika Chowdhry has been creating a body of “anti-monuments” based on the history of Partition (including the 1971 Partition of East and West Pakistan, forming Bangladesh). A particular focus of Chowdhry’s work are the vast number of accounts of sexual violence and abuduction faced by women during Partition. 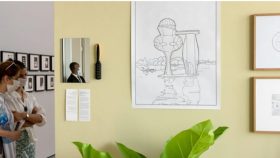 Proposals for a Memorial to Partition, Jameel Centre Dubai, until 23 February 2023

Bani Abidi, Seher Shah and Shilpa Gupta are among the artists who feature in this group exhibition, which consists of 18 proposals for a memorial to the various partitions of the Indian subcontinent. This exhibition is the most complete version of an 11-year project initiated by the curator Murtaza Vali, which he began during the 2012 Sharjah Biennial. He was prompted to do so, he says, because there were so few major memorials to the historical divisions of South Asia in existence at the time.

This exhibition looks at the role of textiles in India’s struggle for independence, weaving a narrative through 200 objects from the collection of the Powerhouse Museum, many of which were acquired in the 19th century. These include block-printed textiles, known as Fustat fragments, believed to have been made in Gujarat in the 1400s, and 19th-century fabrics embellished with iridescent jewel-like beetle wings. Also displayed is a recently acquired fabric installation work by the artist Sangeeta Sandrasegar. What falls From View (2019) features pieces Khadi (handspun cotton cloth) and silk, hand-dyed in Indian indigo and Australian native cherry.