You are here: Home » Articles filed under: 'News' » Article: 'Mary Mulcahy, Dir, TMAG interview on a' 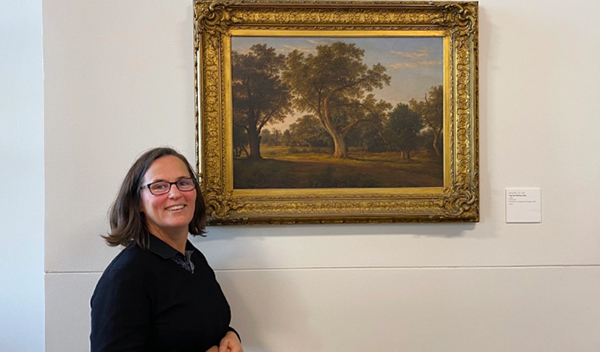 While Mary Mulcahy was not born in Tasmania, she has long called it home. That is why her recent appointment as Director of the Tasmanian Museum and Art Gallery (TMAG) is so welcomed. However, the decision has not been part of the great ‘reshuffle’ delivered by COVID. Rather, it unifies many aspects of her career.

‘I’ve worked as a scientist, but I’ve worked more as a science communicator. I also have a passion for art, so it’s kind of a nice package tied up with a bow,’ she told ArtsHub.

If ever there was testament for the connection of art and science it was Mulcahy’s reaction to a painting in her office when interviewed for the job. ‘I got halfway through the door and it stopped me in my tracks. I just said, “is that what I think it is?” Yeah, it’s a Glover. It’s pretty amazing,’ Mulcahy said of John Glover’s View near Byrkley Lodge (c.1820), which hangs behind her desk.

‘My mother always said to me, he [Glover] obviously just painted trees the way that they’re painted in Europe. But you know, the land was regularly burned and it was managed, and we have seen trees like that grow on their own,’ she continued. ‘It’s interesting those anchors that connect you to why you’re doing what you’re doing.’

TMAG combines a state museum, art gallery and herbarium which houses the State Collection of Tasmania. It collects and conserves material evidence within the areas of humanities – the visual arts, history and anthropology – and the biological and physical sciences.

Mulcahy explained the challenges of getting that balance right: ‘I’ve always looked at museums as really interesting places to work. And the thing about TMAG is that it’s one of those quite unique places because it’s a combination of a museum and an art gallery.’

Just seven weeks in, Mulcahy says she views the top job at TMAG as a ‘stewardship role on behalf of all Tasmanians.’

Mulcahy is of the belief that science can be very creative, ‘particularly that thinking about experiments and investigation’, adding that for her, ‘it’s that bundle TMAG offers, that brings the scientific collections but also the history and the society, packaged together – it’s a really holistic organisation.’

‘Over the years, from when I was a little tiny kid coming here with my mother, right through to when I came back as a visitor, it always seem to be balanced in the representation – in the exhibitions and the content on the floor – to really give that holistic approach a truly Tasmanian experience,’ she added.

It is that authenticity or meaningful experience that Mulcahy plans to nurture during her tenure.

Education is a huge part of Mulcahy’s background, so we quizzed her on her goals for growing the learning experience at TMAG.

‘I’m really interested in the “T” in TMAG, because we’re not the Hobart Museum or that guy with the Hobart museum gallery,’ said Mulcahy. ‘Someone told me, there are like 240 small museums or art galleries in in Tasmania.’

‘Through partnerships and innovative programs, I am interested in how we actually work together to ensure that a Tasmanian story is available to anyone, no matter where they live,’ continued Mulcahy.

‘I guess the thing for me is if we can engage and communicate with people on the Northwest Coast [of Tasmania], and succeed at doing that effectively – and authentically is probably the word I’m going to use – then we could reach anyone in Australia; anyone in the world. I’m interested in doing that, and doing it meaningfully,’ she told ArtsHub.

Shaping a new future for TMAG

TMAG has recently spent a lot of time towards communicating its next Strategic Plan (2021-2024). It was released after the organisation led Australian institutions with an apology to First Nations Tasmanians (February 2021), which significantly fed into and shaped the plan for the institution’s future.

Mulcahy said of the plan for TMAG: ‘The strategic plan’s priorities talk about the crucial role engaged and involved communities will play in the future of the organisation. I think we’re all stakeholders. And I think it’s critical and going to be essential for TMAG’s future.

‘But also thinking in the context of post COVID, and what that means. The government has got a cultural and creative recovery strategy. I think that community engagement is going to be part of that. What can we bring to the table in the conversations that are informed by scientific and cultural knowledge, and I guess planning for future?

‘It’s very constrained by this building, to really have those conversations that resolve that kind of vision, so I’m quite interested in breaking down the walls,’ added Mulcahy.

Mulcahy believes it is not only TMAG’s unique mix but also serendipity that makes for a successful institution.

‘You add serendipity, and that actually allows for those kinds of things that otherwise wouldn’t have been together, and wouldn’t have people with all those different interests coming together.’ Mulcahy spoke of the time when the French expedition for Antarctica became isolated in Hobart, and TMAG working with local schools to connect with them via a postcard project.

‘It’s that human bit. I think there’s a huge opportunity for that role that TMAG could play, in defining its own future by the conversations that come, and those opportunities created [fusing] the social, with the science and the art,’ she said.

Mulcahy said she is also ‘interested in unpacking what that potentially means also around restorative tourism,’ speaking of a program initiated by New Zealand and a number of other countries to ask their visitors and tourists to sign up to act responsibly when visiting, and then share those experiences.

‘That kind of thing is actually about how are you acting when you’re in the country, and what that might mean as a I guest, the experience they choose, the things they buy – how people look for service as a way they give back,’ she continued. ‘It’s a really interesting idea, that community compensation, and renewability. I think there’s a lot of space there for us to tap into the pulse of what people are feeling today in many ways.’

Values for TMAG’s next chapter

Mulcahy says she hates being micromanaged. ‘I don’t like being the captain and making captain’s calls. I’d much rather work with a leadership team,’ she told ArtsHub.

I’m quite interested in this idea of servant leadership as well. I would much rather stand as far back as I can, but then stand right at the front if there’s a problem.

Working in science and education Mulcahy said one of the interesting lessons learned is that, ‘[while] communicating is great, but communicating when it’s appropriate to do so is probably better. Communication can sometimes be quite destructive when it’s too early or too much; it can be destabilising.’

With regard to the movement in staff levels at TMAG, Mulcahy told ArtsHub: ‘It’s always difficult. You know, you’ve got a budget that you’ve got to operate within that, but we still have a healthy number of staff.

‘At the moment we’ve got a few vacancies in the team, so it’s an opportunity for the leadership team to look at that balance, and ask how does this work? And what does that look like in a sustainable model?’

‘The other thing was the way that CSIRO had actually been measuring impact. Like, how are we going to take the research and then translate it into something that’s a benefit to Australia?

We took that thinking and put it into the education team and started looking at how do you evaluate education programs? And it’s difficult because you can’t put a student in a bubble and then have nothing else influence them for their whole lives.

We started to collect evidence about what was working, what wasn’t working, and we learnt a lot. So we’re actually able to say, “Look, I can’t do this, but we can do this.” Those conversations in the start of the relationship actually meant that we were delivering because you can see where the money translated. I’m interested in [exploring] that in the context of a museum.

Who is Mary Mulcahy?

Mulcahy spent her early childhood years in the western central highlands of New Guinea, which seeded an earthy curiosity for the world. That warm casual demeanour is immediately felt when one meets her.

Prior to TMAG she led the stakeholder engagement for the development of the 2021 National Research Infrastructure Roadmap with the Department of Education, Skills and Employment and CSIRO’s response to the Modern Manufacturing Strategy.

She was Director of CSIRO Education and Outreach from 2015–2020, managing a team of over 100 people to deliver (STEM) education and engagement programs for teachers, students and the community. Under her leadership the team underwent a considerable change to its business model, doubled in size, and secured $100M in external funding.

She has also held senior communication roles with CSIRO, the University of Technology Sydney, Questacon in Canberra, and Petrosains in Malaysia. She has worked as a freshwater ecologist, and taught at high schools.