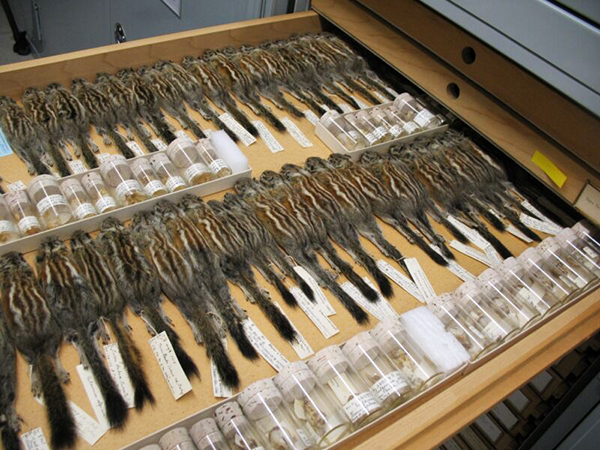 Alpine chipmunks collected by pioneering naturalist Joseph Grinnell in the early 20th century are still preserved at the Museum of Vertebrate Zoology at the University of California, Berkeley. Recently, geneticists used DNA extracted from them to trace how the chipmunks have evolved. Museum collections like this can give researchers at time machine to the past. (CC BY-NC 2.0).

Natural history’s golden age, when Charles Darwin and like-minded scientists pondered connections between creatures and their environments, largely revolved around collecting stuff. Explorers fanned out across the world and picked up as many plants and animals as they could, drying them or stuffing them or storing them in alcohol in small glass jars. They carried them home to grand museums where the public might get a peek at them and be amazed.

These venerable collections can seem like relics today—musty storehouses, shrines to imperial plunder. But with billions of samples catalogued among them, museum collections are a treasure for modern evolutionary biologists studying DNA, RNA, proteins and other biomolecules. Sampling decades- or even centuries-old tissues allows scientists to capture snippets of genetic code from plants and animals—including extinct ones—and track molecular changes that took place long before biologists even understood what DNA was. Younger specimens are valuable too, providing a large sampling to help scientists compare traits within a species or between related ones.

All of this makes working with museum samples a tantalizing prospect for researchers, says Harvard evolutionary geneticist Daren Card, who has sequenced specimens from Australian museums for his own work on limb development in reptiles. Museum genomics is delivering crucial insights into evolutionary history, the effects of climate change and more, Card and colleagues write in the 2021 Annual Review of Genetics. Knowable spoke with Card about some of these projects—and some challenges the field faces.

This conversation has been edited for length and clarity.

So much of what scientists want to know about natural history today is inscribed in DNA, invisible to the human eye. What can these hulking collections of old biological stuff tell us about the interplay between genes and evolution?

Historically, most museum researchers focused on naming species and understanding their evolutionary history. I have more interest in the ties between the genome—the DNA-based code that tells an organism how to build and run itself—and phenotypes, the traits that a creature displays.

By looking at both genomes and phenotypes, we can study how organisms evolve and adapt to different environments, and museum collections give us loads of samples to mine for this work. Museums are a time machine of sorts—you can go back and look at old specimens, and you benefit from the work the museum did to record where the specimen came from, when it was collected, and what observations scientists have made about it over the decades.

For contemporary species, too, specimens in museums can be better than those sampled from the field. There will be circumstances where you’ll have a critter that’s now extinct, or very rare, so no one would reasonably let you do any sampling, because there’s like two left.

The lizards I study are still semi-abundant in natural environments but having access to museums cuts down on effort. I’ve sampled dozens of species using tissue housed in museums in Australia. If those weren’t there, I would have had to go out and find those species. Even if I got to the right spot—and they’re scattered all over the continent—I might never find what I was looking for.

What’s a good example of a scientist using a museum collection to learn something about evolution through genetics?

One really good one, which we highlighted in the review, involves a study of high-altitude chipmunks in California, and how they’ve adapted and evolved over the past 100 years or so. These are rodents whose range is restricted to the highest-altitude mountains in California.

There is concern that species like these face great risk from climate change. If temperatures continue to rise, and they can’t move higher up the mountain to cooler ground, they’re in a tough spot.

The original work with the chipmunks was begun in the early 1900s by researchers at the Museum of Vertebrate Zoology at the University of California, Berkeley, and especially a gentleman named Joseph Grinnell, who was a very influential museum scientist of the day. He was prolific in documenting the natural history of the West, which was being heavily settled at the time.

Grinnell died in 1939, but he was prescient, and he speculated that future scientists would use museum collections to study biological change over time. That inspired one of our coauthors on this review, Craig Moritz, to organize a team to resample and sequence some of the high-altitude populations of this chipmunk, and contrast what they found with DNA samples extracted from the animals Grinnell’s team collected and catalogued 100 years ago or so. Moritz wanted to see if they could detect genetic changes that would suggest how climate was impacting these organisms.

Across most parts of the genome, nothing changed that much. But they found that some individual genetic mutations in these high-altitude locations had become more common over time in some populations, presumably due to the ecological pressure from climate change.

They saw big shifts among five variants of a gene called Alox15, which is known to regulate animals’ ability to survive in low-oxygen environments. So perhaps Alox15 is an important gene to track as the climate changes. Ideally, scientists will now validate its function. In the near future, they might track Alox15 variants to inform conservation decisions that will benefit the chipmunks and other high-altitude species. Perhaps 50 years down the road, we’ll be able to use genetic editing to fiddle with Alox15 and make threatened organisms more resilient. But that’s pie in the sky at this point.

What are some other discoveries scientists have made using museum specimens?

There are many examples. One is an analysis of samples from the Finnish Museum of Natural History that revealed century-long declines in genetic diversity in two butterfly species due to population decline. Another study found that genetic diversity remained mostly unchanged between 1879 and 1959 for honeybees in Bern, Switzerland. This points to a different kind of human influence: In this case, apiculture practices probably helped the bees out.

Genomic analysis of blood samples from deer mice preserved at the Museum of Southwestern Biology at the University of New Mexico and the Museum of Texas Tech University helped scientists figure out that a mysterious hantavirus that killed 10 people in the Four Corners region of the American Southwest in 1993 had been circulating among rodents in the region for some time, undetected.

And a really cool study recently came out in Nature, where researchers affiliated with the Swedish Museum of Natural History and other institutions isolated and sequenced DNA from million-year-old mammoth samples, identifying a previously unknown lineage of Siberian mammoths that was an ancestor of the first mammoths to colonize North America over the Bering land bridge. This kind of work helps us understand intimately the relationships between different populations of ancient animals.

You can pull good molecular information out of something that old?

It’s hit or miss. It depends on the preservation method—the best is to take a hunk of tissue and throw it in a freezer or a vat of liquid nitrogen. Time is a factor as well. The longer something sits there, the more degraded it gets.

Obviously, 100 years ago we didn’t know what DNA does, or how it does it. The structure and the nature of the code weren’t discovered until the 1950s and 1960s. People like Grinnell were flying blind, but they generally preserved things in ways that let us go back to them today and try to get usable DNA out of them. Other biomolecules are coming online too, slowly.

There is some coordinated effort to standardize the way samples are preserved, but probably not as much as there should be. I think we need an overhaul. We could do a lot better in preserving tissues for longer sorts of studies.

What are some of the other challenges facing the field?

We need to do a better job deciding what to save, and how to record important attributes. Museums always used to preserve a full body specimen, but lately we’re more interested in these genomic or genetic resources, so tissue samples are the thing. But when you go to databases, it can be difficult to tell whether a collected specimen, for which you have a date, and a location, and other information, has associated tissue that you might be able to sample. For genomics, it’s useful to have both.

What has museum genomics showed you about the lizards you’re studying?

We’re still working out why reptile species evolve to lose limbs. It’s happened at least a couple dozen times. Snakes are the most famous examples, of course, but it happens a lot more than I think a lot of people realize. Historically, there’s been one region in the genome that’s been implicated in driving the loss of limbs within snakes, the ZRS region. But preliminary looks I’ve done, including examining specimens from museums, suggest that this region isn’t as important in the species I’m looking at. Something else must be driving the pattern.

Why is it important to understand what region of the genome is involved in this kind of evolutionary change?

For a biologist, it’s critical. What makes a snake a snake? What makes a bird a bird? Most of the variation we’re interested in as biologists has to be driven by genetics in some way. We’re really at the beginning stages of understanding any of this at all. We’ve done a decent job in some model organisms, like humans and mice and fruit flies, but for most biodiversity, we have no idea.

Museums will be a great source of inspiration and material for examining that big question in biology, and understanding the big question could help us solve big problems. Understanding genetic variation and the ways it correlates to physiology—especially in organisms you might be able to relate back to humans—could have ramifications for health care, or for biologically inspired design and engineering.