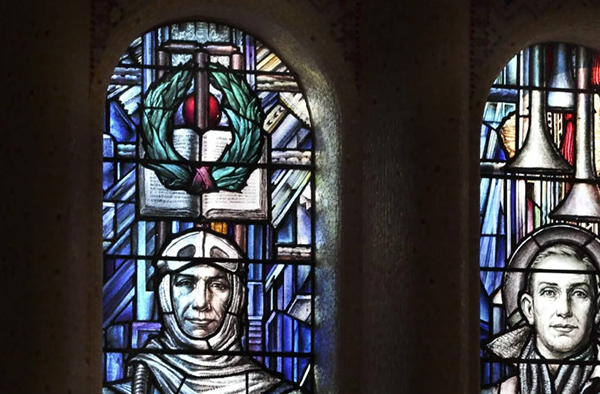 When the 2022 Napier Waller Art Prize winner is announced at Parliament House on June 23, many may wonder who Napier Waller was, but with the publication of Jan William Smith’s new book, “The Glass Cricket Ball”, that question is well and truly answered.

What may be less well known is that, after his right arm was amputated in France, Waller immediately learnt to write and draw with his left hand, saying: “I think a man could learn to paint with his feet if he had the determination to keep at it and the pleasure to express himself.”

The official report declared him to have “suffered total incapacity… permanently unfit for service”, but as Smith observes, he would go home to paint the biggest picture of his life.

Before leaving for World War I he had already married his classmate at the Victorian National Gallery’s art school, Christian Yandell, a theosophist and spiritualist who casts a shadowy figure in the book. 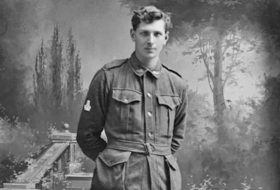 Mervyn Napier Waller in a studio pose in France during World War I. Photo: AWM.

Waller returned to Australia to build a house with her in suburban Ivanhoe, where the couple became the centre of the “modern” visual arts community.

Author Smith, a former journalist with the ABC and interstate daily newspapers, first became interested in the story of Waller while he was a voluntary guide at the War Memorial.

Among the principals in Smith’s dramatis personae are Charles Bean the historian, William Leslie Bowles the sculptor, whose original artwork was thwarted by ministerial skulduggery and, above all, John Linton Treloar, the canny and money-wise, long-time director of the AWM.

“I have imagined a meeting with Treloar at Waller’s home,” Smith says, “authenticity is one thing, but since we can’t always get that, I’ve had to make it up, though I do know that Treloar visited him at Ivanhoe.”