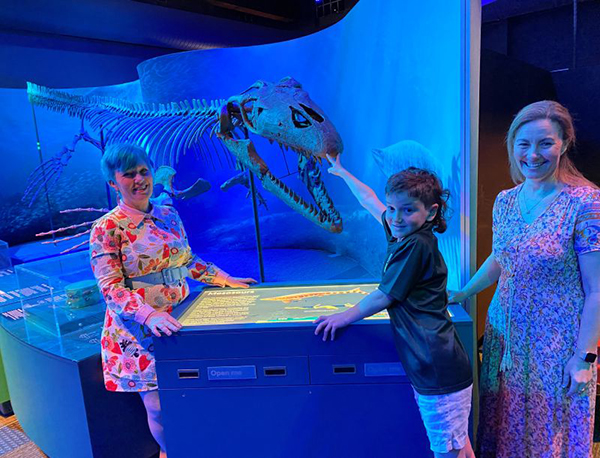 Newcastle Museum’s largest ever exhibition will showcase the terrifying creatures that ruled the oceans during the time of the dinosaurs.

Designed for visitors of all ages, Sea Monsters: Prehistoric Ocean Predators is an immersive exhibition that features hands-on installations alongside real fossils from millions of years ago.

Gigantic life-sized replicas, including a 13-metre long Elasmosaurus and 9-metre Prognathdon, will demonstrate the sheer scale of these ancient marine reptiles alongside other incredible specimens including a huge 1.4 metre Kronosaurus jaw and a five-metre long fish that died after swallowing another fish whole.

“Now open in time for the upcoming school holidays, Sea Monsters gives visitors the chance to learn more about the giant prehistoric sharks and reptiles that hunted the depths of the oceans at a time when the land was ruled by the might of the dinosaurs,” Cr Winney-Baartz said.

“This fun and educational exhibition is perfect for the whole family to enjoy as they walk through the giant ribcage of a sea monster, reach out and touch a replica of a fossilised Megalodon tooth and feel the thrill of the hunt with a 180-degree immersive video that puts you right inside the action.”

Newcastle Museum Director Julie Baird said it was a real coup for City of Newcastle to host this significant exhibition, which has taken a team of 10 staff from the Newcastle Museum and Australian National Maritime Museum two weeks to install.

“This is the largest exhibition ever hosted by Newcastle Museum, as well as being the first time Sea Monsters has been displayed in Australia outside a capital city.

“Newcastle Museum plays a key role in the rich diversity of experiences that help attract visitors to our city and we’re thrilled to be able to share exhibitions of the calibre of Sea Monsters with our community.”