A tribute to a lifetime of service by Her Majesty Queen Elizabeth II, the longest reigning monarch in British history.

Born on 21 April 1926 to the Duke and Duchess of York (later King George VI and Queen Elizabeth), as third in line to the throne, Princess Elizabeth was not expected to become Monarch. It was the abdication of her uncle King Edward VIII in 1936 and the ascent of her father King George VI that catapulted her into the public eye and a life of service.

She enjoyed a happy childhood together with her younger sister, Princess Margaret, with newsreels capturing them playing in the grounds of Buckingham Palace.

After the outbreak of war, Princess Elizabeth made her first radio broadcast in 1940, during the BBC’s Children’s Hour. She addressed and empathised with child evacuees across the world. It was the first of many public addresses to the United Kingdom and abroad.

Like so many of her generation, Princess Elizabeth served in the Second World War. She trained in the Auxiliary Territorial Service as a driver, an unprecedented decision which made her the first woman in the Royal Family to become a full-time member of the armed services. 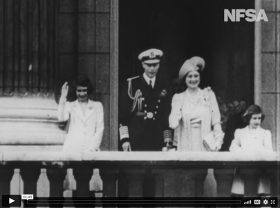 A PROMISE TO A LIFE OF SERVICE

In this clip from the 1947 film Heir to the Throne, Princess Elizabeth broadcast her most famous pledge, which was fulfilled throughout her 70-year reign: ‘I declare before you all that my whole life, whether it be long or short, shall be devoted to your service and the service of our great imperial family to which we all belong.’ The Queen kept this promise tenfold. During her reign, she was patron of more than 600 organisations and charities, attended thousands of official engagements and toured every country in the Commonwealth. 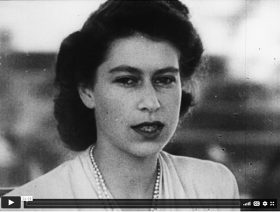 On 20 November 1947 Princess Elizabeth married her husband Prince Philip at Westminster Abbey. It was a love match, and they were married for 73 years, separated only by Prince Philip’s death in 2021. Their first child, Prince Charles (now King Charles III) was born in 1948, followed by Princess Anne (1950), Prince Andrew (1960), and Prince Edward (1964). Her personal family home movies depict an intimate look at family life and were recently shared in the documentary Elizabeth: The Unseen Queen (2022).

ASCENT TO THE THRONE 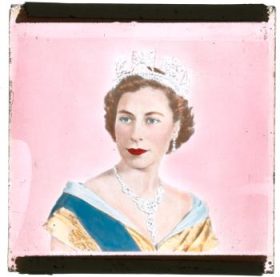 Following the premature death of her father King George VI on 6 February 1952, Princess Elizabeth ascended the throne while abroad in Kenya with her husband Prince Philip.

In her first official portraits taken by society photographer Dorothy Wilding, the Queen was presented as elegant and refined, yet fresh and youthful, a fitting monarch for a post-war age. This glass cinema slide was shown prior to film screenings and was one of the many ways the Queen made her image accessible to her subjects across the Commonwealth.

A CORONATION UNLIKE ANY OTHER

After a period of mourning and months of preparation, the Queen was crowned on 2 June 1953 at Westminster Abbey in a solemn yet ornate ceremony. At her insistence, the coronation was televised for first time, with an estimated global audience of 277 million. While television had not yet been launched in Australia, royal watchers flocked to cinemas to view full length films and newsreels of the event such as Elizabeth is Queen (1953).

From an early age the Queen found a personal style and adhered to it throughout her life, becoming a sartorial model for generations of women. Her signature look was developed in consultation with her couturiers to blend symbolic elements referencing the occasion and paying homage to a particular country if she was touring. The consistent approach was to clothe the Queen, usually with a coat, in an outfit and scrupulously matching hat in a block colour – a ‘singing’ colour that would mean she was visible wherever she went amidst the crowds.

In 1954 Queen Elizabeth and her husband Prince Philip made their first tour of Australia. She was the first reigning monarch to visit. Crowds gathered throughout her extensive two-month tour, and it was estimated that more than seven million Australians, or approximately 70 percent of the population turned out to see the young Queen.

This tour was recorded in the documentary The Queen in Australia (1954), the first feature documentary made in colour in Australia. Her interest and commitment to Australia was shown through 15 subsequent visits, her last in 2011. These royal tours, and those undertaken by her children and grandchildren, have been captured on home movies, newsreels, radio and television news broadcasts, and full-length feature films.

While the Queen’s life was filled with celebrations, most recently her Platinum Jubilee, her reign was not without its challenges. She referred to 1992 as her Annus Horribilis, a year marked by the dissolution of three of her children’s marriages, together with the devastating fire which destroyed part of Windsor Castle. The Queen witnessed some of the 20th and 21st century’s biggest moments in her 96 years: wars and conflict, changing political leaders, and most recently the COVID-19 pandemic.

As one of the most visible individuals of the 20th and 21st centuries, the Queen embraced new technologies and methods of communication with her subjects. Every year of her reign the Queen delivered a popular Christmas Message. Her first was broadcast on radio in 1952, and from 1957 onwards, via television. For many families this was a meaningful part of Christmas rituals.

Various periods of her life have been dramatised on film and television series including: The King’s Speech (2010), Royal Night Out (2015), The Queen (2006) and the popular series The Crown (2016-present) in which the NFSA provided archival footage of her 1954 Australian tour.

The Queen was a much loved and widely respected figure across the globe. Through her work she met individuals from all walks of life, from world leaders to school children. A steadfast figurehead for the United Kingdom and the Commonwealth during times of enormous social change, the Queen will be remembered for her strong sense of duty, and devotion to a life of service.