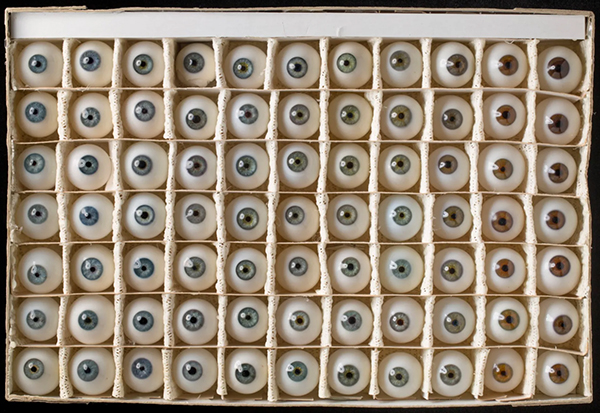 When ocularist Paul McClarin died, the art of glass eye making went with him.

Paul McClarin knew how important the eyes were to a person’s identity.

“For Paul, making glass eyes really was about restoring people’s sense of self and dignity.”

Dr Sophie Jensen is a senior curator at the National Museum of Australia (NMA). She was fortunate enough to meet Paul when acquiring samples of his work for the museum’s collection.

“He was amazing to interact and work with,” she says. “Hearing someone talk with that kind of dedication and passion for perfection was amazing.” 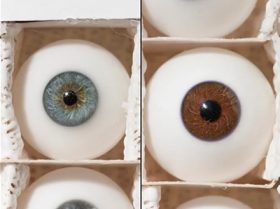 When Paul McClarin immigrated to Australia with his young family in 1978, he took up a job at The University of Adelaide as a scientific glass blower, a specialist craft he had learned in his home country of Ireland, making scientific instruments from glass.

His introduction to glass eye making came via a chance encounter on his way to work one day.

“He met a man on the train who had an artificial eye,” recalls Paul’s wife, Margaret. “After chatting, he invited Paul to meet Mr Scheler.”

Mr Erwin Scheler was a German-born glass eye maker living and working in Adelaide. While the trade was extremely rare in Australia, throughout Germany and other parts of Europe, it was a prolific industry.

Watching Scheler work, Paul had “an immediate calling,” says Sophie. “He wanted to be able to learn this skill himself.

“He managed to secure a small amount of the specialist glass from Mr Scheler that day and having already developed highly specialist skills with glass himself, he went away and had a play.”

The rest, as they say, is history.

(L) Erwin Scheler photographed for an Adelaide newspaper in 1954. Image credit: National Library of Australia, and (R) Part of a collection of glass eyes made by Scheler in the 1930s. Image credit: South Australian Medical Heritage Society, supplied by Paul McLarin.

Paul spent a decade of intense learning under Scheler, who then, sadly, passed away. Still feeling he needed further training, Paul took a series of trips back to Scheler’s home town of Lauscha, where he honed his skills with the help of a thriving community of ocularists, including some of the world’s best.

“It was an incredibly long training process,” says Sophie. “But it wasn’t just a trade or craft for Paul, he was driven by a genuine feeling that this was what he was meant to do with his life.“

Paul was still making glass eyes when he died, aged 64, in 2011. He is remembered as one of the best in his field.

“Paul was a perfectionist. Of course, that’s why he married me,” says his wife, Margaret, with a laugh and cheeky glint in her eye.

Being a perfectionist was crucial to Paul’s success. The level of precision needed to craft glass eyes, and the intricacies of design and production, is exceptional.

As Margaret details the process it becomes obvious she herself was also highly invested in Paul’s work, able to explain the different stages of production, providing an insight into the remarkable artistry of glass eye creation.

“You can’t make one small mistake,” she says. “There are no fixes or ways to cover anything up, you need to start again.”

She goes on to describe how the eye begins as a glass sphere before just one section is made to fit the precise measurements of the recipient’s eye socket.

“Creating the colour of the iris was a five-stage process in itself, made up of twisted glass rods of different shades of colour,” Margaret explains.

“Also, the colour of the glass is different when hot and cold. Paul knew what colour the glass would eventually become.”

Getting the pupil exactly in the middle of the eye was also a massive feat, Margaret says. 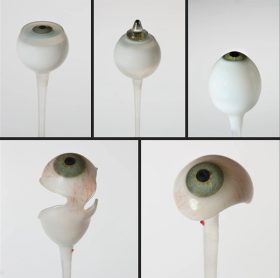 The different stages in the making of a glass eye. Image credit: National Museum of Australia, provided by Paul McClarin.

For Sophie, watching Paul add the final touch to the eyes – the tiny blood veins – was fascinating. Without these, a glass eye could never look realistic.

These were created by carefully dangling strings of fine red-coloured glass – thinner than a strand of hair – over the white of the eye.

“It has to be perfect. People are looking right at it, into it,” says Sophie. “The skill required in producing something of that quality, that’s going to be so closely examined, is remarkable.”

“The fact that he was able to so closely examine a person’s eye and then replicate such a complex structure was kind of unbelievable to watch. And to see it happening at speed, to watch someone with those skills, it was just incredible.”