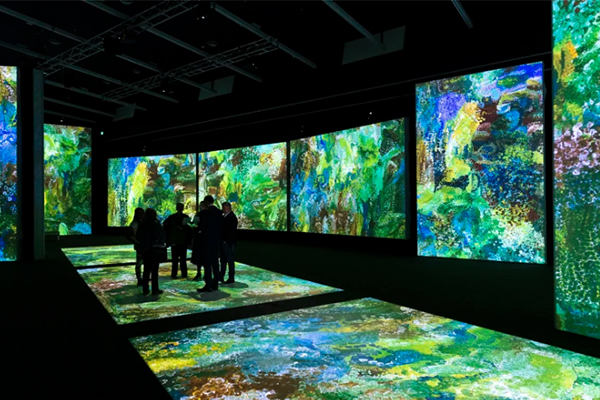 The Australian digital art company that created Van Gogh Alive – and turned Monet’s lilies into something visitors could stand on – has transformed Australia’s own Indigenous grand masters’ art and music into an immersive experience.

Premiering on Wednesday at the National Museum of Australia in Canberra, Connection: Songlines from Australia’s First Peoples, brings to life Indigenous stories, culture and art. It will tour Paris, London and New York and other cities in future.

Australia’s Indigenous art tradition is 50,000 years old, with rock paintings which predate those of bison and mammoths of France’s Lascaux caves by 35,000 years.

It is accompanied by the music of William Barton, Yothu Yindi, Gurrumul, Emily Wurramara, Baker Boy (Danzal James Baker) and Archie Roach as well as the smells and sounds of the Australian bush.

Sarrita King, a Darwin artist whose image of lightning is included in the exhibition, said the music and art would “sing to everyone’s soul”. 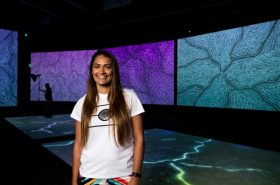 Gurindji and Waanyi artist Sarrita King, whose image of lightning is included in the exhibition. Credit: Rhett Wyman.

“It doesn’t matter where you come from,” said King, a Gurindji and Waanyi woman. “The most amazing thing is about this touring internationally is that you will feel the Australian spirit just sing to you. ”

King could imagine her three- and five-year-old children going wild, rolling in the projections on the ground. 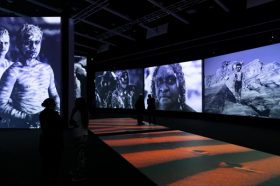 “I am so excited to bring them here because this is art they want to engage in, this is the art that they will no doubt run about in, to delight in … to be able to see and feel the culture rush through their bodies.

“It brings art to the viewer in a way that you can’t help but feel connected,” said King.

The show was curated and produced by Grande Experiences, the company started by Canberra born Bruce Peterson, with a team of Indigenous art experts.

Peterson said he had been developing the show for two years.

“I’ve been dealing with the greatest artists that people across the world know, the Leonardo da Vincis, the Van Goghs, the Manets and now the French impressionists,” he said. “But what is close to us as an Australian company is that these are our master artists, and this is a chance for all Australians to see that extraordinary art and culture of First Nations in a way that exposes more people.”

Profits from the National Museum showing of Connection would be returned to the gallery to fund expansion of its Indigenous arts scholarships.

Peterson said on Tuesday that he started the company after discovering that even the great masters of Italy couldn’t keep the attention of children or adults for long.

“My kids would give me a tug on the hip within five minutes to say, ‘this is boring. Can we go now, Dad?’” he said. “I was wandering around the centre of world culture, and they were not engaged … Quite a lot of adults were not quite engaging either. ”

The National Museum’s lead Indigenous curator, Margo Ngawa Neale, said there was no better way to bring songlines’ stories alive than through “this awe-inspiring multisensory display”.

The exhibition’s use of digital technology was more closely aligned with Indigenous culture and art, and ways of knowing and being, than traditional displays of art on gallery walls, she said.

“It isn’t new for us as Aboriginal people to take on and adapt with alacrity to new technologies. It is how we survived for millennia,” said Neale.