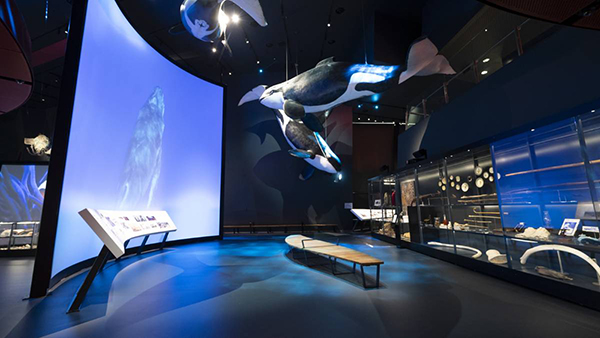 Karen Hardy, The National Museum of Australia’s new gallery is all about our environmental connection to this Great Southern Land, The Canberra Times, September 14 2022

How do you tell a millennia-old love story in 2000 objects? What’s important, what’s at the heart of the story? Do you focus on the triumphs, the joys? Do you acknowledge the darkest moments, things which have almost torn the story apart? Surely you have to note how that relationship has changed over time, for better and for worse?

These are all questions the National Museum of Australia pondered when it was developing the new Great Southern Land gallery.

At a cost of $25 million, it’s the most significant redevelopment since the institution opened its doors in 2001. A level of the museum is almost unrecognisable, the 2000-square-metre gallery features new mezzanines, a staircase has been added to the outside of the building featuring striking red glass, the area as vast as Australia itself.

And that’s the love story, an exploration of the relationship people have had with this unique continent for more than 65,000 years, from the First Nations peoples, and everyone who followed. 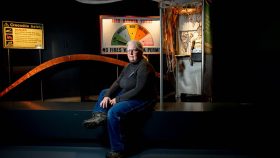 “The museum is charged with telling the story of Australia,” she says. “This has been a huge project, in so many ways, starting with the idea of the relationship between people and the land.

“Where does the story start? In that connection between First Nations peoples and all the really diverse eco-systems and communities of life in this astonishingly huge and diverse continent.

“And it carries on through all of those relationships and connections and memories that we all have, places we love and that matter to us.”

You enter the gallery through a forest of bunya trees, trunks soaring 7.5m to the ceiling, cast from living trees in the forests of south-east Queensland. Mirrors line the walls, creating an infinity effect, suddenly you’re lost in an endless forest. 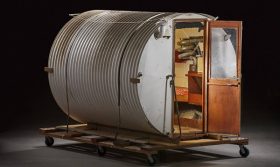 From here, there are four different chapters to the story.

“Power” examines the natural forces which have shaped life in Australia. There’s a steel electricity pole, bent and twisted by the ferocious winds of Cyclone Tracy on Christmas morning, 1974. Closer to home, there’s a melted phone box from the main street of Cobargo, destroyed by the 2020 bushfires, the plastic drips like thread, almost ghostly.

“The phone booth captures what the community went through in a few ways,” says Dr Sear. “From the destruction, to the idea of the loss of communication that happened there, the feeling of being cut off from the outside world, being unable to call for help.”

“Connection” revels in the country’s seasonal rhythms and we are all connected with these systems.

The life-sized models of orcas will be popular, they hang from the roof as video footage plays of whales swimming in the ocean, sounds of whale call echoing. 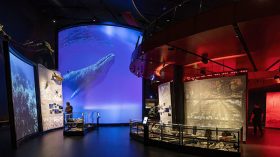 “The story of the orcas is one of the most amazing stories of connection between humans and animals on the planet,” says Dr Sear. “The Yuin people on the south coast of what we now call New South Wales, forged a bond with the orcas, who they saw as ancestral spirits and beings, worked with the orcas to hunt other whales, baleen whales like the humpbacks, to drive them onto the beach and that gave a meal for both the people and the orca.

“When the European whalers arrived in Two Fold Bay in the mid-1800s they listened to the stories and worked with the Yuin people. They’d wait for an orca they called Old Tom, who’d come into the whaling station and splash his tailfin on the water to wake up the whalers and they’d head out in their long boats. 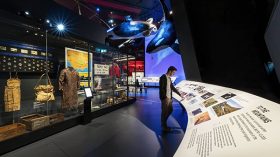 There are more than 2000 items in the gallery. Picture supplied.

Dr Sear says it’s often big things, such as the orcas, which are the most popular in galleries. (Look out for a 4.5-metre taxidermy saltwater crocodile and a life-sized sculpture of a massive cathedral termite mound.) But sometimes the smallest exhibits can also tell a huge story, she says. In the shadow of the orcas is a display of bogong moths.

“Every Canberran, every high-country person, knows the time of year when the big clouds of bogongs arrive and start gathering around the local lamp post or Parliament House. They represent the biggest input of energy into the Snowy Mountains, outside [of] the sun. They are feed for animals like the pygmy possums. For at least 10,000 years the Aboriginal people from all around the Monaro would gather and feast on the moths, have a great festival all based around the movement of the moth. It’s a huge natural story, a huge cultural story, and it all boils down to these little brown moths.” 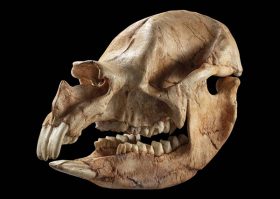 In the chapter entitled “Life”, which explores Australia’s unique biodiversity, from the red centre to the reef, the smaller things shine as well. Delicate displays of pressed flowers, small gemstones, tiny gold nuggets sit beside large-scale film projections, documenting the majesty of Uluru, while small screens live-stream the conditions at beaches from Bondi to Scarborough.

At the same time the gallery is not all about the past. The final chapter, “Change”, investigates how Australia has been transformed and adapted over time and looks for answers as to how we can continue to learn, grow and prosper in the face of rapid and dramatic global environmental change. There’s a sense of optimism to it all, a sense of how all we’ve been through has shaped how we feel about our nation, how proud we are of this Great Southern Land, and our love for it.

At the end of the gallery walkthrough there’s an exhibit that enables the audience to search for a particular place they love. An interactive map lets you zoom in on any spot in Australia, a favourite beach, the family home, a significant site. These spots can then be captured and added to a display. It’s a personal touch.

It’s almost impossible, if only for people of a certain generation perhaps, to not hear the sounds of the iconic Icehouse song Great Southern Land, running as the background track to this exhibition.

So you look into the land and it will tell you a story; Story ’bout a journey ended long ago

(Iva Davies will perform the song at the official launch on September 15.)

In this gallery’s vastness, there is a connection on many, many levels.

“Part of this is about showing people, telling those stories, about things people will find familiar, things which trigger memories and associations and connections,” says Dr Sear. “But the other part of it is taking people on a journey to places that they’ve never been before, helping them understand experiences that they’ve never had.

“It’s all about creating new memories, creating conversations where people might go home and say to each other, I’m proud to be Australian.”