July 16th, 2022 | Browse other: News. | Tagged with: Copies of the Parthenon Marbles—carved by a robot—to go on show in London | 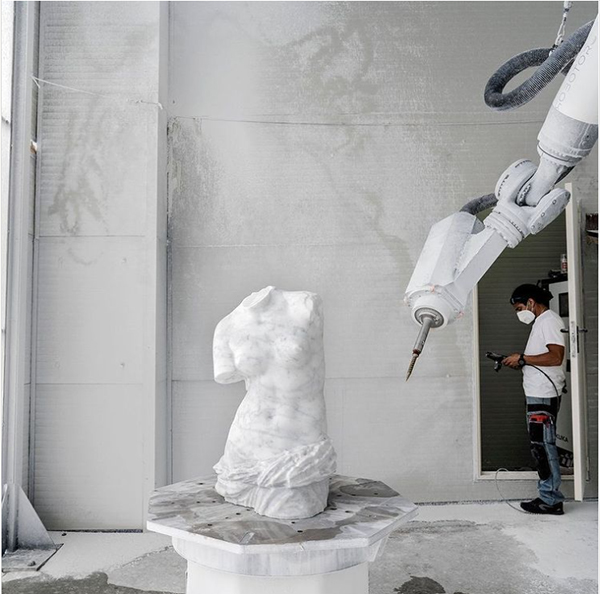 Gareth Harris, Copies of the Parthenon Marbles—carved by a robot—to go on show in London, The Art Newspaper, 13 July 2022

The Oxford-based Institute for Digital Archaeology has created a copy of Parthenon Marbles pieces housed at the British Museum (BM) in London, which will go on show later this month. In June, a robot designed by the Institute—which can create faithful reproductions of large-scale historical object—began carving a detailed copy of one of the BM’s Parthenon Marbles at a workshop in Carrara, Italy, according to The New York Times.

The piece created was a life-sized head of a horse; another work, a sculpted panel, was also replicated by the robot (a 3D machining device). Roger Michel, the executive director of the Institute of Digital Archaeology, said that both models will be completed by the end of July and exhibited at an as yet undisclosed location in London.

The move raises further questions about the role of replicas and whether duplicates could replace the real thing in museum collections. “Copies like this will allow the BM to fulfil, indeed, significantly expand, its educational mission, while promoting ethical stewardship of important heritage objects,” says the Institute website. Michel told The New York Times: “Our sole purpose is to encourage repatriation of the [Parthenon] Marbles. When two people want the same cake, baking a second, identical cake is one obvious solution.”

In March, Michel and his team hoped to scan a piece from the Parthenon Marbles collection on show at the British Museum but officials at the institution refused the formal request. Michel said that he intended to serve an injunction against the museum but scanned part of the Marbles anyway at the museum using an “iPad on steroids” fitted with highly sophisticated Lidar sensors that aid the creation of 3D works. 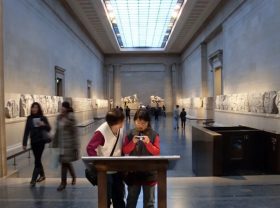 The Parthenon Marbles gallery at the British Museum. Photo: moorina.

The museum subsequently issued a statement saying: “The British Museum was deeply concerned to hear suggestions that unauthorised scanning took place in our galleries. Any such activity would be a breach of our visitor regulations. We regularly receive requests to scan the collection from a wide range of private organisations… and it is not possible to routinely accommodate all of these.”

In 2016, the Institute for Digital Archaeology unveiled life-sized replicas of a 2,000-year-old Roman arch from Palmyra in London’s Trafalgar Square and New York’s Times Square to mark World Heritage Week. “[The Italian company] Torart/Robotor is our longtime collaborator on our reconstruction projects, including the Palmyra arch. They designed and constructed the robotic carving devices,” Michel says.