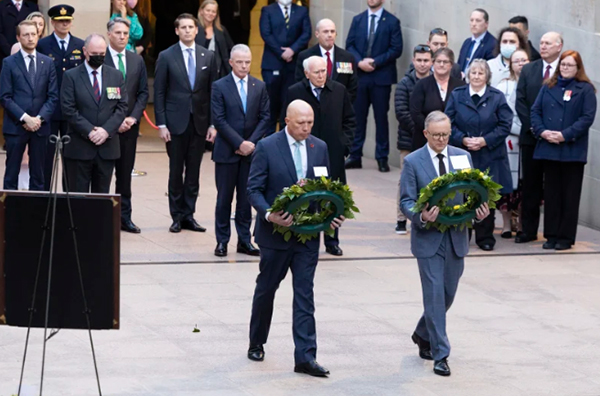 Tony Wright, A new prime minister, on eve of a new parliament, summons hope in silence, The Age, 25 July 2022

Anthony Albanese, on the eve of his first day in the Australian parliament as prime minister, spoke of the power of silence, and the need to listen for it and never to forget the depth of it.

He was speaking at the solemn event that precedes the opening of every federal parliament: the sounding of the Last Post at the Australian War Memorial.

With the resumption of political combat still a day away across Canberra’s lake in the big, often raucous House on the hill, Albanese took care at the ceremony to celebrate the lives of both a Liberal and a Labor man who suffered in war.

“Giants”, he said of his own mentor and father figure, the long-time Labor MP and peace activist Tom Uren, and one of the most significant post-war Liberal figures, Sir John Carrick.

Both endured years as prisoners of the Japanese during World War II, and both were used as slaves on the Burma-Thai railway.

Both, when the war was done, vowed to pursue lives free of hate and bitterness.

“Two great Australians who, even amid the deprivation of prisoner of war camps, managed to encapsulate what is best about our national character: that our deepest instinct is to respond to the worst of times by being our best,” the prime minister said.

Earlier, addressing the first gathering of his government’s MPs in the Labor caucus room, Albanese had on his mind other post-war and longer-term history.

“This is the fourth time since World War II and the fifth time in 100 years that Labor has formed government from opposition,” he said.

“We have a great responsibility to those people to really be the best government that we can possibly be and to make them proud.” 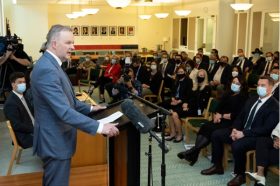 Anthony Albanese addressed the caucus, who cheered through the masks the new leader had asked them to wear.

And having taken a swipe at the former prime minister, Scott Morrison, for “breaching all principles and breaching everything that is decent” by trying to force public servants to politicise the arrival of an asylum seeker boat on election day, Albanese declared that “our task is very different”.

“Our task is to unite people, look for common ground and common purpose.”

The caucus cheered through the masks that the new leader, only days before, had asked them to wear.

Two hours later at the War Memorial, Albanese was finding hope in silence.

He spoke of the silence that followed the last bullets fired in the calamities of the First World War and World War II.

The war historian Charles Bean wrote of the eerie quiet that settled on the Western Front at the end of the First World War: ‘The sound of guns ceased – the gates of the future silently opened’.

“But as those who survived the War to End All Wars soon learned: victory in war offers no guarantee of the victory of peace,” Albanese said.

“Another war came. Another generation of Australians went. And at the end of it, another silence.”

And yet, said Albanese, “each time we honour our fallen with silence, it is a silence that also contains within it the hope that humanity has at last learnt its lesson,” he said.

“The hope that this will never happen again.

“Hope, it must be said, is playing a long game. And hope may yet win out.

“But we will keep returning to this silence.

“This solemn quiet that holds both endings and beginnings.

“It is a silence I hope that our courageous, suffering friends in Ukraine will also soon know.”

And a new prime minister, ritual done, prepared to lead his troops into a place where sound and fury reigns on a day the new parliament will be announced by cannon fire on the lawns.