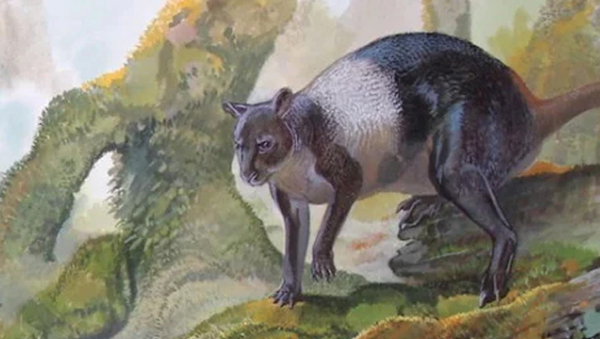 The kangaroo is from a primitive genus that evolved before the modern kangaroos we find in Australia. (Supplied: Flinders University/Peter Schouten).

A primitive kangaroo has been classified as a new species, after re-analysis of fossil jawbones and teeth found in the remote highlands of Papua New Guinea in the 1970s.

The extinct animal is believed to have been a rainforest browser, descended from a primitive genus that migrated from Australia to New Guinea between 5 and 8 million years ago.

That’s according to the results of a study published today in Transactions of the Royal Society of South Australia.

The fossils were originally discovered on an expedition led by archaeologist Mary-Jane Mountain in the 1970s.

They were then classified in 1983 — by palaeontologist and PhD student at the time Tim Flannery — as belonging to a species in the genus Protemnodon.

Protemnodon is a genus of extinct megafauna that lived in Australia and New Guinea.

The last species in the genus is thought to have gone extinct in Australia about 42,000 years ago, and was a cousin of modern-day eastern grey and red kangaroos. 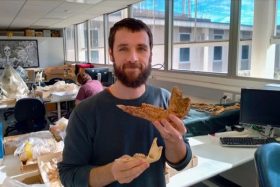 But researchers from Flinders University reclassified the PNG fossils as belonging to a new genus of kangaroo, after analysing 3D scans they took of the jawbones and teeth, located in the Papua New Guinea National Museum and Art Gallery.

Based on some very unique features of the teeth and jaw, the researchers propose that the kangaroo now be known as Nombe nombe — after the Nombe rockshelter in PNG’s Simbu Province where it was found, according to study lead author, PhD candidate Isaac Kerr from Flinders University.

“In the case of the Nombe, they’ve got these funny curved lophids or crests on the molars, which show they were doing something quite different from what the Protemnodon were doing,” Mr Kerr said.

“There were [features] that you don’t get in the more derived kangaroos like the grey and the red.” 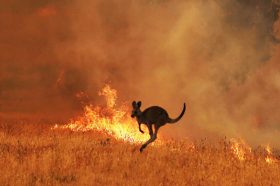 Kangaroos originated in Australia, and are thought to have moved into New Guinea when the landmasses were periodically joined across what is now the Torres Strait, according to the Australian Museum’s group manager of terrestrial vertebrates, Mark Eldridge.

“The centre of radiation for kangaroos is Australia, the oldest fossils all come from Australia, and the greatest diversity of kangaroos is still in Australia,” said Dr Eldridge, who was not involved in the study.

“As the continent drifted north and New Guinea got pushed up as a landmass, a lot of the fauna in Australia spread into New Guinea.”

Often it’s only fragments of skeletons that taxonomists have to work with when trying to figure out the identity of a species, Dr Eldridge said.

“In palaeontology, jaws and teeth in particular are very robust and don’t break down easily, so they’re often what survives.”

How are fossils removed from rock?

Fossils are broken out of their rocky tomb and cleaned up for display and scientific research at the Melbourne Museum.

The most recent fossils of Nombe nombe that have so far been discovered show it may have persisted in the highlands of New Guinea until at least 20,000 years ago.

With only a partial skeleton to go on, what it actually looked like is still up for debate, but there are some things the researchers are quite certain of, according to Mr Kerr.

“It probably hopped, but not very efficiently,” he said.

“[And] we can say that it’s got quite an odd, muscular, robust jaw and pretty unique teeth.”

The species is estimated to have grown to between 40 and 50 kilograms. 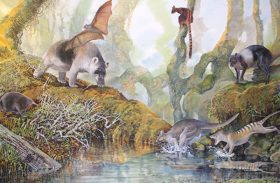 Papua New Guinea and Australia shared a lot of common fauna, and were once connected via a land bridge across the Torres Strait. (Supplied: Flinders University/Peter Schouten).

The researchers have also tried to place the animal on the kangaroo phylogenetic tree, Mr Kerr said.

“We’ve also done the first [analysis] of its evolution, which shows it’s a much more primitive kangaroo — an older lineage in common with more basal kangaroos,” he said.

“We found that it doesn’t have any modern close relatives because it evolved so long ago.”

Palaeontologist Gilbert Price from the University of Queensland said it was important to remember that taxonomic classification was always a hypothesis, and there was always room for testing and refinement.

“Protemnodon [has] about nine or 10 species, [but] they’ve actually only compared [the Nombe nombe jaw bone] to one species in that group when they did the full family tree analysis,” Dr Price said.

“Ideally, if you’re going to say this thing is no longer part of that group, you’d probably want to extend that analysis.”

Want more science — plus health, environment, tech and more? Subscribe to our channel.

However, he praised the authors for publishing the hypothesis so it can be debated.

“That’s the thing about taxonomy — they’re literally hypotheses, and hypotheses are testable; you can test them through further research.

“The fact is they’ve put their idea out there and it’s in the public and scientific domain now.”

And the authors themselves are planning on testing their hypothesis by returning to Papua New Guinea to look for more intact samples, according to Mr Kerr.

“We’re going to New Guinea on a trip a year for the next three years,” he said.

“One of the sites we’re digging at is from a late Pleistocene site, and we’re hoping to get more of the species from there.”