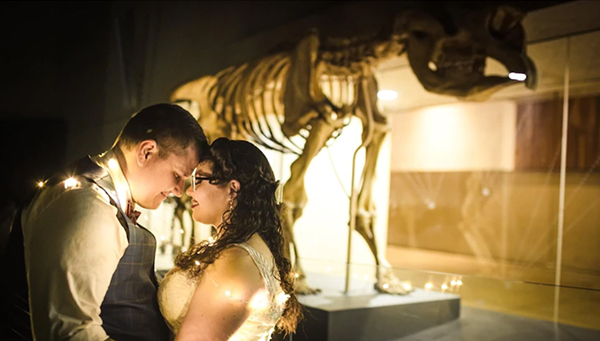 Rupert Say and Christina Chiotakis married at the Queensland Museum in May. Supplied: Karisma Studios.

While many couples choose beach settings and ballrooms for their special day, one Queensland couple has settled on a more prehistoric theme.

Rupert Say and Christina Chiotakis recently tied the knot among 245-million-year-old fossils and giant dinosaur skeletons at the Queensland Museum after first meeting there in 2015.

The couple has worked together ever since as guides at the museum, but it was not exactly love at first sight.

“The first time we met he was working at the Medieval Power exhibition, and I had been there for a year at that point,” Ms Chiotakis said. 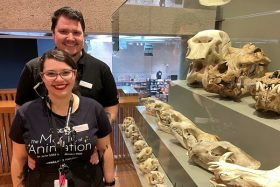 The couple continues to work together at the museum.(ABC Radio Brisbane: Jessica Hinchliffe).

“Our love was a slow burn though because at his first shift I made him clean up vomit.”

Mr Say said it failed to put him off.

“We still dated even after that and we had our first date after work and went out in the city,” he said.

“She pretty much forced me to buy an anime and from there we just started hanging out.

“That’s when I knew I was caught.” 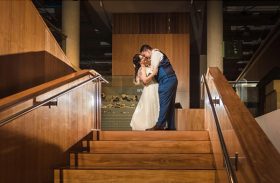 Ms Chiotakis’s love of fossils was highlighted in the photos.(Supplied: Karisma Studios).

The perfect fit for a palaeontologist

Ms Chiotakis also works back of house as a palaeontologist and knew that fossils needed to be part of her big day.

“It was a perfect fit for us to be married at the museum – it was very us,” she said.

“We had most of our photos taken at the Lost Creatures exhibit where all the dinosaur skeletons and the fossils [are].

“Our family and friends were not surprised at all that we chose to get married here.” 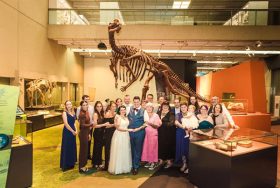 The couple says holding the event at the museum brought all the things they loved together.(Supplied: Karisma Studios).

Their other loves Star Wars and Harry Potter also featured, with a Sorting Hat and droids littered throughout the museum.

“Our cake was also half Harry Potter and Star Wars too and we told the cake decorator that she had creative license to make it,” Ms Chiotakis said.

“We took a photo too where Rupert had a lightsaber and I had a Harry Potter wand and we made it look like I was casting a spell on Rupert – it was a lot of fun.”

For the love of dinosaurs

The dedicated employees said their love for the museum ran deep and it made sense that their major life milestones should happen under the museum’s roof.

“I love getting to see what exhibits we have coming in and talking to children about what they see and how their eyes light up,” Mr Say said. 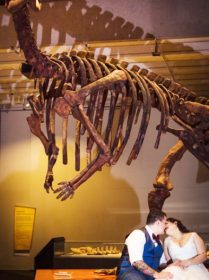 The couple chose their favourite spots around the museum for their wedding photos.(Supplied: Karisma Studios).

“When they see a dinosaur and other cool things it’s great to be able to share that experience with them, whether it’s their first time or 100th time.”

Ms Chiotakis said love for their work and fellow workmates made it easy when organising the May wedding.

“I think that’s why we loved being able to share our wedding with the staff too as half of our guest list was staff,” she said.

“It did make it easier when it came to taking photos as we all knew what we could and couldn’t do.”

After a honeymoon on the Sunshine Coast, the couple is now back at the museum doing what they do best.

“I did miss the fossils when we were away,” Ms Chiotakis said.

“We might renew our vows one day back here at the museum but we just have to make sure there are still fossils on display then.”