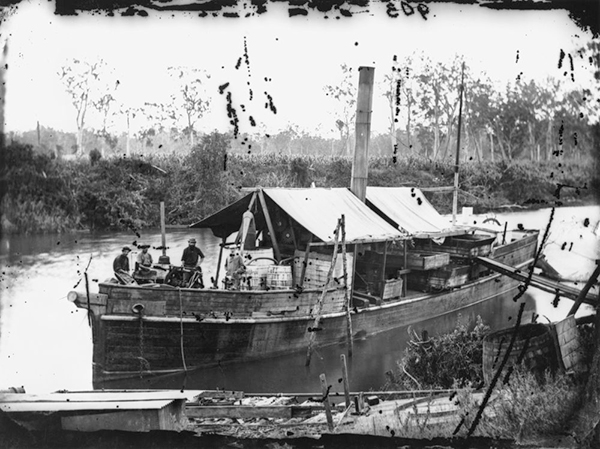 The Walrus on the Albert River, c. 1870. Source: State Library of Queensland.

How one jug in Queensland Museum’s collection can lead to many histories.

Have you ever wondered what moonshine, Queensland farming, and mascots have in common?
Answer: The Beenleigh Rum Character Jug, though perhaps not at first glance.

This jug, held in Queensland Museum’s collection is quite small, colourful and full of character. The “Beenleigh Rum” painted on the front hints at the direct history of this object, but it is the intersecting histories that make this such a valuable and significant piece for Queensland Museum.

The history of the jug begins in Brisbane, 1869 when James “the Bosun” Stewart bought the steamer, the S.S. Walrus, and renovated it to create a floating distillery. He operated in the rivers around Brisbane and as far south as the Logan and Albert Rivers, distilling his alcohol on board. Stewart initially held a distilling license however, despite it lapsing after three years, he continued to operate for another 11, with the floating stills making it easier for him to keep one step ahead of the authorities. It also meant easy access to riverside sugar cane plantations and their mills, where Stewart would dock and create his alcohol from molasses, a by-product of the sugar milling process.

Sugar cane farming was a key industry in late 1800s Queensland and was growing extremely quickly. In 1867 the Australian colony had 116 acres of land devoted to sugar cane farming and by 1879 there were 7778 acres1.

Of all the states in Australia, Queensland was the largest producer of sugar. It could be an incredibly lucrative industry for the farm owners, but not all shared in the prosperity of Queensland sugar production.

In The Early Settlement of the Logan and Albert Districts by W.E. Hanlon he writes the sugar cane estates in the area each had 50 –100 South Sea Islanders working the plantations2. The industry relied heavily on the labour of Pacific Islanders and there was a popular contemporary narrative that the islanders were more suited to hard labour in the Queensland sun. However, it was more likely that they were preferred by employers as they were paid approximately six times less than a European ploughman, and that there was an enduring belief that that type of hard labour was socially beneath a white worker3. Some South Sea Islander workers remained in Queensland beyond their working contract and their descendants make up the Australian South Sea Islander community today.

Cane farming has a long history in Queensland, one filled with pride, but also exploitation. Sugar production is a key industry, that put Queensland on the map.

“The manufacture of rum…increased at the same rate as that of sugar” in early Queensland4. Brothers-in-law Francis Davey and John Gooding planted their first crop of sugar cane in 1865 on their estate they had named ‘Beenleigh’. The manufacture of sugar at Beenleigh was creating excess molasses so the decision was made to distil it into rum.

As luck would have it for the Beenleigh owners, the S.S. Walrus ran aground on the Albert River close to the cane farm in 1884. Rather than salvaging the steamer, the Bosun sold his still to Davey and Gooding and the Beenleigh Estate was in the rum business.

They quickly found success with The Sunday Mail in 1931 declaring, “It can truly be said that the manufacture of Beenleigh Rum is truly a Queensland Industry”5. Beenleigh Rum became an icon of the Queensland industry with a little help from, their iconic marketing image. 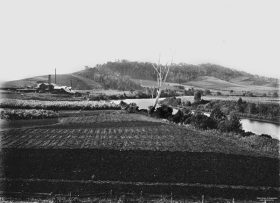 As the popularity of their product increased, Beenleigh Rum introduced a mascot – Bosun Bill – supposedly based on James Stewart, the owner of the floating distillery. He was featured in advertisements and on merchandise like jugs, just like the one in the museum’s collection. The caricature style of this jug is representative of a style of pottery popular at the time called a Character Jug popular since the late 1700s in Europe.

The caricature of Bosun Bill was so iconic at the height of its use, that a man, charged with public drunkenness in Rockhampton in 1924 was asked in court “was it Beenleigh rum you had? You look a bit like Bosun Bill this morning”6. Bosun Bill had been immortalised in the public consciousness through a savvy marketing campaign, placing his face on advertisements, bottle labels, matchbooks, plates, and jugs. 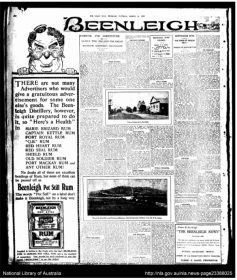 The jug in Queensland Museum’s collection is a link between many histories speaking to past industry, farming, and social habits and continues to have connections in Queensland. In 2004 the Beenleigh Distillery was heritage listed and it remains the oldest working distillery in Australia.

The latest addition to the Regatta Hotel on Coronation Drive is an underground prohibition themed bar. It is named The Walrus Club after the infamous floating still, proving that the history of James Stewart, the original Bosun, is alive and well in South East Queensland today. Cheers! 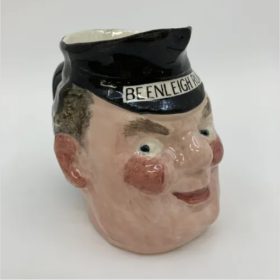 To further explore the Queensland Museum collection, you can do so online or find out more about James “Bosun” Stewart through the QLD State Archives.