Each year children flock to Brisbane’s Ekka to check out the brightly coloured show bags filled with treats, toys and trinkets — a far cry from the sample bags of old.

As the Ekka kicks off for another year, the Queensland Museum has unearthed some of the state’s oldest show bags.

They originated when the Royal Brisbane Show allowed stall holders to give away free samples in 1902 — the very first one held coal.

“It was the earliest sample bag on record, and that piece of coal was worth a lot at the time and many were able to use the coal at home,” said Tess Shingles, the museum’s acting assistant curator for Queensland stories.

“It must have been a big hit, as the tradition of the show bag has continued to this day.” 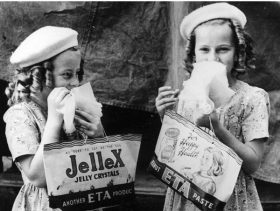 Sample bags were originally filled with produce and edible items that were made and manufactured in Queensland.

“Technically the sample bags were the precursor to the show bags and were originally paper bags,” Ms Shingles said.

“The plastic bags came in during the 1970s and at that time they switched to being more commercial and more about pop culture.”

The Bertie Beetle bag remains a show-goer favourite to this day after first appearing in Queensland in 1963.

“The same company was making Violet Crumbles so they would use the by-product of the honeycomb in the Bertie Beetles.

“Bertie then featured in sample bags for Hoadley’s before becoming a stand-alone bag.”

Another popular sample bag in the 1960s was the Rosella bag, which highlighted pickled products and the quality of its condiments.

“The bag showed people how the pickling process happened and why their particular products were safe and trusted,” Ms Shingles said. 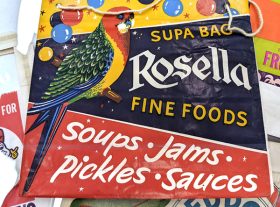 Some of the first toys that appeared in the bags were cardboard pistols that would fire rubber bands.

“The toys were often secondary in the early days to the confectionery and food; many of the toys would be put together when families got home from the show.”

Many of the snack food sample bags claimed to be nutritional for children and were endorsed by health professionals.

“The Twisties bag is funny as it was advertised as the healthy snack and would use a photo of the strongman holding the Twisties,” Ms Shingles said.

“A leaflet was also included in that bag saying that Twisties were recommended by dentists as they were safeguarding children’s teeth and should be on every tuckshop menu.” 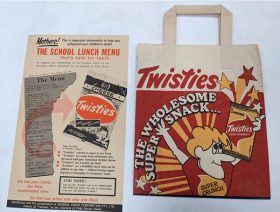 Bags for chips were often displayed as healthy and endorsed by doctors and dentists.(ABC Radio Brisbane: Kate O’Toole).

The museum has also collected Ekka fine art entries from as far back as 1916 featuring button work, embroidery and knitting.

“One of the most iconic pieces is a framed work by a button maker called John Ward, who entered an artwork in 1916 made up of buttons and carved pearl shell from the Torres Strait,” Ms Shingles said. 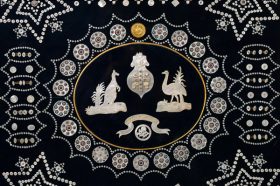 A winning entry from 1916 used buttons and pearl shells to create coats of arms.(Supplied: Queensland Museum).

A knitted christening gown and a handmade dog called Bo Bo also feature in the collection showing the variety of entries over the decades.

“Although it didn’t win a prize, the dachshund called Bo Bo by Elise Hicks in 1972 has a special place in our collection,” Ms Shingles said.

“This part of the collection shows the skills of local Queenslanders and that’s why we keep them as they were exhibited.” 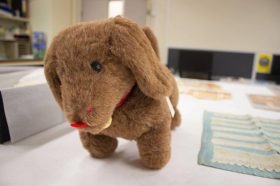 A handmade dog was an entry in the fine arts competition in 1972.(ABC Radio Brisbane: Jessica Hinchliffe).