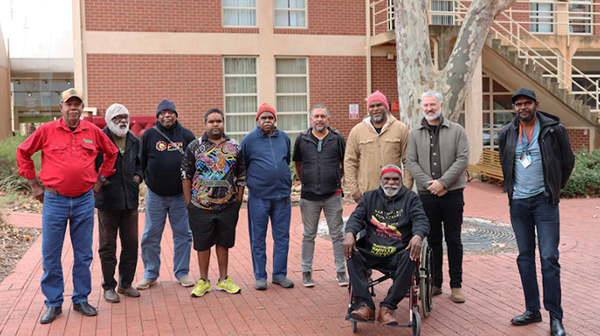 Warlpiri men collect sacred objects from Adelaide after they were returned from the US. Supplied: Iain Johnston.

Sacred Indigenous objects have completed a long journey home to Central Australia after they were repatriated from an American university housing First Nations art.

A group of Warlpiri men from Yuendumu, a remote community about 330 kilometres north-west of Alice Springs, collected the artefacts from the South Australian Museum and finished the final leg together.

The objects were taken last week from the University of Virginia’s Kluge-Ruhe collection specialising in Aboriginal art works.

It holds more than 2,000 items in its collection — the largest of its kind outside Australia.

Senior Warlpiri men Geoffrey Jagamara Mathews and Warren Purnpajardu Williams Japanangka said in a statement they stood strong and would take all their things back, not just in Australia but overseas as well.

“All the objects overseas, if they belong to Warlpiri, they need to come back to our country, where they come from,” they said.

The community leaders said they were pleased to have the objects back in Warlpiri hands but needed help creating a “keeping place for all our material coming home”. 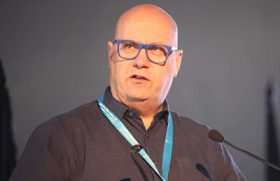 Craig Ritchie says having Aboriginal artefacts returned can be a lot of work. (Supplied).

“We’re opening the gates for other tribes as well, to help people in other places to get their things back,” they said.

The return of the seven sacred objects was part of a partnership between the University of Virginia and the Australian Institute of Aboriginal and Torres Strait Islander Studies.

Institute chief executive Craig Ritchie said the main goal of the program was for Aboriginal and Torres Strait Islander custodians to make their own decisions about their cultural heritage.

“It’s a lot of negotiation, it’s a lot of working through some processes in museums and galleries that can be pretty arcane,” he said.

“But (we are) always keeping in mind, in this case, what did Warlpiri want to have happen to these objects?”

“I think there’s a real change happening in the international collecting community, where there is a real positive predisposition to returning material, because at the end of the day it helps those institutions … be better,” he said.

A private ceremony will be held to mark the return of the Warlpiri material once the items arrive in the Yuendumu community.

The institute estimates there are more than 112,000 items of First Nations works sourced from Australia in more than 300 overseas collecting institutions.