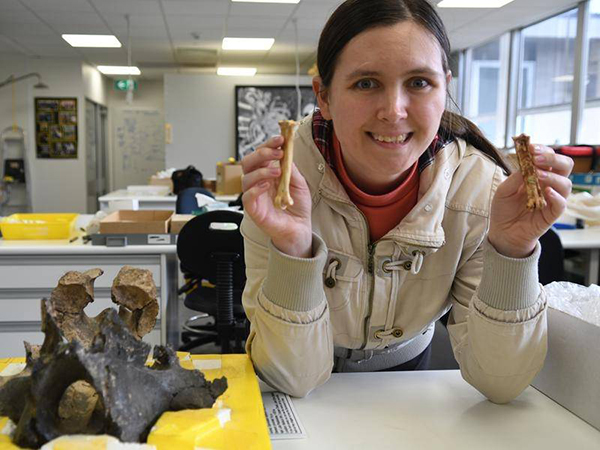 Ellen Mather says the bones of Cryptogyps Lacertosus were first thought to belong to an eagle.

Australia’s first fossil vulture has been confirmed more than 100 years after it was initially thought to be an eagle.

Now renamed Cryptogyps lacertosus, meaning powerful hidden vulture, it lived during the late Pleistocene period between 500,000 and 50,000 years ago, say researchers from Flinders University and the South Australian Museum.

Sharing the skies with wedge-tailed eagles, the extinct vulture also lived alongside marsupial herbivores such as Diprotodon and fierce carnivores including the marsupial lion Thylacoleo.

But the research has revealed that unlike its similar-sized wedge-tailed cousin, Cryptogyps was not an eagle but an old world vulture, a group previously unknown in Australia.

“We compared the fossil material to birds of prey from around the world and it became clear right away this bird was not adapted to being a hunter, and so was not a hawk or an eagle,” palaeontology researcher Ellen Mather said.

“The features of the lower leg bone are too underdeveloped to support the musculature needed for killing prey.

“When we placed Cryptogyps in an evolutionary tree, this confirmed our suspicions that the bird was a vulture.”

But Associate Pressor Trevor Worthy says Cryptogyps lacertosus has now been given a new genus for what was a remarkable species.

“The discovery solves a mystery of what happened to so many megafaunal carcasses when the continent didn’t have vultures,” he said.

“Now we know they were here. They’ve been hidden in plain sight.”

Researchers say the lower leg bones, or tarsus, revealed the bird was a scavenger, not a typical eagle.

“This discovery also reveals that the diversity of our predatory birds was much greater in the past. More significantly, the extinction of vultures in Australia has major ecological implications,” Dr Mather said.

“Vultures play a very important role in ecosystems by accelerating the consumption of carcasses and reducing the spread of diseases.

“The loss of Cryptogyps could have caused a drastic upheaval in ecosystem function for a very long time as other species scrambled to fill its niche.”

The first bone of Cryptogyps lacertosus, a wing fragment, was found near Kalamurina Homestead on the Warburton River in South Australia in 1901.

At the time it was thought to be an extinct relative of the wedge-tailed eagle and it was only in the late 20th century Australian palaeontologists suspected the material could belong to a vulture.

The change was confirmed when Dr Mather compared it with more recently discovered fossil material, including the crucial tarsus, from Wellington Caves in NSW and Leaena’s Breath Cave in Western Australia.

The findings have been published in the journal Zootaxa.