You are here: Home » Articles filed under: 'News' » Article: 'SLM to transform Museum of Sydney'

SLM to transform Museum of Sydney

July 16th, 2022 | Browse other: News. | Tagged with: Museum of Sydney will be transformed into an Indigenous cultural space, Sydney Living Museums | 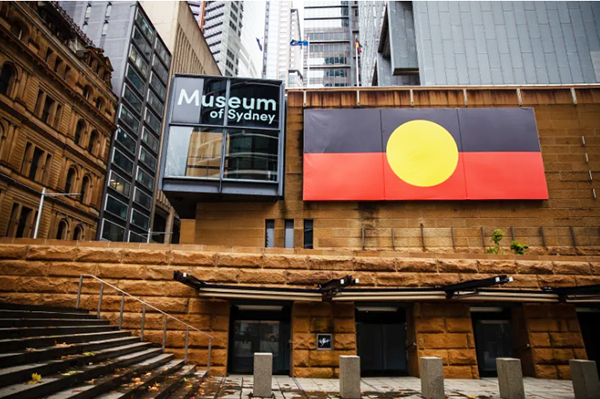 A dedicated Aboriginal Cultural Space will be established at the Museum of Sydney, the site of First Government House in NSW. CREDIT: EDWINA PICKLES.

The Museum of Sydney, the site of Australia’s first Government House, will be transformed into an Indigenous cultural space dedicated to the culture and history of Aboriginal people.

The space was dedicated by the state government on a wet Sydney Sunday to coincide with the start of NAIDOC Week.

As part of a celebration of the announcement, Indigenous dancers and a host of families explored the current interactive Indigenous exhibition, which recreates the Dreaming tracks that map the routes of Ancestral beings across Australia.

The new space will be similar to the current interactive Walking through a Songline exhibition and feature voices, significant stories, truths and histories of Aboriginal culture and people.

The site’s existing collection will be reinterpreted and contextualised to represent Aboriginal stories and perspectives by shining a spotlight on Indigenous languages as living culture.

Premier Dominic Perrottet said the initiative is part of the government’s broader commitment to deliver outcomes for Aboriginal people and the wider community.

“The Aboriginal cultural space will be a place where the community can talk openly and constructively about history and culture,” he said.

“The decisions made and actions taken at the first Government House had profound and long-lasting impacts on Aboriginal people across this country and region.

“This site will create a place for these stories and perspectives to be shared, while celebrating the enduring living culture of Aboriginal people,” he said.

The space will be established progressively by Sydney Living Museums in partnership with the Aboriginal Languages Trust after extensive consultation with the Aboriginal community, and a series of exhibitions, public programs and workshops will then take place on site. 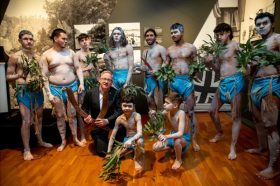 Indigenous dancers at the Museum of Sydney on Sunday, where Minister for Aboriginal Affairs and Arts Ben Franklin announced a new dedicated Aboriginal Cultural Space will be established at the site of First Government House in NSW. CREDIT: EDWINA PICKLES.

Minister for Aboriginal Affairs and the Arts Ben Franklin said Australia should be a society that remembers, talks about and reconciles with its past.

“Our history matters and it is filled with moments both dark and delightful. To acknowledge our past effectively, we need spaces where difficult truths and uncomfortable perspectives are free to be expressed,” Franklin said.

“History is happening now and we will work tirelessly with partners and community to bring into being a place that will engage with the past with a mind for the future.”

“There’s an expectation from community to bridge the gap between institutions and community and we want to do as much as we can to make what we have as accessible, honest and relevant as we can,” White said.

“For Aboriginal people, languages are part of our living culture. It is a fundamental part of identity – a physical, intellectual and spiritual connection to culture, country and community,” Behrendt said.