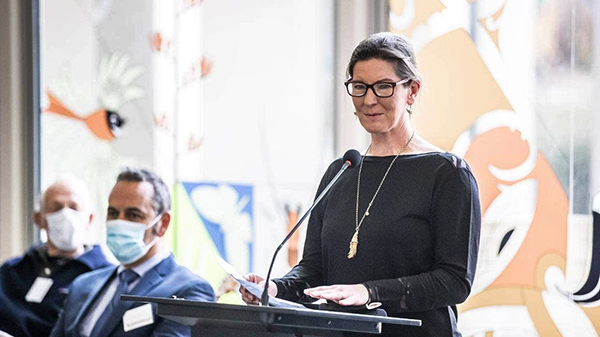 Susanna Shadbolt has returned to Te Manawa as chief executive after leaving the museum in 2015 to direct the Aratoi Wairarapa Museum of Art and History in Masterton. DAVID UNWIN/STUFF.

The new face of Manawatū’s regional museum is bringing her wealth of knowledge and experience to the role with a vision to transform it into a “museum of the future”.

After leaving the museum in 2015, she directed the Aratoi Wairarapa Museum of Art and History in Masterton and taught museum studies at Massey University.

Te Manawa Museums Trust chairman John Fowke spoke on behalf of the board and said he was overjoyed with her appointment and the new knowledge and skills she would bring from her work at Aratoi.

“She has been working over the hills in the Wairarapa where she honed her skills and developed them, and now she brings them back here to the community in Manawatū.” 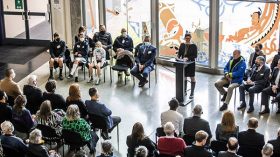 DAVID UNWIN/STUFF
A crowd of around 80 people welcome new chief executive Susanna Shadbolt to Te Manawa. She is joined by Husband Darren and their three children Mila (9), Sienna (12) and Santiago (14).

Fowke was eager for Shadbolt to bring fresh focus, honouring and building on the past while pushing forward with her own flavour, and said the board was looking forward to her taking on the job with excitement and anticipation.

“Susanna is a proven champion for the arts and cultural sector. Her extensive background in museum and gallery practice, education, and business will be of enormous benefit to our mission.

“I think it’s safe to say the future is in very capable hands.”

Shadbolt said she considered Te Manawa her turangawaewae, and cared deeply for the community as well as the museum’s history, legacy, its collection and its people.

The museum had been her first job after flying from Germany to New Zealand 20 years ago, and she had watched the museum go through many changes, some good and some less so.

“As chief executive, I would hope to build on the best parts of the museum’s legacy, to extend and enrich the roles that Te Manawa has beyond the audience-focused activity and really push its potential to serve as an agent for change.”

In March 2020, Shadbolt was accepted into the Museum Leadership Institute at Claremont Graduate University in California’s Executive Education Programme for Museum Leaders.

The programme addressed essential topics in the museum and gallery sectors, such as audience engagement, diversity and inclusion.