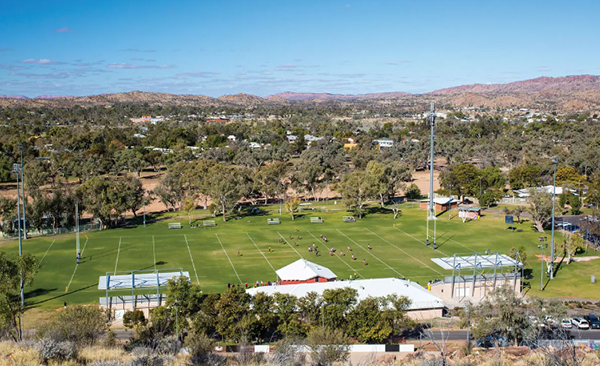 A football oval in the Australian outback town of Alice Springs might seem like an unlikely site for a raging cultural controversy. But plans to build a A$150m ($111m) Indigenous art gallery on Anzac Oval have brought out the fighting spirit in a First Nations woman who believes the development would be “a desecration”.

Doris Stuart Kngwarreye rejects the recent announcement of the Northern Territory (NT) arts minister Chansey Paech that the proposed National Aboriginal Art Gallery (NAAG) will be “the jewel in Mparntwe’s crown” (Mparntwe is the Aboriginal Arrernte people’s name for Alice Springs). In March, the NT government awarded a multi-million-dollar design tender for the project to BVN Architecture and Susan Dugdale & Associates. 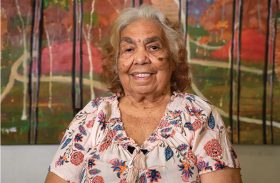 Stuart Kngwarreye maintains her longstanding opposition to the gallery. She says its foundations would disturb sacred rocks traversed by songlines—the ancient tracks of ancestral spirits that are integral to Aboriginal culture—and interfere with other important sites nearby. “It’s covered in sacred sites here,” she tells The Art Newspaper. It is culturally wrong to overlay Mparntwe culture with stories from other Australian skin groups, she adds.

[The land] owns us. We don’t own it. You do not put a price on something as precious as that

Stuart Kngwarreye is a senior apmereke-artweye (traditional owner or decision-maker) for Mparntwe. Her duty, handed down by her father, is to protect sacred sites and stories on her people’s lands. As she told the NT Civil and Administrative Tribunal last year, the land “owns us. We don’t own it. You do not put a price on something as precious as that”.

The tribunal adjudicated last year on the NT government’s proposed compulsory acquisition of the Anzac Oval site to make way for the gallery after negotiations with Indigenous people broke down. Senior counsel acting for Alice Springs town council told the tribunal that the land deal would have “deleterious effects on matters of profound cultural significance” and that there was evidence the government had not consulted all relevant custodians. The Art Newspaper understands the gallery project has been extremely divisive in Alice Springs, with more than one Indigenous perspective being held.

In September the tribunal recommended the NT government undertake more consultation with Indigenous people. Paech says this has happened. The government’s acquisition of the oval is now in its final stages, as the town council decided earlier this year that further legal opposition would be too costly. The town’s new mayor Matt Paterson has called the gallery a “game-changer”.

But Stuart Kngwarreye says government contact with her came late, and she never heard back after she asked for everything in writing. She is not giving up the fight, and hopes to escalate her case to a national level while Australian politicians are in election mode for a 21 May federal poll.

“They can’t build [the gallery] without federal money,” Stuart Kngwarreye says. According to spokespeople, neither the centre-right Liberal-National federal government nor the centre-left Labor opposition has decided whether to fund the project in Alice Springs. The NT government says it will pay A$50m ($37m) towards the gallery’s construction and raise the other A$100m ($74m) itself if federal money is denied.

Meanwhile, Adelaide’s A$200m ($149m) development of an arts centre dedicated to Aboriginal and Torres Strait Islander cultures is being jointly funded with federal (A$85m) and South Australia state (A$115m) money. Tarrkarri—Centre for First Nations Cultures, which broke ground in December and is expected to open in 2025, is being designed by the New York-based architects Diller Scofidio + Renfro, and the Adelaide firm Woods Bagot. Tarrkarri ( “future” in the Indigenous Kaurna language) will display collections in storage and focus on contemporary artists and new technologies.