September 22nd, 2022 | Browse other: News. | Tagged with: How can live art be held in museum collections?, Tate explores “live art” in museum collns | 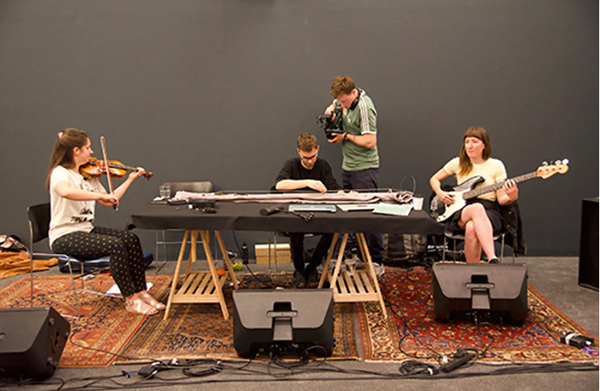 Charlotte Jansen, How can live art be held in museum collections? Tate conference to share its conclusions, The Art Newspaper, 14 September 2022

An online conference backed by a research project will explore how institutions can care for time-based, live and organic art.

In 2002, two years after it first opened to the public, Tate Modern announced “a radical new location for collection, curation and display”—outer space. The director of this bold new frontier, Tate in Space, was the artist Susan Collins. A satellite owned by Tate, she said, would orbit the earth. On board, guests would be invited to take part in a bespoke educational programme.

None of it, in fact, was true. “Many believed the fiction”, says Pip Laurenson, the professor of conservation at University College London. “Including the British authorities, who wanted to check she had the right permissions to launch a satellite.”

Collins’s project turned out to be visionary, for it explored a trend which is more and more present in contemporary art—the way the workings and role of a museum itself can become an artist’s primary focus. But how can these works, often now referred to as “time-based media” for the way they respond organically to a moment in time, be held in the archive of a museum and made accessible and understandable to future visitors?

This discussion will be explored at Reshaping the Collectible: Learning Through Change, an international conference organised by Tate (14-16 September), during which leading curators will debate the questions—both ethical and technical—that surround the preservation and management of time-based media, performance and so-called “live art” in museums and institutional collections.

Time-based artworks are often created to exist in a single dimension or form. They live for a precise period of time, and are meant to be experienced only for that specified duration. Their existence naturally eschews the conventions of a museum’s collection and display structure. Preserving them therefore presents conservators with plenty of challenges. “A curator understands that the form of the artwork might take on a new life in the museum, which could be very different to the way in which it was first presented,” says Laurenson, the project lead for the conference. “There are artworks entering the collections of Tate, MoMA and Pompidou that challenge the very idea of a museum object. Artists whose works are coming into these collections can have a profound impact on how conservators think, so these collaborations provide opportunities for museums to imagine themselves anew.”

The care of material culture

Kate Lewis is the chief conservator at the Museum of Modern Art (MoMA) in New York, and oversees its conservation department. Her work focuses on the access and display of MoMA’s collection. “How do works first created and performed six decades ago remain vital and seen? How can we ensure that their integrity is maintained?” Lewis asks. “These are fundamental questions for museums when acquiring time-based, live, performative and digital artworks.”

“Decades of research have been focused on the care of material culture, which has concentrated on the care of objects,” Lewis says. “But contemporary art is a rapidly evolving arena of new mediums and new practices that dive into very urgent issues.”

As part of a 2018 research grant from the Mellon Foundation, curators at Tate revisited Tony Conrad’s 1972 experimental music and film work, Ten Years Alive on the Infinite Plain. They worked closely with those who first performed the work and collaborated with Conrad to better understand how it should live on in the Tate collection, creating guidelines for future activations of the piece.

Louise Lawson, the interim head of conservation at Tate, sees the conference as an opportunity for those involved in museum conservation to “look anew at how we think about and do our work.”

“A vast breadth and depth of expertise is needed to manage forms of live practice that emerge from very different roots and traditions,” Lawson says.

“The world has changed enormously since Conrad’s project was first conceived,” says Laurenson. New research will be presented at the conference, using Conrad and Collins as case studies. Perhaps one day, the conference can be archived in a satellite, radically curated and displayed, then sent into outer space to orbit the earth.